(As always, my generalizations are based on a whiff of a shred of a morsel of evidence.)

-Don’t bargain for a haircut in Colombia.   I learned this the first time I was here, and I looked scalped.   This time I got another haircut, paying the standard price, and after an epic performance by the barber, I looked ridiculous with a poofy Spandau Ballet ’do.   When you are losing your hair barbers are afraid to cut anything off the top so you end up looking like Ted Koppel or Eraserhead.

-Colombia has been in the drug doldrums for so long, there is an optimism in the air, positive change is on the horizon.   In spite of or because of the fluid situation in the country there is a playfulness in Colombians I like very much.   They have great senses of humor and are always ready for a good time.

-Colombia is kind of schizo in that it uses pounds and gallons, but meters and celsius. (Gas is US$4 a gallon) 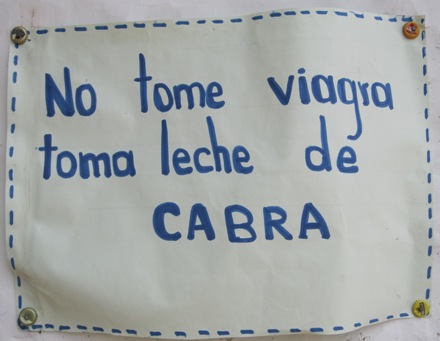 What’s wrong with this picture below? 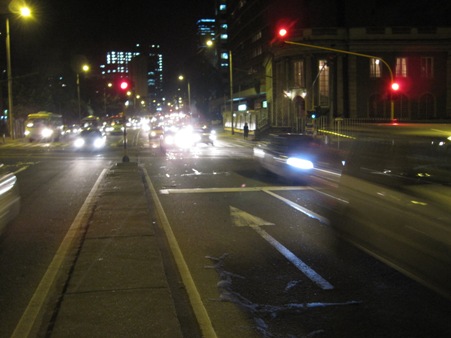 Why is everyone driving on the wrong side of the road?   (See the red lights facing the other way and the arrows on the road.) Because they are showing off their progressiveness. During rush hours they make roads one way coming and going to town to ease traffic.

-Bogota has ciclovia, where every Sunday for half a day large swaths of the city are taken away from motorists and given to cyclists, joggers, walkers, and anyone wanting to enjoy some peace and quiet.   And it isn’t a token thing done on the main drag downtown, it is for a surprisingly large number of busy streets.

-There was Panini fever in Bogota.   All over town you heard the cry, “Panini! Panini! Panini!”   They are selling little soccer stickers for the upcoming World Cup–and Colombia isn’t even in the tournament!   There was a brisk trade on many streetcorners and people had out their want lists.   It brought back nice childhood memories with baseball cards.

-Most surreal moment of the trip: singing a Norwegian pop song by  a bonfire just outside of San Gil. Guitar hero Eivind brought his mighty axe and  we tried to remember enough words of “Idyll” by Postgirobygget (me, because it had been a long time and he, because he was so drunk):
“Det var ol, berusende ord
det var sommer, det var sol
det var hjerter i brann
blikkstille vann
alt pa denne jord…”
Ah, good times.

-Tomorrow I fly out at 7:20 am, and I am far away from the airport.   Is flying out at 7 am—meaning waking at 4:30 am, say—worse than arriving at 2 am?   I can never sleep the night before since I am afraid I will sleep through my alarm clock.