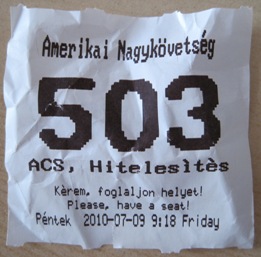 I decided to get my passport renewed even though it has  one more  year’s validity  since rates are going up by  50% next week.    Plus, some countries won’t issue you a visa if you have less than six months validity to your passport.

I only got ticked off once at the embassy here in Budapest, a new personal record. I somehow extracted the information that I could get a passport with 52 pages as opposed to the usual 28(?), but who knew that was possible? I don’t see it on the website and who wouldn’t want that option?

Nowadays all passports are processed in USA, not like before in whatever country you were in. It takes a week. It’s $110 for a passport renewal and $82 to get extra pages in your passport. I still can’t get over the latter; issuing a passport has to be a much bigger effort than slapping in some new pages. The State Dept is shooting themselves in the foot by doing this. The ability to get a 52 page passport changes the equation somewhat, but what will I do when the passport is full? The difference in cost isn’t that great. What would a more devious person do? Someone else might claim that their passport has been stolen and sell it on the black market, the chip inside the passport notwithstanding. There has to be demand no matter what so-called foolproof security measure has been implemented.

What photo do I look at more than my passport photo? I was able to use an old homemade photo this time which is only good in that at least I know what I am getting. The only thing I can say about it is that it looks less heinous than the old one, which gave me gastroenteritis just from the briefest of glances.