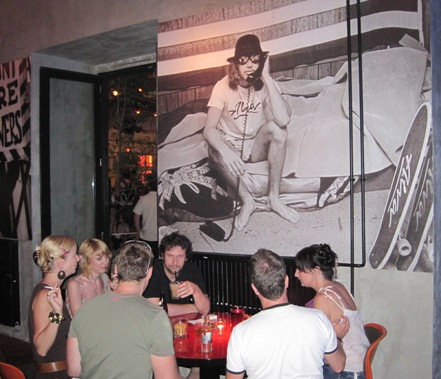 This is from a happening bar where all the beautiful people go (I walked in quickly and closely behind a group), but recognize the dude in the blown-up photo here? That's Tony Alva, ancient skateboarding legend.

We watched the Holland-Spain World Cup soccer final in a part of town that I hadn’t been to since 2005, which coincidentally was the last year Arjen Robben passed the ball. It’s a shame the final can never be as wide open and fun as the third place game.
Tomasu pointed out that the only unbeaten team in the tournament was…New Zealand! (3 ties)

Some passports and stamps I bought at the flea market for about $14. A funny thing about the open passport is the woman signed it, "Mrs. Istvan Pinter", her husband's name. I think I bought this from the woman herself; it was kind of awkward bargaining with her.

I swear, I have listened to this song 5 billion times this weekend, no exaggeration. I am man enough to admit it. It’s very polarizing; give it 60 seconds of your precious life and you’ll love it or hate it.
And for those of you who have never seen me dance, you can’t say you have lived a complete life.