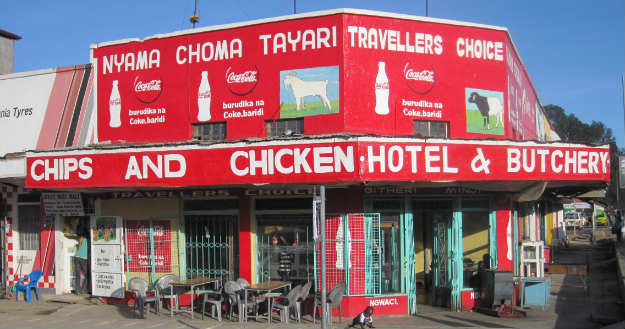 While changing matatus (buses) in little Naivasha town I was shocked to see a bunch of glue-sniffing kids strung out on the sidewalks by the bus station just like in the video I posted recently. I reckon I have seen a lot in life and am not phased by much, but glue-sniffing kids always scare me. I figure they are fearless as it’s as low as one can go; they are the true nihilists who may as well end it all since they are destroying their brains anyway.
I asked a woman about it and she claimed they all had families; it was just what they did in the day.
Anything on my mind vanished when I arrived in Fisherman’s Camp, an idyllic spot on the south side of Lake Naivasha about 100km northwest of Nairobi. People come here because it’s the opposite of Nairobi and there are a few popular national parks nearby. One, Hell’s Gate, can be considered Safari Lite as it is $25 to get in with a bicycle and ride among lots of animals, as opposed to over $100 a day for the major parks.
I was impressed at first sight walking in from the road. It was so beautiful, so green. Southern Kenya is green. It’s the first expanse of green I’ve seen in over three months of traveling and it’s not even rainy season yet. The gently sloping grounds had only tall trees with perfect foliage, and a jetty with a desk to the end of it(?!) 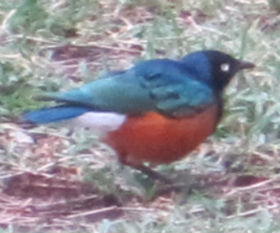 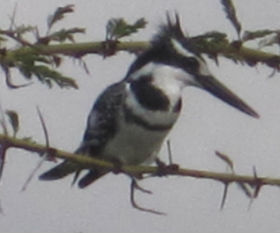 The campsite was full of birds and monkeys—two kinds of monkeys, vervets and the skunk-like colobus—and I could hear the nearby hippos’ snorts and grunts, the loud screech of a large ibis, and most plentiful were a colorful, seemingly luminescent blue and orange-breasted bird supposedly called a superb starling.
At night I could watch a few hippos closely from behind a tree (and from behind an electric fence, I must add, because after malarial mosquitoes, I read that hippos kill the most people. Matatu drivers must be number three.) I watched them graze while avoiding monkey droppings from above.

I read that “Tomb Raider” and “Out of Africa” were filmed nearby. I do nothing much more than hang around and gaze out on to the lake; it’s very relaxing here. 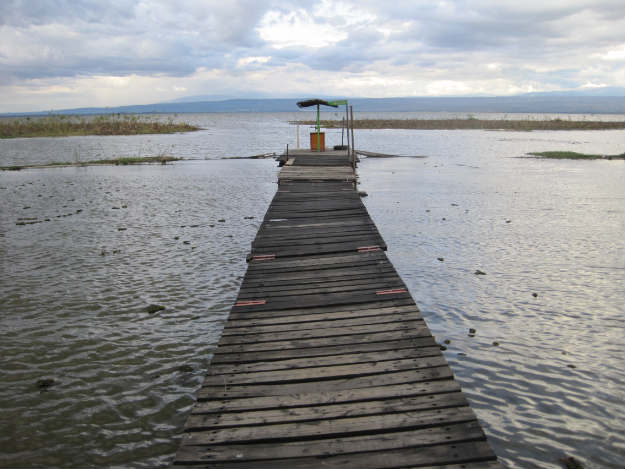 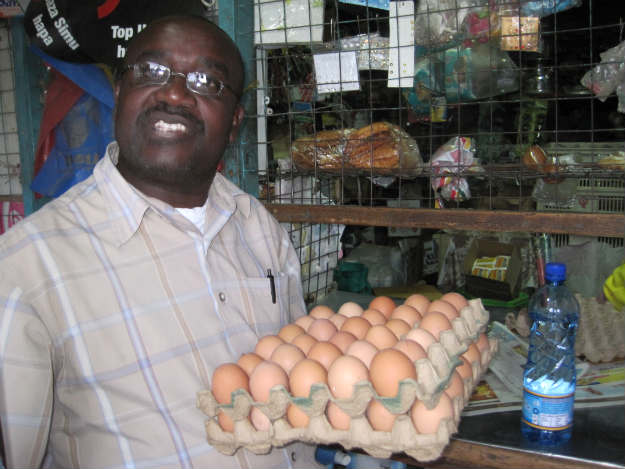 Kenyan Egg Economics
This man above was at this shop to sell his eggs for 8 shillings each. The shop sells the eggs for 10 shillings each. He said it costs him 6 shillings an egg to produce. (I love having open, honest conversations like this because where in the so-called developed world can you ask someone, “What is your wholesale price and how much profit do you make?” and if the shop owner knew his cost was 6, would she squeeze him to sell for 7?)
He says he produces 500 of these 30-egg trays a week and sells all of his production in two days, so he makes a profit of 60 shillings per tray, multiplied by 500 trays is 30,000 shillings profit a week, which is about $375. I remarked that it was very good money, and he agreed, pointing to his flashy new truck outside. It wasn’t even his main job. He was an engineer.
How he could sell so many eggs? Because people are poor. He held up four eggs. “This costs 40 shillings for a family to get protein. A half kilo of meat is 150 shillings.” Case closed.
When I told all this to the girl at the reception at the camp, the only thing she said was, “Is he married?”