Everyone who comes to Lamu stays a long time. It’s by default that everyone gravitates to here. Where else can you go? Long-term travelers need a break, and Lamu fits the bill. It’s quiet, small, cheap to sleep, cheap to eat, there’s a beach, it’s probably safe—all these things that girls especially find appealing. One such girl, a sweet, statuesque, Rapunzel-haired Amazon from rural Ohio(!) who calls herself “Ash” (I need to start calling myself Wildfire or Stardust) is here semi-involuntarily because she has to go back to Uganda and there are riots there. I intend to go to Uganda, too, so it may foil my plans.
Ash told me an incredible story. She was in a hostel in Uganda and a British backpacker was vomiting blood for some reason. They rushed him to the hospital and whatever it was, they needed to fly him home, but he had lost so much blood in the meantime that he apparently wasn’t going to survive without a transfusion, so four travelers from the hostel who had the same blood type donated, and they donated more than usual, causing all of them to stay in the hospital for a day and a half. The Brit’s life is saved, he is good enough to go home, and he leaves without even saying thank you or getting her email! “Ta!”
An American guy here has overstayed his 3-month tourist visa by almost 3 years. He was unperturbed about what he would do when he decided to leave. I would be dreading my options. The corruption here is legendary and the penalty would be ugly if the Kenyans ever caught him, so what would you do in his situation? Sneak into Ethiopia and “lose” your passport? No, everything is supposedly computerized there as here. I don’t know what options you have. Somalia passports can be bought for $60 on the streets of Hargeisa, Somaliland. Maybe he could pass for a Somali (cough!) Good luck, bro. You probably have a book deal coming out of it. 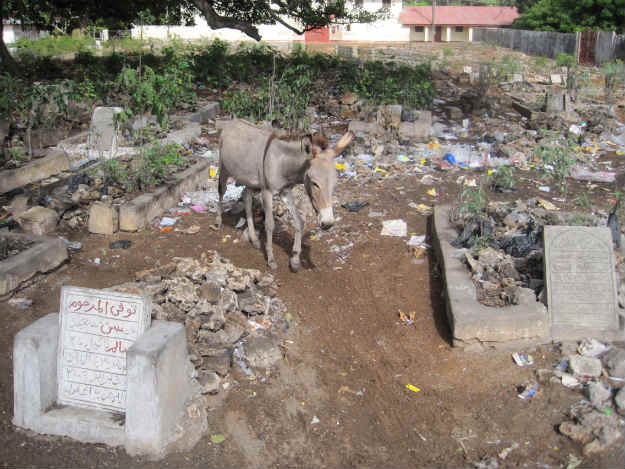 A graveyard doubling as a dump 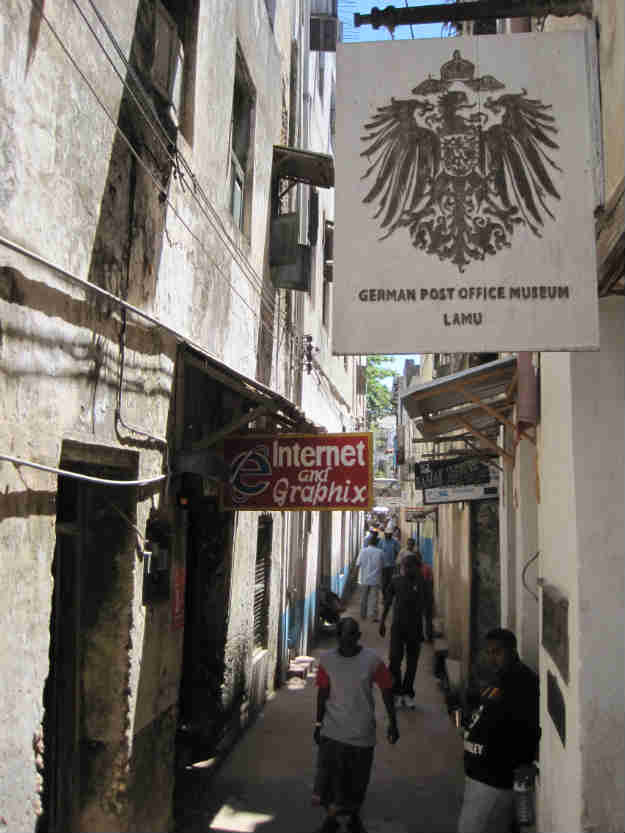 This is on the main street. I've passed by it dozens of times but I always expect to see two guys standing under it, one saying to the other, 'See, Klaus? I told you! Now pay up!' Who would expect to find such a museum in Lamu? 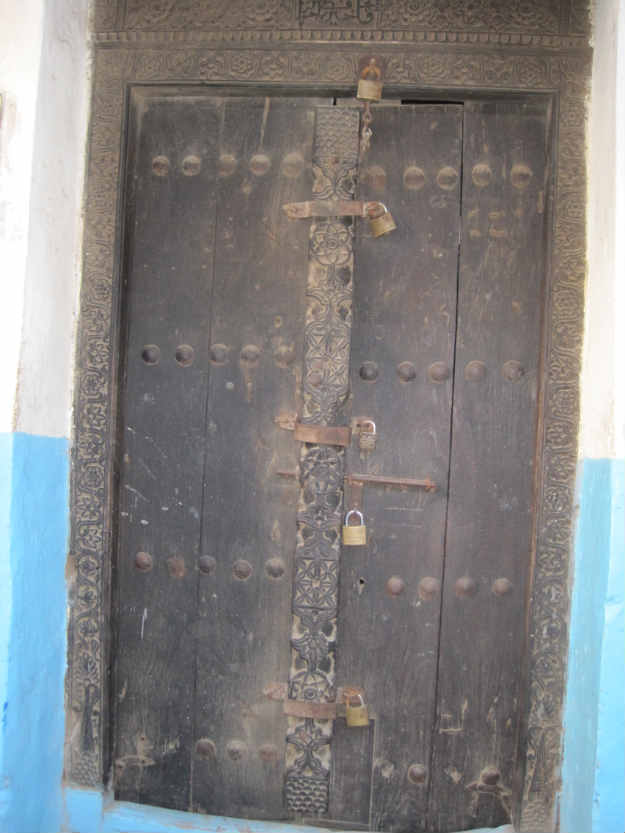 Lamu is famous for its wood carvings on doors. I can appreciate the craftsmanship, but what catches my eye are the FIVE beefy locks on the doors. It's only a simple, small general goods shop. Why would someone need five locks if Lamu is so safe?

I was at the Casuarina Hotel with its excellent location and 500 shilling (US$6) beds with sea views, but it’s otherwise hard on the body and mind and was slowly making me crazy. Plus, there was a major security breach: two mosquitoes managed to get inside my mosquito net one night, and I got some bites. I’m considering legal action.
I changed to another place around the corner called Lamu Guest House. I lost my sea view but there is a huge bougainvillea out the back window that I know my mother would appreciate. The owner is an old fourth generation Indian (Gujarati) muslim who showed me all four levels, and then needed to lay down the rest of the day because of overexertion. I felt bad.
I’m optimistic about getting some sleep, but it’s difficult anywhere. Beds are in rough condition. The sound of the muezzin, the call to prayer, is a loud one here, especially when it is next door. Hostel websites always seem to forget to mention adjacent mosques, but it’s hard to be away from a mosque. Braying donkeys are impossible to avoid, too. (Donkeys bray, right? They make that Eeyore sound?)
I had two choices of pictures to show Lamu’s waterfront: the standard pretty shot or the half-submerged police boat with the Casuarina Hotel in the background. I couldn’t decide: 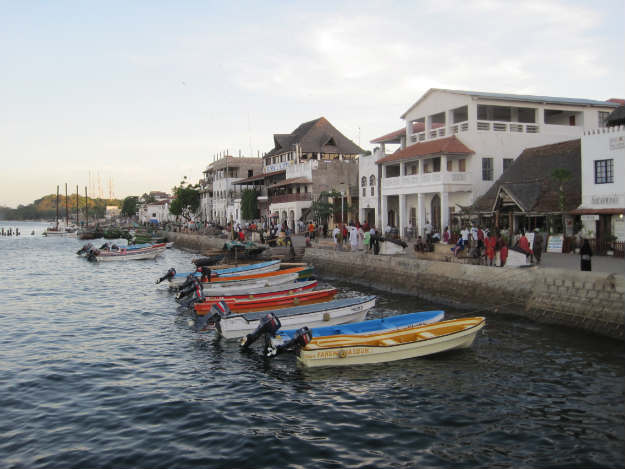 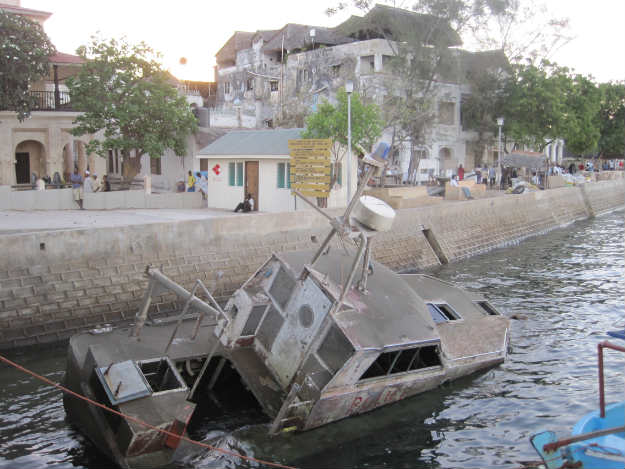 Brad Pitt and Angelina Jolie have a place just across the channel from Lamu town, I’m told. Everyone wants to soak in this atmosphere, but the quaintness and cross-cultural shock of seeing oddities like a Maasai man in full tribal outfit working in a fifi boutique selling local crafts might be coming to an end. There are huge plans for this area. Despite the problems with Somali bandits, Lamu is going to be home to a new port and pipeline with new rail and road connections, all to bring Sudanese oil to world markets. It is going to change Everything with a capital “E”. 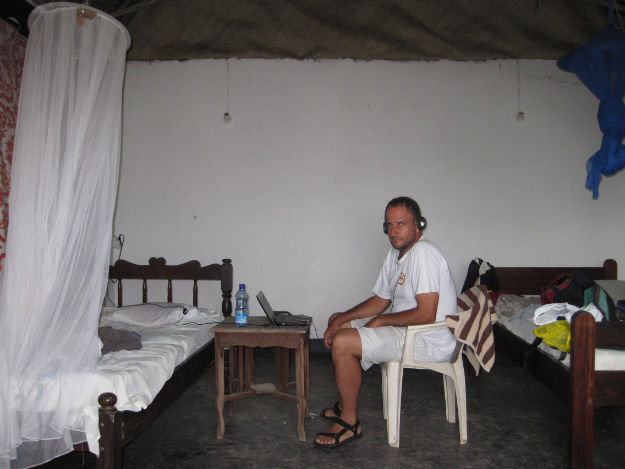