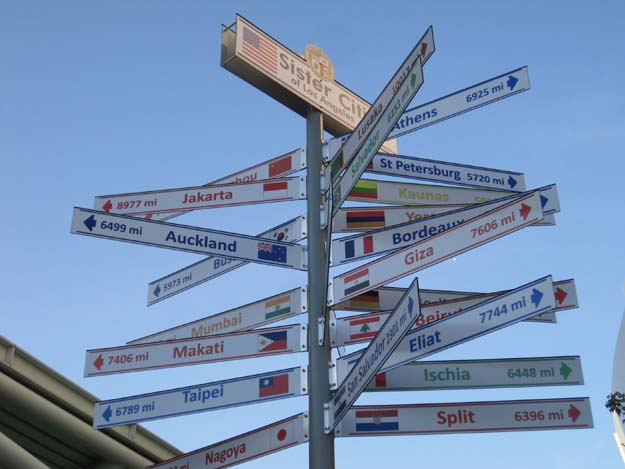 LA's mother must have been pretty promiscuous to have so many sisters and some of these are illegitimate. Makati? Giza? Those are mere suburbs. Ischia? That's not even a city! And would it kill you to spell-check 'Eilat' before you threw it up there? Embarrassing.

I impulsively got up at 3am on Sunday and drove five hours to Los Angeles to see the LA Travel Show. I’d never been to a travel convention and wanted to see what goes on, plus, it’s southern California. 80F (27C) in late January! It’s paradise, you need to know.
Well, not for everyone. It’s odd that you can be downtown in America’s second biggest city on a Sunday morning and hear a pin drop, and that’s because it feels like the only people around are the homeless.
Foreign visitors to America are always surprised to see how many fat people and how many homeless there are (and the longer I stay here, the more likely I will become both). The irony is that Americans often ask me how I can cope with the intense poverty in, say, India, but it’s in San Francisco and LA where you are confronted with more beggars. Times are tough nowadays, but it has always been that way.
I digress. 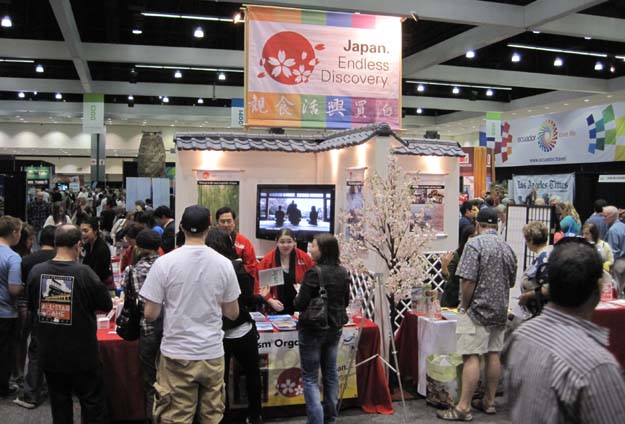 Since the Japanese booth gave away a Yakult probiotic yogurt drink, I forgot all my antipathy.

I got a tic as soon as I saw that the Japan National Tourist Organization was here in full force. I’ve always thought that Japan should be paying me to be their full time ambassador. I know how to sell that country to tourists. I thought of broaching the subject with someone, but I also don’t want to go to Japan anytime soon. Nevertheless, I anticipated picking a fight with the whole booth. It would start with an argument about their tourism promotion strategy, voices would rise, tensions would escalate, and three—no, fifteen—security guards would be needed to hold me back as I frothed at the mouth, “Let’s take this outside!”

The show is mainly lots of boring tour companies mixed in with national tourism boards making a pitch for themselves. It was telling that Taiwan tried very hard to get noticed, that the Koreans felt uncomfortable trying to get noticed, and that Azerbaijan gave away tourist literature that was hundreds of pages thick and very heavy. I love stuff like that.
I became tired and hoped to find the Swedish Tourism Board ensconced in a corner. I was sure they’d have hammocks because Sweden is primarily for sleeping. I get drowsy just typing the word “Sweden”. 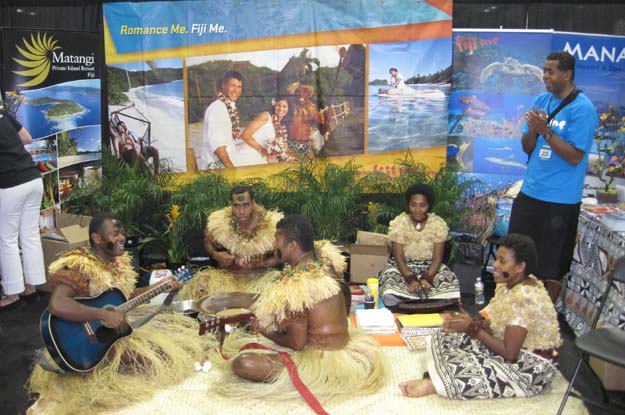 The Fijians seemed chagrined that they chose to go for the authentic look.

I realized that I should have gone to the Friday session which was only for people in the travel industry, but am I in the industry? I didn’t want to make a scene, you know, “I’M NOT IN THE INDUSTRY?! I’M NOT IN THE INDUSTRY?! MY 26 GOOGLE+ ACQUAINTANCES BEG TO DIFFER!”
As it was, Sunday’s program had spellbinding offers such as a 45 minute talk called “Navigating LA’s Airports”. Seriously? Did I miss “Knowing your Greyhound Station’s Toilets?”

Oh yeah? You want to go tete-a-tete avec moi, mon frere? I so badly wanted go and heckle, but I went to see Rick Steves instead.

The Big Kahuna of speakers was Rick Steves, he of the guidebooks, TV and radio shows, and who must have been steamed that Lisa Ling had top billing. (Lisa who? Exactly.) He was a great inspiration to me when I began traveling with his emphasis on getting off the beaten track. I always wondered why he bothers doing tours, which can’t be fun, but he said that’s where the money is. The books do make a profit, but it goes back into the research for the next edition.
I know some people regard Rick Steves’ folksy Mr. Rogers voice as akin to fingernails on a chalkboard, but they would be surprised to hear him speak in public. They’d also be surprised by what he talks about.
It’s fun to see someone so at ease with himself, who speaks like he doesn’t care what people think, and I knew he was going to go off on non-travel topics, particularly marijuana. The crowd seemed to not expect it, but the crowd skewed old, the type that asked questions in the following Q & A about what rental car company in Spain to use or what part of southern France they should see in five days, but Rick Steves wanted to talk about the legalization of marijuana. He spoke for a few minutes and then stopped himself, saying that if we want to know more about it to “just google, ‘Rick Steves marijuana'”. 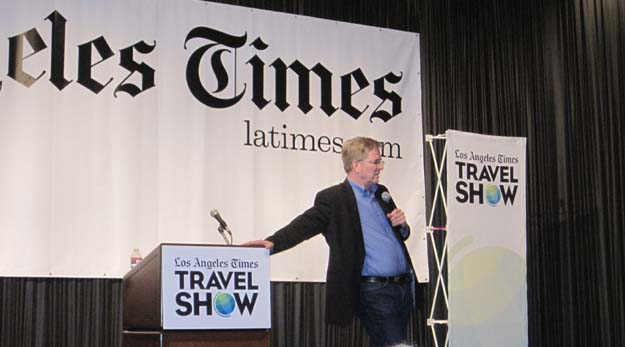 Rick Steves still packs them in. Next year in this room I will be giving a talk titled, 'Effective Hitchhiking Techniques for Northern Thailand' and there will be three people, two of them homeless. 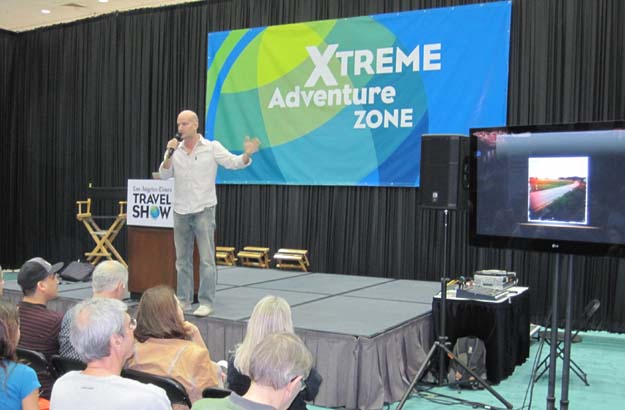 The only thing in my wheelhouse was this talk given by the guy above, Leon Logothetis, He wrote the book every traveler wants to write, “Amazing Adventures of a Nobody”, and was discussing the Mongol Rally that I blogged about last week and The Kindness Cab, which is driving from NY to LA in a British taxi and giving everyone free rides, an inspired idea.