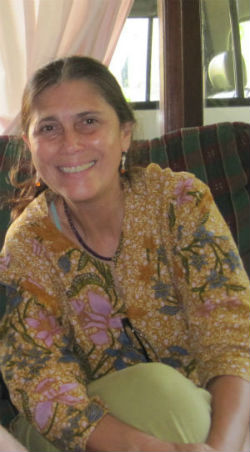 I made a second visit to Bumi Sehat Foundation, this time meeting with the founder herself, Ibu Robin. I’d barely arrived before I was led into a room where a woman had given birth 25 minutes earlier, I was told, exhausted mother and baby not seeming to mind the intrusion. Robin seems to spend a lot of time with people like me who just show up and want to see what’s going on and ultimately, wonder how to help.
She won $300,000 as her CNN Hero prize, but it’s had an unexpected detriment: her regular donors turn off because they assume she has enough money now, which is not the case. She’s building a big clinic up the street instead of the makeshift facility they use now. The lease is expiring in two years and she needs to build the new one from scratch to make the transition seamless, but doesn’t have enough money yet. While she loves the “Eat Pray Love women”, as she put it, the people that were inspired by the movie to come over and volunteer their time, what she really needs most now is cash.
As I mentioned last time, her clinic has become a place to handle all of the community’s crises. She told story after gut-wrenching story about what goes on, some of it hard to believe: unwed mothers are shunned in society, leaving some without any choice but to turn to prostitution and then when she becomes pregnant, the kid is taken by the pimp and raised for its organs to be harvested. She said just recently a woman who bled to death because her husband didn’t want to pay the 10,000 rupiah ($1.10) for transport because he didn’t think it was serious enough and bought cigarettes with the money instead.
I can imagine why potential donors can be reluctant to give their trust. There are plenty of scams in Bali as shown by this BBC podcast about phony orphanages. I can only say I liked what I saw and especially that they try and deal with everyone who shows up at their door for whatever reason. This is the link again if you are coming to Bali and can bring something from the wishlist. 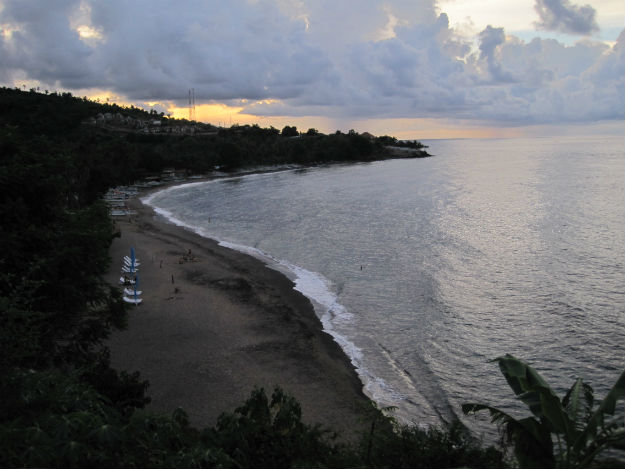 My last blog post, the “Ubud on $10 a day” declaration, caused a ruckus that didn’t go over well with some of the people on Lonely Planet’s Thorn Tree, a place where one needs thick skin.
I hitchhiked from Ubud to Amed in eastern Bali in a little less than five hours and nearly a dozen cars. The most interesting ride might have been with a pair of missionaries from Colorado living in Pakistan who paid all the cash they had, 400,000 rupiah (about $45), at a police checkpoint as a bribe for not having an international drivers license. They didn’t bargain at all. I would have thought that living in Pakistan would make them immune to being fleeced like that.
In Amed I stayed with a CouchSurfing host, a Hungarian divemaster, but after I arrived I learned her plans changed as she had to leave town the next morning. On Couchsurfing you have to be flexible when something like that comes up. I stayed just one night, but the silver lining was this, Pool of the Year: 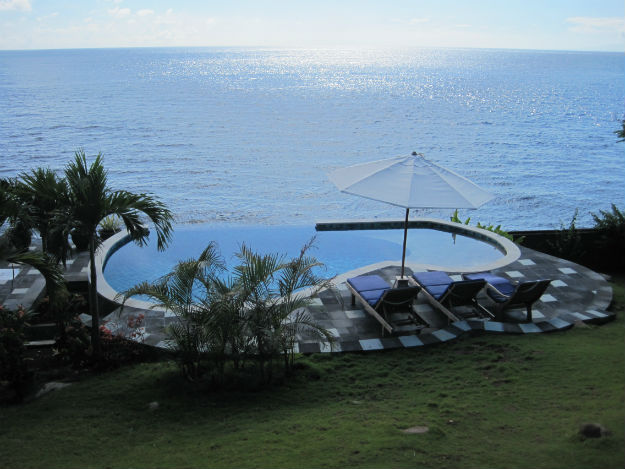 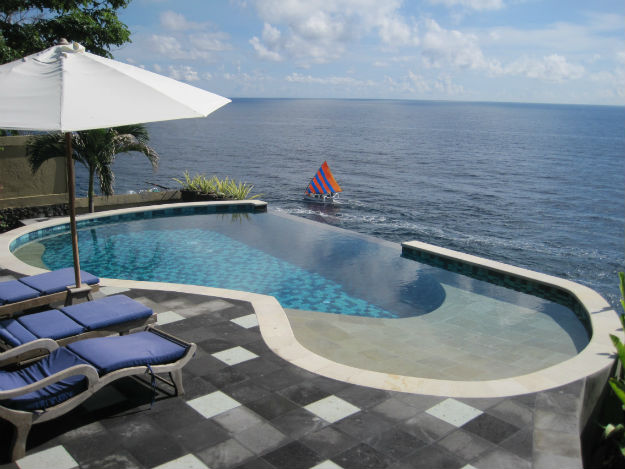 The next day I got a ride back down to Sanur, hitchhiked from the edge of a McDonalds parking lot to the airport, bought a ticket for $59 to go to Makassar, Sulawesi on Lion Air, hitchhiked from outside the airport to get a ride from a Russian divemaster and found myself in Kuta, the belly of the beast.
Kuta.
These days Kuta makes Khao San Road in Bangkok seem like a quiet country lane. Khao San Road is upscale now. Khao San Road has order, and few Thais have it in them to aggressive hustle you. Kuta is the Wild West. My senses are ripe for exploding and I always have a slight feeling of vulnerability. It’s the kind of place where I would lock my backpack to the shower head in the room if I could. Walking back to your hotel late at night through either the drunken hordes or spooky, dark alleys adds to the heightened awareness that I don’t have health insurance—or life insurance. It gives me the skeeves, but I am also fascinated by it.
I only had one night to look around. The monument to the victims in the Bali bombing 10 years ago is now cordoned off to the public for some reason. It should be, there were so many spelling mistakes on the engraving, which made it look slapdash and offensive to their memory.
The best thing about Kuta is that it is like a self-contained island and you don’t have to deal with if you don’t want to, so there’s no excuse for someone to say they took a wrong turn in Denpasar and next thing you know, they were in the arms of an underaged pygmy transvestite. 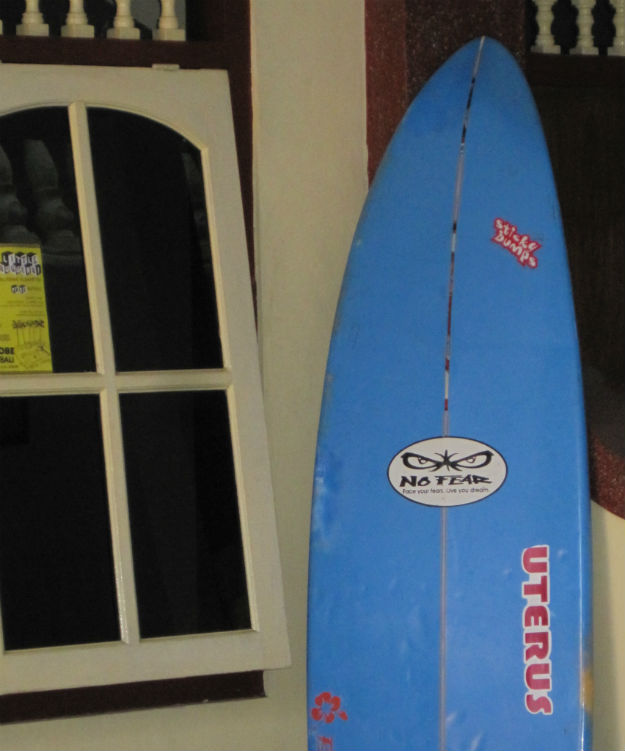 This is your Kuta photo 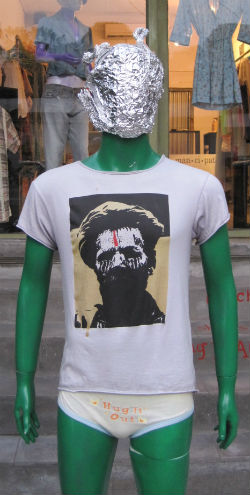 Bali seems to frustrate travelers. So much of Bali is undeniably beautiful and from the surface the culture seems fascinating, but it only whets the appetite to have an authentic, non-touristy Balinese experience, which feels elusive. However, I think you just need to stick around a while and let it find you. So many things are going on and the Balinese are so festival-heavy, if you have the time, you are bound to feel it.
My favorite experience was a zillion years ago in Padang Bai when it was a backwater, on the edge of the village away from any tourists was a beautiful Legong dance in the middle of the street led by two little girls who were incredibly talented and expressive in their movements. Even my last time in Ubud I stayed in a cheap homestay where a woman taught dancing every afternoon to little girls and sometimes the men would gather for a gamalan practice session. I lucked into witnessing it, but I also think staying for an extended time created my luck. 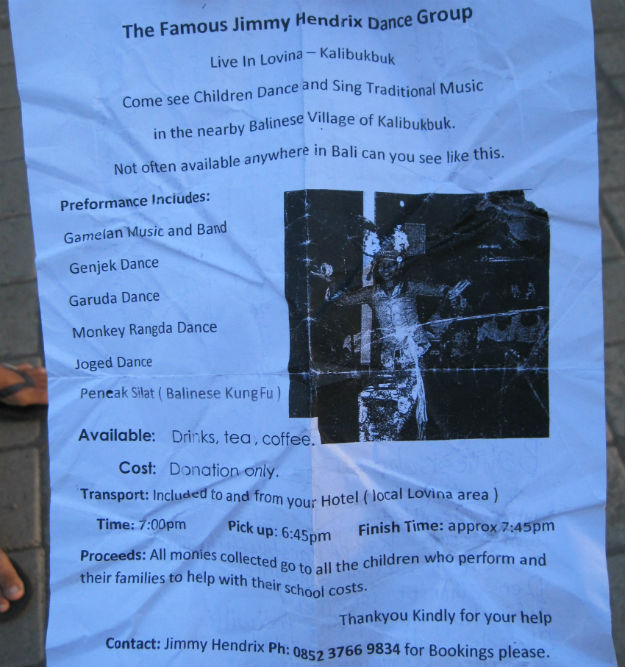 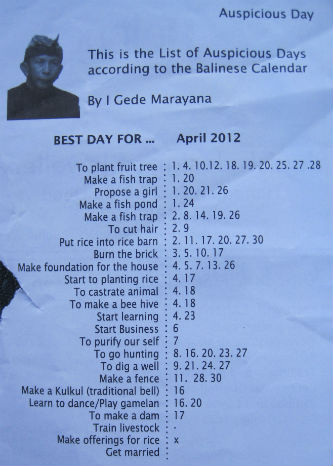 No, THIS is Balinese culture! See how much is going on?