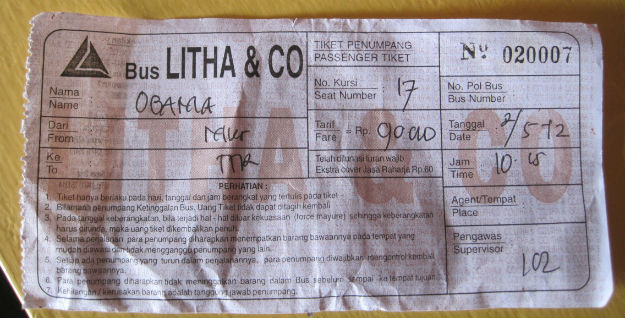 I was proud of myself. I made a bus reservation by phone in Indonesian (degree of difficulty: very high to stratospheric) complete with questions about seat assignment and terminal information. 'Kent' is a hard name for Indonesians to grasp, but 'Obama' is easy in any language.

I liked having a conversation with this man about his cacao beans while he's standing on his cacao beans. He told me they go for 18,000 rupiah a kilo, about $2, but the price fluctuates wildly, unlike coffee beans.

A couple of friends recommended it highly, but I didn’t want to visit Toraja, a region 11 bus hours north of Makassar in Sulawesi. I thought that the main attraction was to visit the natives in their habitat which sounds like they’re zoo animals, not to mention exploitative and probably misleading, like in southern Ethiopia where someone yells, “Tourist!” and the tribespeople hide their iPads, cover their SUVs with brush and pretend to be primitive, posing for photos.
But it’s not like that at all, and three things blew me away about Toraja: the rice terraces, the tongkonan houses, and the funeral ceremony. 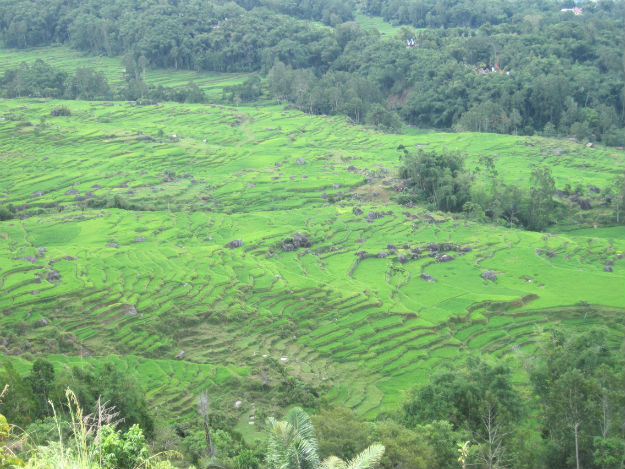 Imagine how much work goes into transforming a mountain into hundreds of level terraces for planting rice. I never ever tire of rice terraces anywhere. They are incredible feats of engineering that my camera can never accurately capture, so this photo is just of a small section. 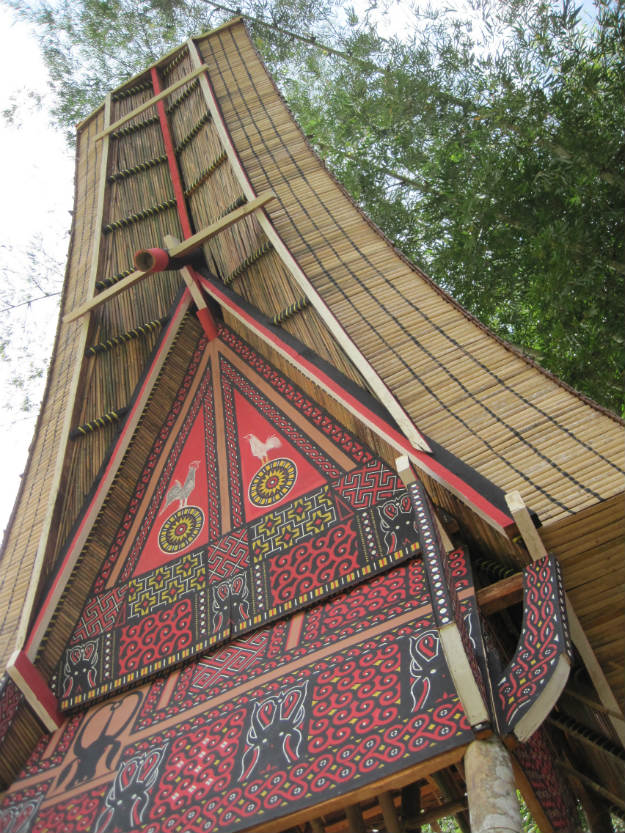 The tongkonan are the distinctive houses with soaring roofs all over the region. Architecture may not seem like a worthwhile reason to visit a place, but I found the tongkonan to be very pretty in their settings just as in Sumatra I was impressed by the elegant Minangkabau-style buildings. 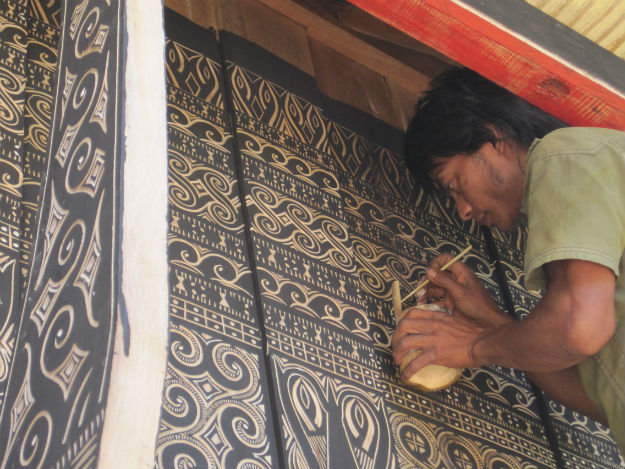 This beautiful elaborate building is for nothing more than storing rice, and you might not be able to see it, but it's richly carved with great detail and painted accordingly. It's 2012. If that isn't proof that they are keeping their traditions alive when they could use their time and hard-earned money other ways, I don't know what is. 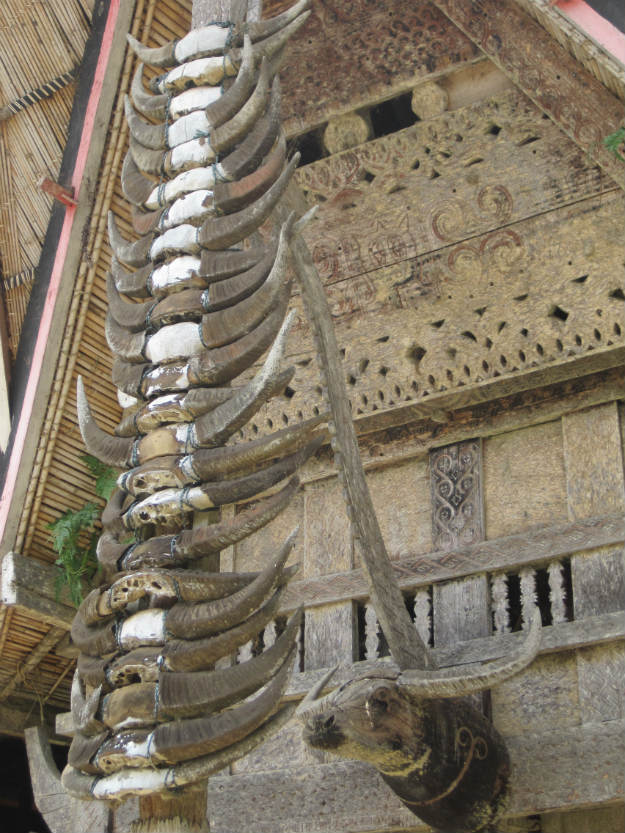 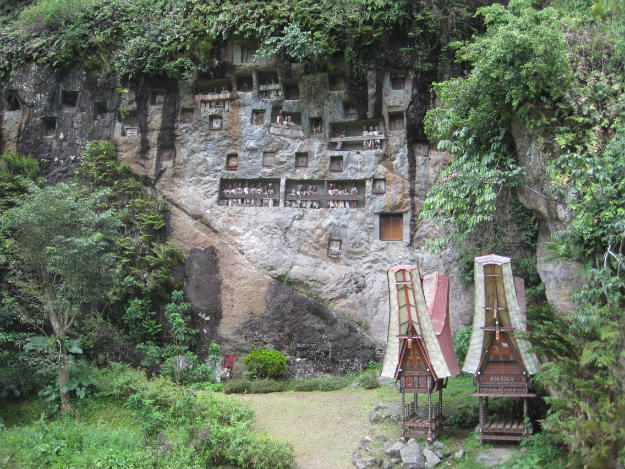 Toraja is an island of Christianity and animism in a sea of Islam in Sulawesi with unique rites. When a Torajan dies they plan an elaborate funeral ceremony that can takes months or years to arrange as money needs to be saved and relatives need time to gather. They usually happen in summer, but a traveler at my guest house saw one the day I arrived. She said a water buffalo was killed, 20-30 tourists were there, an emcee on a microphone would instruct the foreigners on what to do and when—it didn’t sound like my kind of thing. However, I went to the tourist office the next morning and there was a message board with a notice that today was the first day of another funeral nearby, so I rented a scooter (60,000 rupiah a day, about $6.50) and went for it in spite of how odd it feels that the main “attraction” in Toraja is to attend a funeral ceremony and that tourists should be welcome.
I didn’t have dark clothes. The darkest shirt I had said “Amsterdam” on it, which, given the history of the Dutch as colonizer, could be seen as insensitive, like wearing an “I love Ho Chi Minh” shirt to an American veterans parade, but no one minded. I was also told that as a gift men should bring 10 packs of cigarettes and women, 3kg of sugar, but then I heard conflicting information, so I brought sugar. 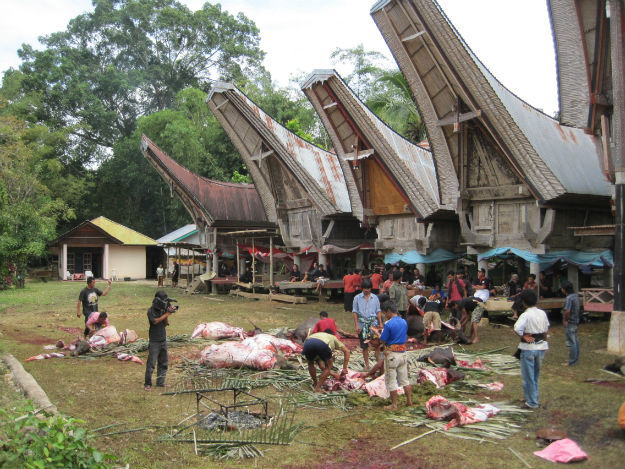 The scene. Blood on the grass in the foreground

Boy playing with hoof as a toy

I arrived late. In a clearing there were eight slaughtered buffaloes among a few pigs. More than 20 were going to be killed this day. To helpfully show what I had missed, someone played gruesome video for me of the first buffalo being slaughtered. It must have been a prosperous family for so many animals to be sacrificed and it only took four months to arrange everything, which is fast.
I watched for over an hour as men were putting on butchery displays, carving the animals up, separating the innards, and giving plastic bags of it to guests. I wish this concept would take off in USA. “Thanks for coming to our funeral! Here is your dripping buffalo spleen and kidney. Go make soup.”
Most surprisingly, I was the only tourist. I played wallflower but a man approached and led me to a viewing area, where I was brought tea and sweets and I presented my gift. He smiled politely. I could tell I made a mistake. I asked if sugar was OK, and he said yes, but he also said I should come tomorrow—and bring cigarettes.
I tried to get an a cappela singalong to The Smiths’ song, “Meat is Murder” going, but couldn’t manage any traction. 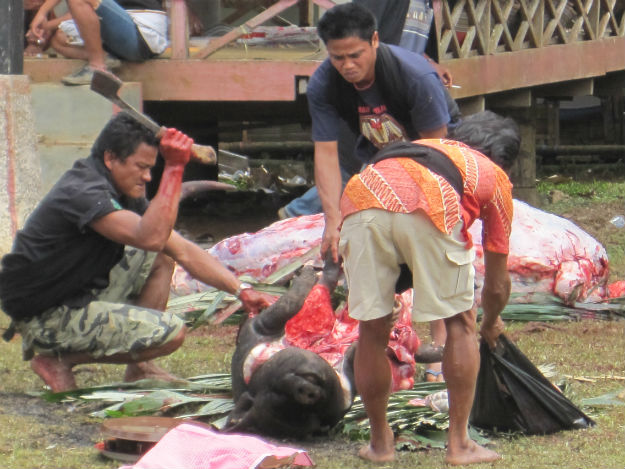 Note the expression on his face and the blood running down his arm. I thought I had lots of good action shots, but they turned out subpar for which I apologize. I blame 81.5% myself and 18.5% on the slow lag time on my Canon.

There was an unexpected festiveness to the event. Many of the dignitaries came by to greet me, pleased and relieved that I could make small talk in Indonesian. Lots of people asked to take photos with me. I almost got out my animal balloons for the kids. If there was a guest book I would have written, “OMG! Loved the funeral! L-U-V! Had a great time, thx! Ta!”

All the pretty girls hang out at the slaughter