I don't know about you, but sometimes I need this reminder. Let me publicly state for the record that I have never tried to squat on a toilet like that. I have fantastic squatting abilities---go ahead, put that on my tombstone---and prefer squat toilets, but the two reasons I don't do it are that I am afraid I will break the seat or worse, I will slip and break my ankle as it wedges into the toilet hole. Imagine the scene as someone has to hack into the bathroom from your screams of pain and look at what they see. They'll wash their eyes for an hour in a vain effort to 'un-see' it.

Simply put, the best thing about Indonesia are the people. It may be an obvious thing to say; can you imagine a country you love where the people make you crazy—other than India? The people are the reason I like the nothing-to-see towns such as Medan, Semarang and Surabaya because just walking around and seeing hundreds of smiling faces is enjoyable. Another point is you can visit Indonesia ten times and see ten very different regions, it’s so diverse. Shamefully, it takes so much time to see each area partly because roads are so bad. Maybe some corrupt government official reading this suddenly feels better about pocketing road works money. “See? If we fixed the roads the tourists won’t need to come back ten times!”
I intended to write 100,000 words about the best and worst of Indonesia, but the reality of time for blogging vs. time for traveling slapped me upside the head. Let’s start with the worst since I don’t want Indonesians to get too big of a head about how great their country is, then have a Jakarta buffer, and end on a warm and fuzzy note with the best. I won’t get around to telling my story about visiting some foreigners in prison in Malang, East Java, years ago and then discovering a book written by one of them years later. Next time.

Chelsea Olivia? Give me a break. Is there a country in Asia that doesn't venerate white skin and faint western features? Dark is beautiful! And what kind of fake name is that? Did her agents google 'most popular American female baby names 1997'? I admit I like the word 'selebriti', but 'spesial'? There already is an Indonesian word for it: 'istimewa'. Am I missing something? 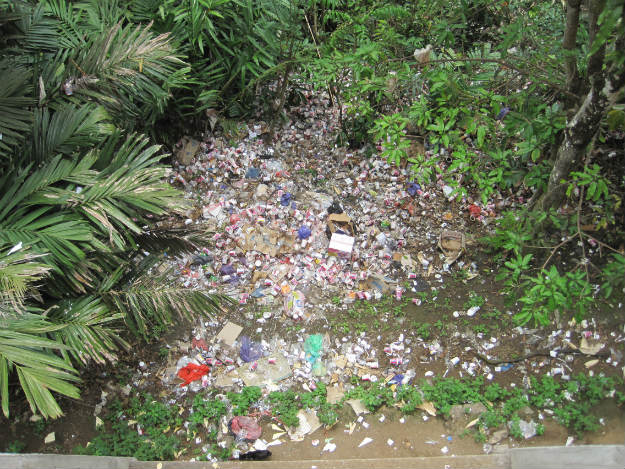 Garbage is a chronic problem. Personal spaces are usually quite clean, but public ones can be horrendous. This is looking straight down from a beautiful restaurant viewpoint. At least I never heard someone say that if it wasn't for litterers, street sweepers would be out of a job.

Jakarta
In Jakarta I strenuously wanted to avoid the skeezy backpacker ghetto on Jalan Jaksa. I detest it with a passion. It is the one and only place where I develop a bad opinion of Indonesians. Luckily, I got a Couchsurfing response to my notification that I was going to be in Jakarta on specific dates. (This is much better than joining a CS Last Minute Couch group. One of my next blog posts is going to be called “Advanced Couchsurfing Tips”. Either that or “Yet Another Boring Hitchhiking Story.”)
A woman and her family invited me. She was incredibly accomplished at the tender age of 24. I am going to say she is the only Club Med dance choreographer who was accepted into Princeton—and then turned Princeton down! She studied Russian in Moscow and the day after I visited she was helping translate for Russian investigators over a plane crash nearby of a jet the Russians wanted to impress Indonesian buyers with. She knew three of the translators that were on board.
I can’t say a lot about Jakarta this time. I didn’t explore much. I went to some flea markets, organized a CouchSurfing meeting, hung out with the CS family, and consoled my host when it was announced that a Lady Gaga concert scheduled for Jakarta had been cancelled due to protests from a small fringe group. Is Lady Gaga such a threat? Metallica was allowed to play in Indonesia, and only a couple thousand people rioted. It’s a shame a vocal few still hold sway in Indonesia. 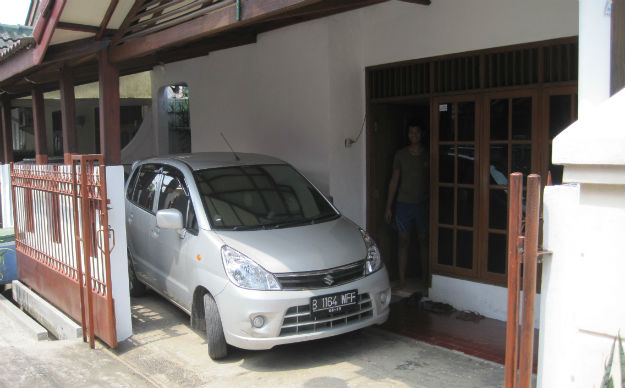 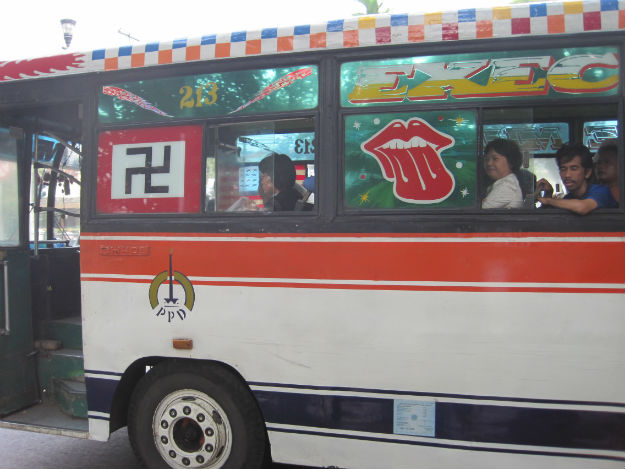 A Jakarta city bus. I don't know where this fits in the best-worst spectrum. 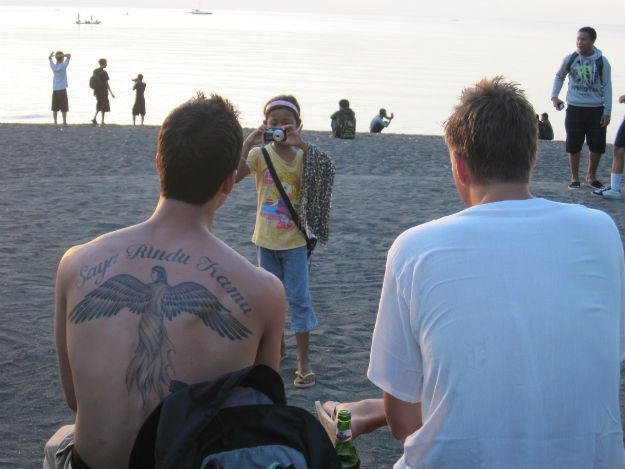 The tattoo says, 'I miss you'. Every girl I show this picture to has a visceral reaction. Might be time to get a 'The Dromomaniac' tattoo across my forehead.

I am blaming the Bank of Indonesia for my morbid obesity. 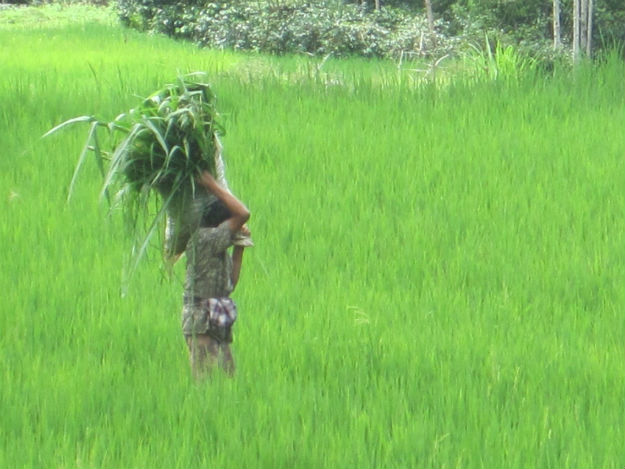 This woman below is holding her rica rica babi, which is spicy pork with lots of ginger and cooked with a big, thick leaf I’ve never seen before. I watched her cook a couple of dishes and asked to take a closer look, hovering over her and trying to follow as she patiently explained the ingredients and her technique.
This is the essence of what makes Indonesia special for me, the fact that I can poke my head into any kitchen, under the hood of a car, in a domino game, anywhere any time of day, and people will gladly let me watch or participate and ask my millions of stupid questions. I’m always curious about how they cook, especially these “dry” dishes that soak in all the flavors, and I could go to any warung (food stall), any wreck of a hole-in-the-wall dive last cleaned during the Sukarno regime and the girl will happily show me what she is crushing in her mortar and pestle. Not once have I been sick in Indonesia.
This open friendliness isn’t exclusive to Indonesia, but the welcoming, warm nature of the people is what stays with me when I remember my time here. Thank you, Indonesia! See you next time! 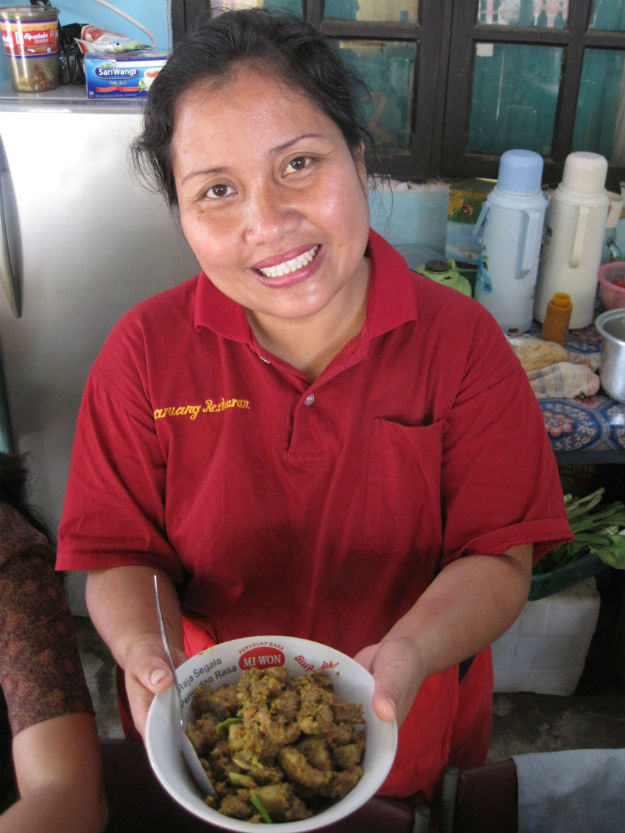 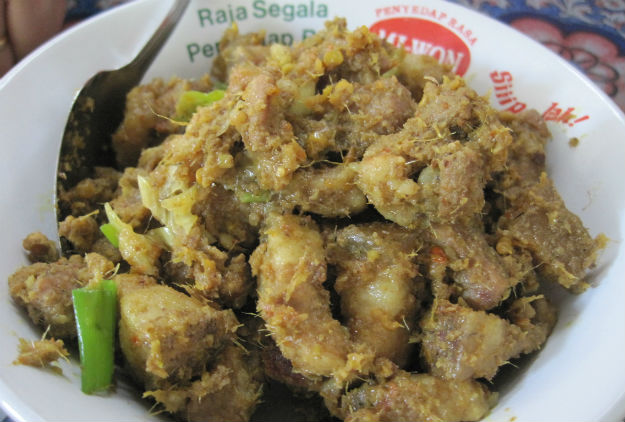 A bowl of rica rica babi 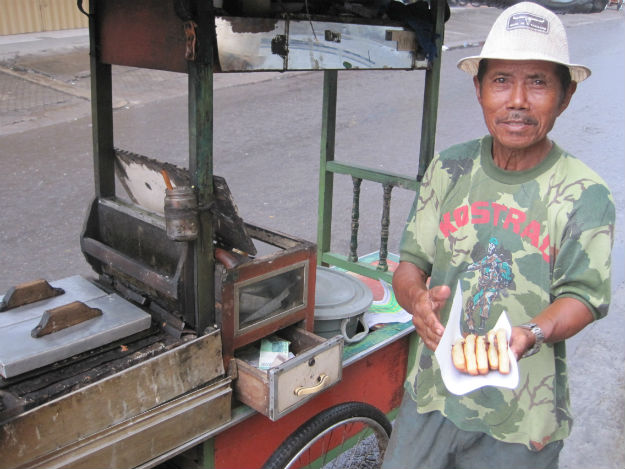 Isn't this guy the best? This photo is my laptop wallpaper now. He is selling buroncong, an addictive combination of rice flour, coconut and sugar, 500 rupiah apiece, about 6 cents. He just happens to be holding five.