Weren’t the Olympics a testament to the greatness of Britain in many ways? I loved it. I’m already a huge Olympics fan, but count me as still on a buzz after these two weeks. I’ve been to London three or four times, the rest of Great Britain once, and the Olympics has made me feel it is insufficient. I’m keen to return to Blighty, something I hadn’t given much thought to previously. Even the opening ceremony, usually a cringe-inducing, overblown spectacle that is hard to pull off, was done very well. What a rich history of music to use for the occasion! Accordingly, the official British background music of this post is “Pulling Mussels (From the Shell)” by Squeeze. 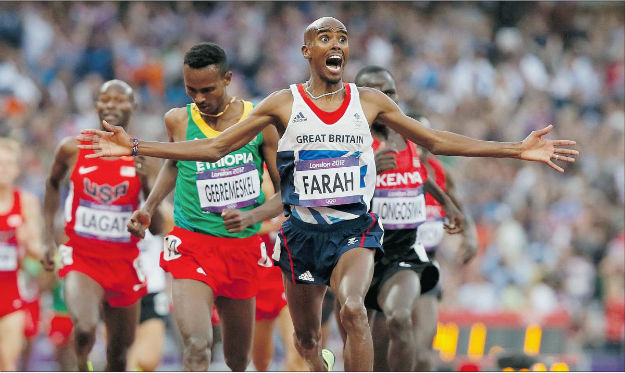 All images in this post have been maliciously stolen from the internet.

The Best: Track and Field, Men’s 5000 meters
Mo Farah! It was hard to top his finish at the men’s 10,000 meters, but the 5000 meters was even better, a classic. His final time wasn’t anything special since the first laps were so slow, but the last 1500 meters (one mile) were run in four minutes. It felt like the runners were in a last-sprint-down-the-stretch for all of those last four laps. In the beginning, the TV announcers had me in a lather when they deftly pumped up the race by mentioning the Ethiopians’ sneaky tactics on the track, but Mo Farah gave an incredible effort to always keep a step ahead when another runner tried to pass to try and take the inside lane. Nice, genuine celebration afterward, too.
A wet-blanket tangent: while watching the Olympics I was struck by how many foreign athletes went to universities in the United States on scholarships. I suppose it is a great advertisement for the high standard of education and the world-class coaches that bring the elite here, but I kept thinking that there must be a lot of American-born athletes that wish they had those scholarships. College tuition costs have risen dramatically lately and I don’t know if giving scholarships to foreign athletes in such numbers is the way to go. End of wet-blanket tangent. 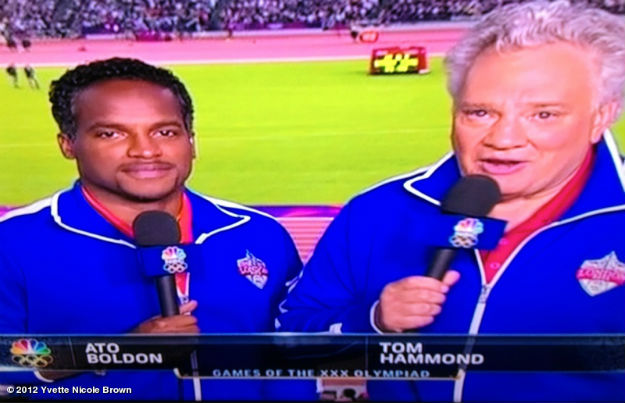 The Funniest: the Tom Hammond and Ato Boldon Announcing Team
Tom Hammond is one of these American commentators who has been announcing his entire life, straight out of the womb (“…and the doctor has cut my umbilical cord…YES! I’m good to go! Let’s watch the replay…”) that everyone knows by voice if not name. Ato Boldon is a former top sprinter brought in to be the expert analyst. NBC has thankfully provided captions to avoid confusion.
What’s funny is that when Ato Boldon speaks, he has Tom Hammond right in his face because he is like one of those guys at parties who stands too close to you, nodding over-attentively. You try not to be rude so you stand on your heels and talk while leaning backwards, except the difference here is that poor Ato Boldon is at the biggest broadcasting event of his young career and is striving to be professional. It was a hoot to see Boldon recoil and try to keep it together while Hammond leans in close, his face inches away, nodding vigorously with a madman’s smile. I felt for him.

The Worst: NBC
No, I can’t let it go. As I wrote in my guide to the second half of the Olympics, how can I enjoy the Olympics with NBC impeding me at every step? All day long I have to stay off a big chunk of the internet lest I hear results, then I have to endure NBC’s jumbled, schedule-less coverage, though if Usain Bolt is running, you can be sure you are staying up late to watch it.
Worst of the worst at NBC was Ryan Seacrest, one of a plethora of hosts where you ask yourself, “Does NBC get a group discount for botox injections?” He was the social media guru and every night he had a little segment where he breathlessly said nothing more than famous athletes were popular on the internet and sometimes they even tweeted to each other. OMG! I blow-torched my eyes to ease the pain until I ran out of propane.
Next time NBC won’t be a problem as Rio de Janeiro is only one time zone ahead of the USA East Coast, but wouldn’t it be better to actually go to Rio? As I tell anyone who asks, Brazil is in the Top 5 of my favorite countries in the world. Resourceful travelers can get there inexpensively and it should be easy to get tickets at far below face value to see sports that Brazilians don’t care about such as field hockey, handball, and (as if anyone does) synchronized swimming. The one and only impediment to having a good time is finding a cheap place to stay. Maybe I will move there and get a place just for readers of The Dromomaniac (i.e. a studio apartment.)
Did you have a favorite moment? For the last time with the BBC voice: have your say. 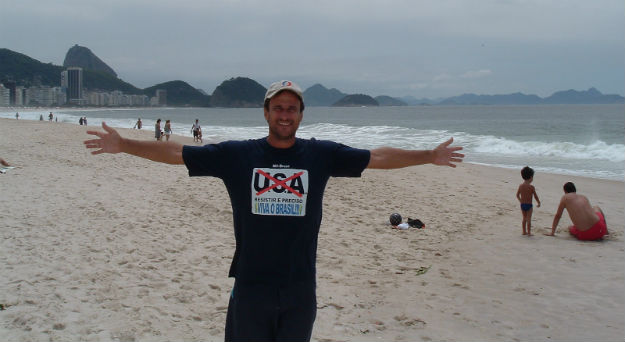 Meet me in Rio!