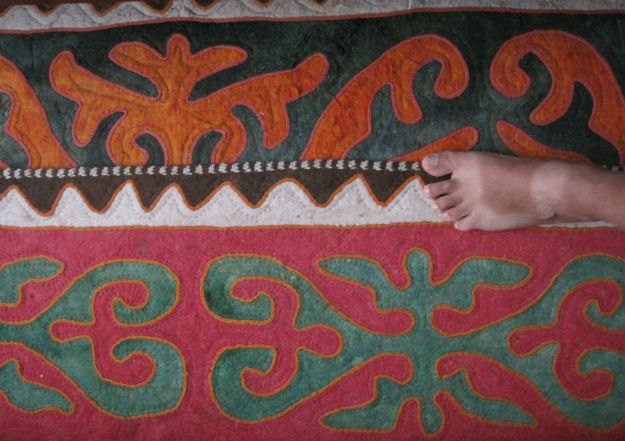 A shyrdak, which is a heavy felt rug, and my foot, which is an appendage heavy with dirt and sun.

I usually don’t like to announce what I will do until I have done it in case I don’t do it, but I need everything to fall in place, so this is the plan: tomorrow I will hitchhike or carjack a ride to Sary Tash, a crossroads settlement near the Chinese and Tajikistan borders. After a freezing evening at 10,000 feet (3000 meters) the next morning I will hitchhike to the border and head to Kashgar, China. There’s a lot of potential roadblocks, but I hope I make it OK. Imagine if I lost my passport between the Kyrgyz and Chinese borders? I guess I would have to settle down and start a family there, so it could be a blessing in disguise.
A very public thank you to Makiko and Stephen with whom I stayed for 11 days total in Bishkek. They are hardcore travelers who have decided to live in Bishkek for a while only because it’s a cool place to be. Inertia kept me at their place for too long, I’m embarrassed to say, but they are solid people I’ve enjoyed my time with. A few nights were passed by playing Brandi Dog, which is apparently a Swiss board game that Stephen has played in many lands . 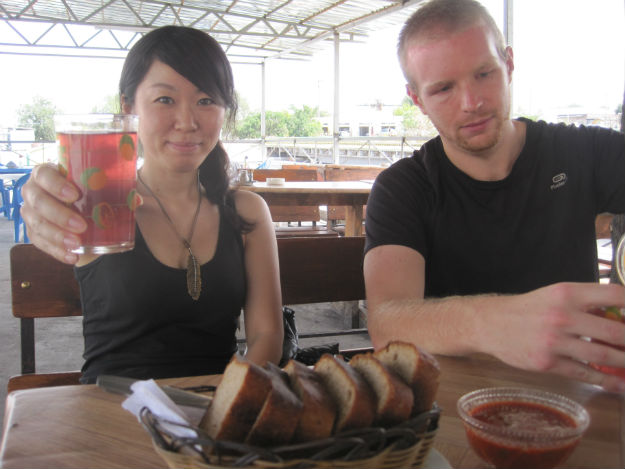 Makiko and Stephen. Makiko is the one on the left offering a glass of kompot. 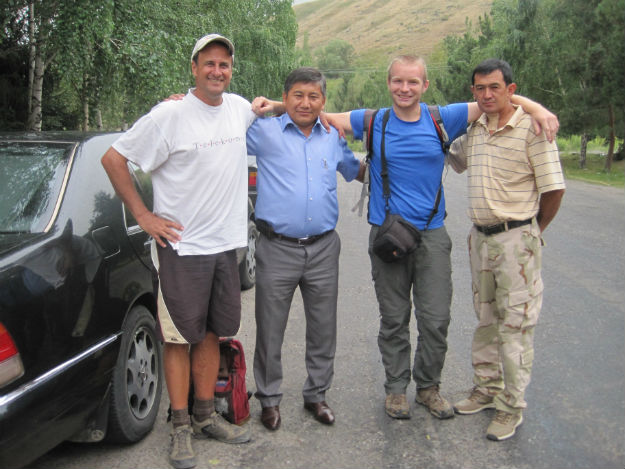 Stephen and I were going to go for a day hike to Ala Archa, but at the entrance it started raining so we decided to head back. As we were waiting for a ride, we happened to meet the dapper director of the park. (Read with sarcasm:) Who knew that being director of a park in Kyrgyzstan can get you such a flashy car?

For all the good times in Bishkek, it wasn’t all honey and roses and bells and dew. I was walking across a street and the driver of a passing car threw his drink at me. I think it was a latte macchiato judging from the quality of the cup, the color of the stain on my shirt, the car and the accuracy of the throw. Tip of the cap to you for your taste, Sir!
I also had the fake cop treatment at Osh Bazaar in Bishkek, where a guy shows an ID and tries to pass himself off as a policeman to shake you down for some money. If I hadn’t already heard about this scam, I might have been worried, but he tugged at me when I had just noticed my arriving bus so I gave him some choice English and left. 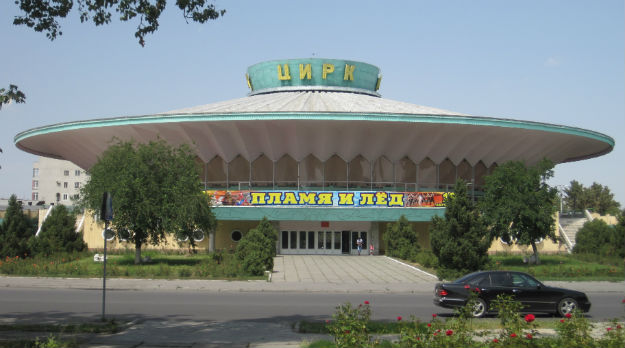 Bishkek circus building. I can’t imagine there are many places in the world where there is a dedicated building for the circus. 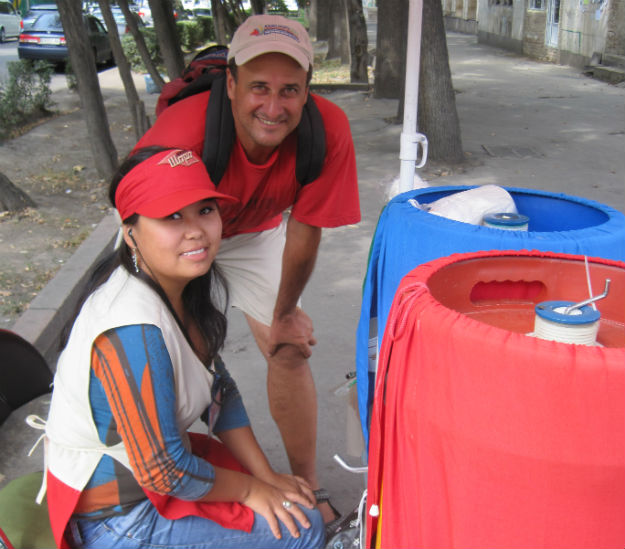 On nearly every corner in Bishkek is a girl selling ice tea or some fermented drink out of these kegs/barrels.

My favorite photo in Kyrgyzstan I didn’t take—there was no time to grab my camera—was from Karakol of a big Mercedes that was driving with a huge roll of carpet in his car, about four meters (15 feet) by one-third meter (1 foot). He (I couldn’t see the driver, but it could only be a “he”) simply slotted the carpet through both rear windows, but there was a meter of carpet sticking out both sides of the car. Of course, he was plowing down the road like nobody’s business, seemingly oblivious to this being a problem. I should have stolen a car to follow him and just to see what happened. 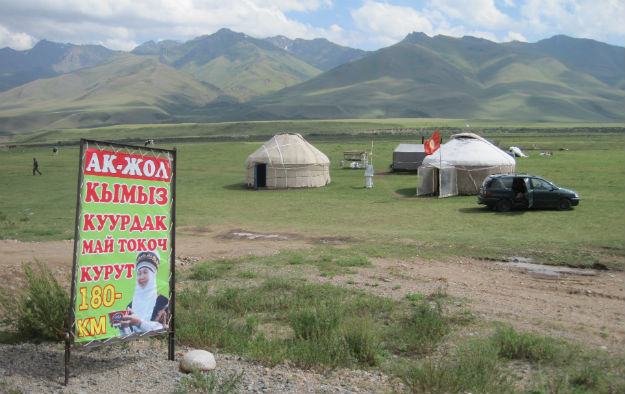 Instead of roadside diners, Kyrgyzstan has roadside yurt diners. This is on the ride to the second city of Osh in southern Kyrgyzstan. The shared taxi ride was incredibly unpleasant for reasons I am trying to forget, but the scenery was absolutely fantastic, some of the best ever. This would rank as a “2” out of what I saw that day. 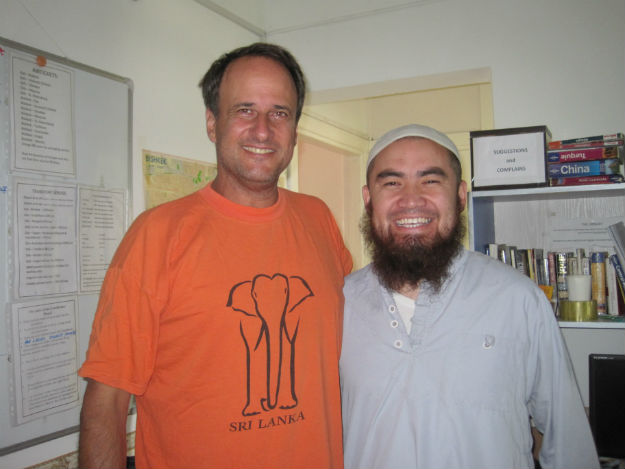 Hanging out at Osh Guest House with one of the staff, Abdul Noor.

I was talking with Abdul Noor as he was getting ready to go out and pray at the nearby mosque. He said, “Can I ask you a question?”
“No, absolutely not. How dare you!” I said. “OK, what is it?”
I was thinking he might like to engage me in a discussion about the impact of Islam in modern society or about American attitudes towards Islam or maybe sensing I was a scholar of ancient civilizations (I get that all the time) what role Islam played in early migrations in Central Asia. Instead, he asked, “I want to buy a watch on eBay, but I can pay you and have you buy it? I can’t use a Kyrgyz credit card.” 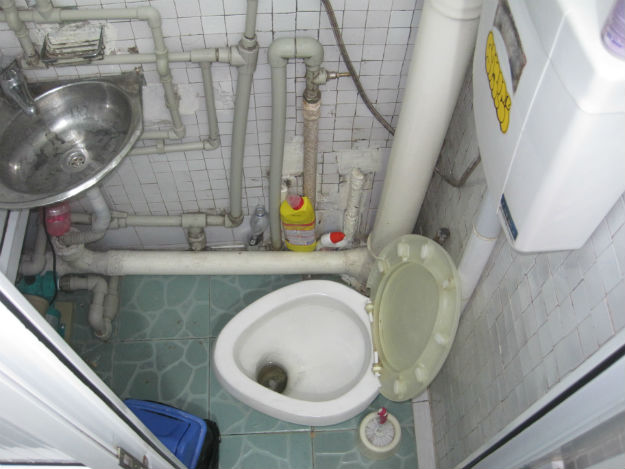 Osh Guest House toilet. All the flash photos wash out the grime. It’s hard to get a representative picture of this place.

For the love of Allah will someone please open a new guest house in Osh? Osh Guest House has been here nine years, but it is a wreck! Keep the same staff, but how about a less run-down, less miserable, less cramped place? It’s unbelievable. At 350 som ($7) for a dorm bed, I am sure another suitable location can be found. It’s incredible that this dive in the hard-to-find, imploding building has lasted so long.
I haven’t slept well in a long while now. The beds here are too short for someone my height. What dwarf decided that footboards on beds were a good idea? Why would anyone need both a headboard and a footboard on a bed unless they wanted that crib feel? China will be different, right?

Practical Information
If you didn’t care about wifi or meeting other travelers and want to be by yourself in Bishkek, stay at the Spartak Stadium Hotel just under the west side stands, 350 som ($7) for a bed in a desolate room you’ll probably have to yourself. First door on the right, then upstairs.