I want to be that one traveler who likes Manila. I can have a great time in many cities travelers despise: Jakarta, Medan, Kolkata, Frankfurt, Lima, etc., but Manila is a test. I had forgotten how overwhelming the poverty is. There are slums and then there are Manila slums. Coming on the highway from Cavite in the south towards Manila you wonder when if it ever ends. Then walking around Malate I couldn’t believe how many women and children slept on the streets. Malate is a super-scuzzy red light area and while nearly every city has it’s seedy, impoverished side, the sheer numbers here surprised me. All the cheap accommodation is in Malate, so it was my base.

A five sentimo coin, worth about a tenth of a US cent. I was told that these are scarce because they are used for washers. A normal washer in a hardware store costs 25 sentimos, and this…

I didn’t know where to stay. No Couchsurfing host wanted me. After my tears dried I got out my list. Someone recommended Lovely Moon Pension. I had Googled it and one of the first results was “Korean found dead at room 318 of the Lovely Moon Pension.” Sounds lovely indeed. I went to check it out anyway. Why not? That happened last year. Do they just throw the cadavers on top of all the others in room 318 now?
The other hotel recommended to me, Casa de Antonio, was also predictably sad. Across the street was a sign advertising “Live goats for sale”. This is in the middle of the city, so why would…I really don’t need to know.
I ended up at a place I knew, a heavily catholic hostel called Pension Natividad. 350 pesos ($8) for a dorm. The last thing I want is to be in a 10-bed dorm room for the last two days of my 263-day trip, but my own room in Chez Dead Korean would have been worse. When I arrived, an old Australian man was bitching to the staff that he should be able to bring his young, scantily-clad, uncomfortably-skinny companion to his room. I sat down to text a friend, and when he stormed off, the girl came over to me and said, unsmiling, “Give me your number.”
Without exaggeration, in the Philippines I get asked an average of five times a day from both men and women if I have a “companion”. When I say no, I get the same look of incomprehension as when they ask my religion. Nearly every Filipino I meet is in disbelief that I’m not squiring around a local girl both for romantic reasons and the notion that doing anything alone is odd. I’m surprised myself, as I seem to be the only male traveler here who isn’t with a girl.
Once I met a group of Filipino girls, one of whom, after ascertaining I wasn’t the marrying type, said, “Kent, find me a husband in America. 50-plus.”
She was in her 20s. I asked, “Why do you want a husband in his 50s?”
“So he will take care of me and my family.”
“Then why not 80-plus?”
“Yes, better. 80-plus, please.”

In line at a supermarket nearby a German man asked me if I had heard about the Aussie traveler who was stabbed. I hadn’t. The German said he was attacked for his laptop. I couldn’t follow the story but I didn’t want to know more because he kept loudly swearing about Filipinos. He leaned over the guy between us and then cut in front of him to continue his embarrassing diatribe next to me. I was half turned away as he droned on about living here for 34 years but always being regarded as an outsider. Thanks for that nugget of info, Einstein. With an attitude like that, I could have saved you 34 years of trouble had you consulted with me earlier. 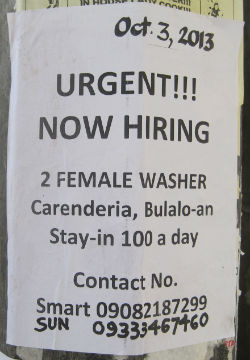 Malate is where many overseas employment agencies have their offices. Is there a country that sends more of their citizens abroad to find work than the Philippines? Hard-working Filipinos are in very high demand, too, as seamen, entertainers (which can mean all kinds of things), maids, nurses, as well as many other industries.
It seems ironic that in a country and religion where family is everything, they are always broken up by the need to go abroad to make money. It’s sad that families are torn apart by this. One of the ping pong kid’s fathers told me his wife has been working in Macau for six years and has yet to visit once; he’s been forced to raise their two teenage daughters himself.
There are many stories of exploitation in the Middle East of the domestic helpers. I hope all Filipinas by now know what they are getting themselves into, but if there are no jobs, and you have three kids, then what are your choices?
I may be overstating the situation. I don’t have a sense—wait, I’m not finished with the sentence yet—of how desperate the poverty is in the countryside. I do know that remittances are a vital part of the economy that lets the government continue being corrupt and inefficient because another country will provide jobs.
Related to this, is the Philippines well-served in having a population of 98 million, the 12th largest in the world? It has the same area as Arizona, which is like putting 30% of the population of USA into Arizona. There seems to be no slowing of growth in sight when abortion is illegal, family planning isn’t common, and the Catholic Church wields so much influence. 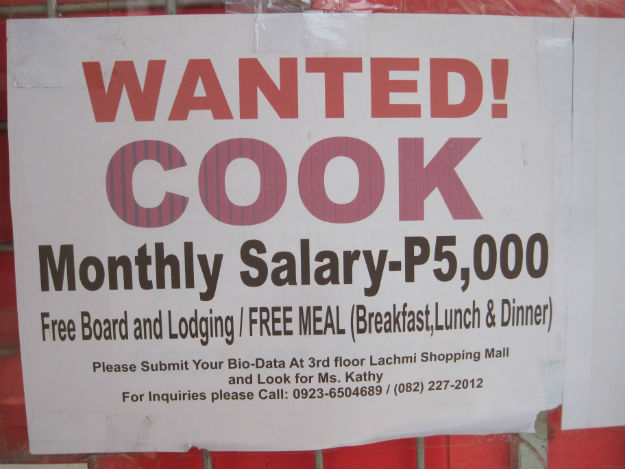 There are tons of jobs in the Philippines. I see help wanted ads all the time. They just pay poorly–but is this really a bad salary considering what’s covered? (43 pesos = $1) 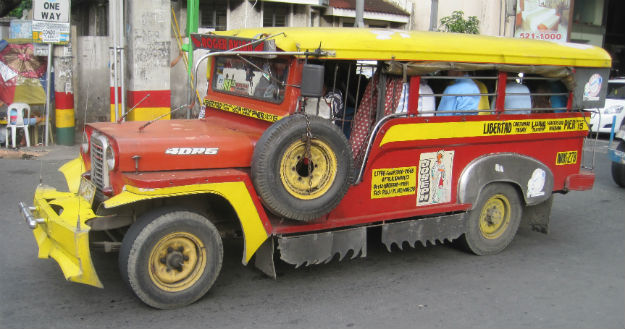 I only love jeepneys aesthetically and with the engines off.

I was going to go on a long screed about jeepneys that no one wants to hear. Jeepneys are colorful, noisy, converted old American jeeps used for public transportation all over the country. People get on them and then cover their faces from all the exhaust fumes. They are great if you don’t have baggage, aren’t taller than 5 feet, don’t mind getting trampled on, and don’t mind not being able to look outside. On the other hand, it is fun to listen to how some people get the driver’s attention to stop: a loud kissing sound I can’t replicate.
The issue with jeepneys is that they are working for themselves, not for you; the drivers are more interested in hustling rides—starting and stopping constantly, driving aggressively, honking their horns—than taking you to your destination. Since jeepneys run on fixed routes, why not have a bus system instead? SO, instead of boring you with all that, my question is simple: why do so many drivers sit to the right of the steering wheel? 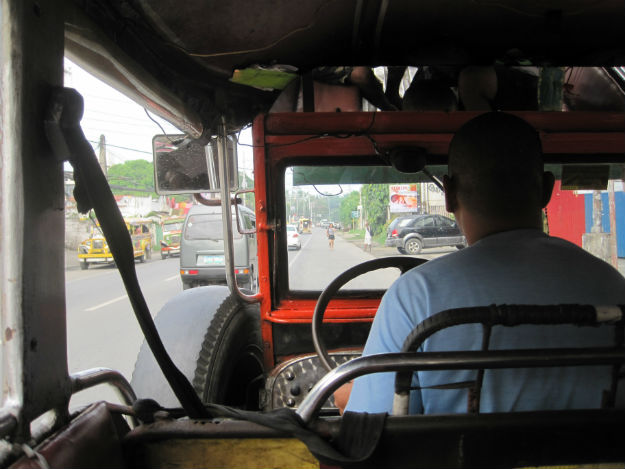 It’s one of life’s greatest mysteries. At least this guy is faced straight ahead. Many of the drivers kind of curl their bodies so they are faced to the left. By the way, one driver in Davao told me that he rents his vehicle for 400 pesos ($9) a day, spends 800 pesos ($18) a day on gas, and his working hours were 7am-9pm. Fares were 8 pesos (18 US cents). 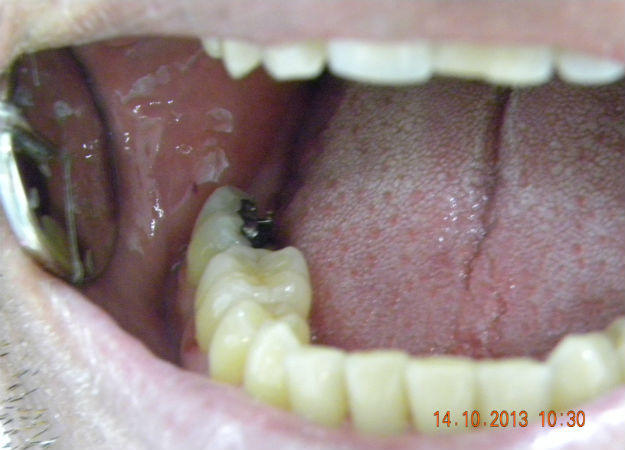 Found some time for a little medical tourism in Makati at Tripon Dental. Got a consultation about the broken tooth for 800 pesos (43 pesos = $1) and then a teeth cleaning for 900 pesos. If I got a porcelain-fused metal crown, it would be 5000 pesos, and a ceramic crown is 20,000 pesos.

Manila’s Makati district, while adjacent, is the flipside of Malate. I didn’t take any photos because it wasn’t exotic to me. I could have been in California. At the Greenbelt shopping center the beautiful people dined al fresco in fifi restaurants, a band played California songs, and familiar brand names were all around me. I wanted to say something clever that I see more Asian faces in San Francisco than in Makati, but it’s not quite true—yet.
In Makati I met with three Couchsurfers, but I couldn’t manage to get them together so I hung out for five hours chatting with them individually. 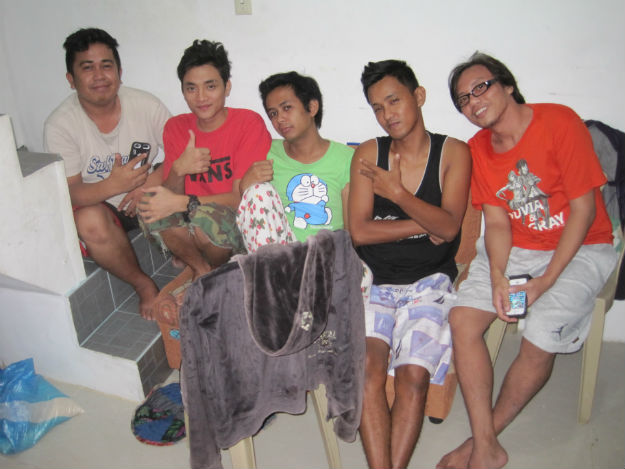 When I first came through town I stayed in the suburb of Cavite with a CouchSurfing host, Jino, on the far left. Pookie, in the middle, told me how to fix the zippers on my backpack. Pookie knows. 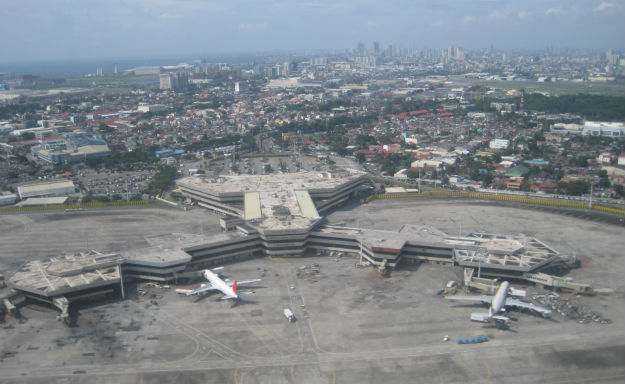 Manila airport: so close to town, so far away because of traffic. 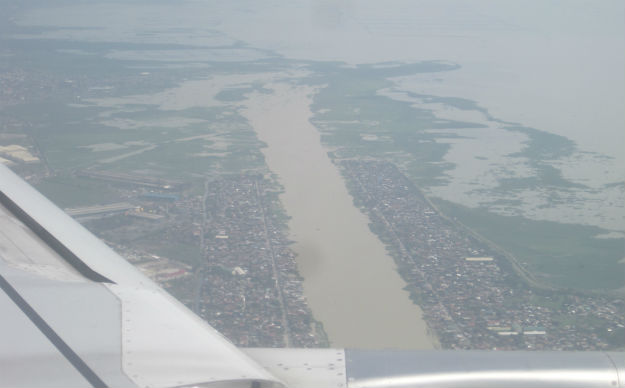 Practical Information
Pension Natividad is a total oasis in Malate. It’s also the only Catholic-run pension I’ve been in that didn’t have paper-thin mattresses.
At departure in almost every airport you have to pay a “terminal fee” that isn’t part of your ticket and goes into an unknown politician’s pockets. The endless corruption stories have made me cynical about such fees.
My next and last Philippines blog post will be about the food here. It won’t be so long, don’t worry.
Why don’t you stay with me? You can follow along with RSS, subscribe to an email feed, see what’s cooking on Facebook, pray that I’ll say something worth remembering on Twitter and if you are really slumming it, there’s always Google+.