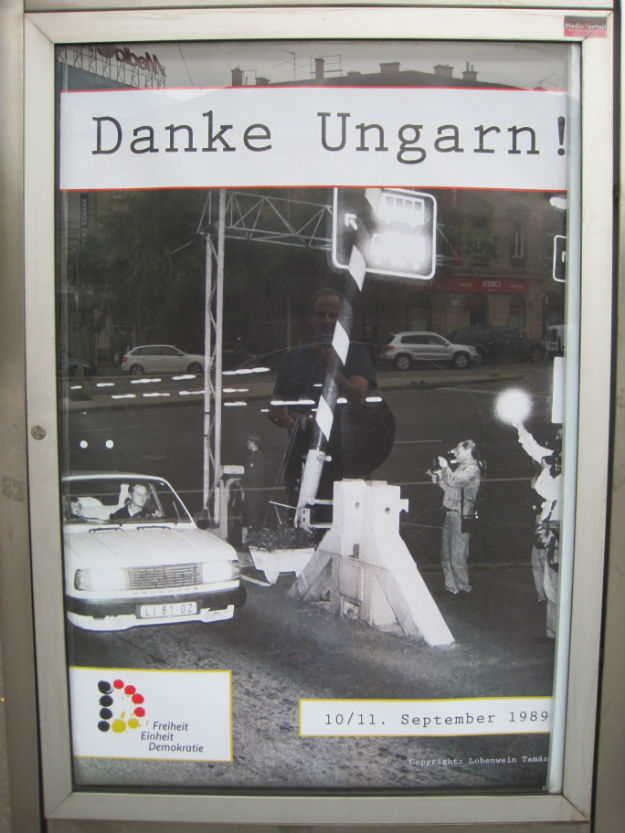 A German poster thanking Hungary for the events of twenty-five years ago. Everyone forgets this now, but the reason the Berlin Wall came down when it did is because Hungary opened the border to allow East Germans into Austria. Traditionally, every summer tons of East Germans came to vacation around Lake Balaton in western Hungary, and in 1989 the Hungarian government allowed them to pass into Austria. They all spontaneously drove to the border crossings and abandoned their cars to get out. Word got back to East Germany, starting an exodus to Austria, and in the drama and madness that followed, it has been lost in history that Hungary provided the first push of the domino.

In Budapest I met up with a Brazilian couple I know who are traveling around eastern Europe. They wanted to know why Hungarians kept asking them why they wanted to come to Hungary. I had a similar experience when I met a German girl on the bus. We were raving about what a great place Hungary is and then when she asked where I was from, she couldn’t understand why a Californian would come here.
What Hungarians don’t get about their own country is that travelers want to experience something different. Brazilians don’t need to party 24/365—Well, OK, Brazilians are a bad example—everyone else doesn’t need to party 24/365. We foreigners want to feel something profound and with more depth than we are accustomed to even if you are slow like me and not able to digest what you are seeing and hearing immediately.
Therefore everything is interesting, even the prosaic. We want to hear about the typically Hungarian, intellectual, complicated drinking games when we come from lands that have only beer pong.
We are impressed when we discover how well they know their country’s history and the feeling that if history wasn’t taught in school, Hungarians would read about it in their free time to become so well-versed.
We like visiting the homes and realizing that any Hungarian worth their salt and with space will have a huge personal library. One friend lamented that she had “only” 800 books, but pointed out that she’d read them all. (Garbagemen and skinhead bookworm photos are here.)
(You have to visit the homes. This is a strong reason why the concept of Couchsurfing is so important and why if you meet someone in Budapest and they invite you to their hometown for the weekend, you don’t hesitate to accept. You also don’t hesitate to accept when a Scandinavian girl asks if you want to see her summer beach holiday photos, but that’s another story. Let’s not get distracted.)
I suspect Russia is very similar to Hungary in a lot of these respects. I’ve only been once, but a meandering summer through Russia has always been on my list. It wouldn’t be fun, necessarily, but it would be worthwhile. 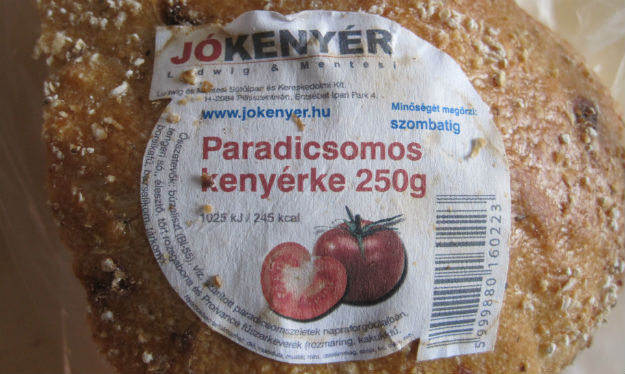 Do other countries paste stickers on their bread to show their use-by date?

Coming to Europe is always eye-opening in how cosmopolitan and progressive-minded everyone seems. All Americans who travel, including me, think we become so enlightened that we must proselytize to get other Americans to travel and experience what we experience. I doubt Europeans think like this. Few Europeans need prodding to travel. (I did meet a young professional Swiss man who was afraid to travel because he didn’t speak any foreign language—other than German, English and French!)
It helps that Europeans don’t have hangups about traveling. They don’t worry about not speaking the local language or where they’ll sleep or what they will experience in the unknown. It’s all an adventure. For most Americans, the outside world is one big scary place, which is nothing if not ironic. Americans should be the last ones worried about personal safety as most American cities have more serious crime than anywhere in Europe. Statistics might not bear me out, but I can’t think of anywhere I’ve been in Europe—or most of the world, really—where I haven’t felt safe. 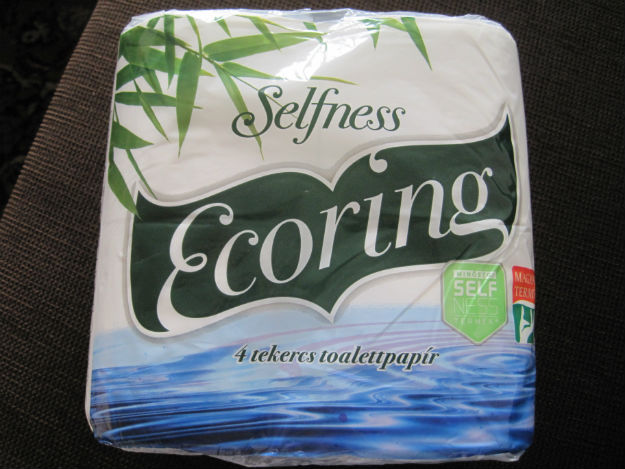 Completely out of context thing about hitchhiking that I will shoehorn in here:
When I was hitchhiking out of Switzerland a couple of weeks ago one of my drivers was about to say something and then stopped himself, asking, “Don’t you get tired of answering the same questions all the time?”
I’ve read on hitchhiking forums that some travelers make up stories about their lives just to get through the boredom of answering the same ten questions from every driver. I never tire of this just as I never take for granted that by merely holding my arm at a ninety degree angle from my body, someone will drive me a distance for free. Answering questions and gabbing are very, very small prices to pay. Besides, I don’t have the memory to run with fake stories about being an astronaut or zookeeper.
In the case of the Swiss driver, I said, “The distance you are driving me right now would have cost me $100 on the train. Talking is the least I can do. What do you want to know?”
End of completely out of context thing about hitchhiking that I shoehorned in here.
A thank you again to Peter Nagy who let me stay exactly 10 days in his apartment with him. That’s a lot of days, especially if you know the old Italian saying, “Fish and guests begin to smell after three days.” Peter probably knows me better than I know myself, so I don’t need to apologize for being an occasional lump.
I worry about being a lump because I visited a lot of friends this summer and I’m not sure I always leave a good impression. Here’s my excuse: I am generally a high energy, go-go traveler. I’m rarely napping or lounging around cafes sipping fruity drinks, so when I visit friends, it is sometimes nice to exhale, decompress and do nothing. I can imagine friends looking at me as my body begins to melt into the form of the couch and think, “So this is The Great Traveler! Over 100 countries, you say?” 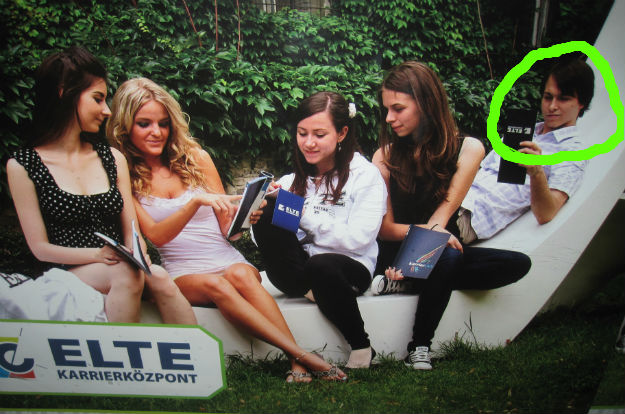 An ad for careers for college students. Call me crazy, but I don’t predict big things from the guy looking at the pamphlet upside down.

Practical Information
I did a little dental tourism and visited Dr. Andras Barsi in Budapest. He confirmed that my German dentist in the Philippines did a great job except for one little high point on the crown that he shaved off. He also scraped off some plaque on my teeth, all of which cost the consultation price of 5500 forints (US$23). I had no appointment.
I have a friend who is a dentist in Romania, too, that lets me sleep in her office. (Photos here.) That’s an experience.
I bought a one-way ticket from Budapest to Kuala Lumpur on Qatar Airways for US$472. Leaving tomorrow. A cheaper option was norwegian.com from Copenhagen to Bangkok if I was in the mood to hitchhike up there. I kept my eye on Malaysia Airlines from Amsterdam to KL, but for some reason it isn’t cheap. 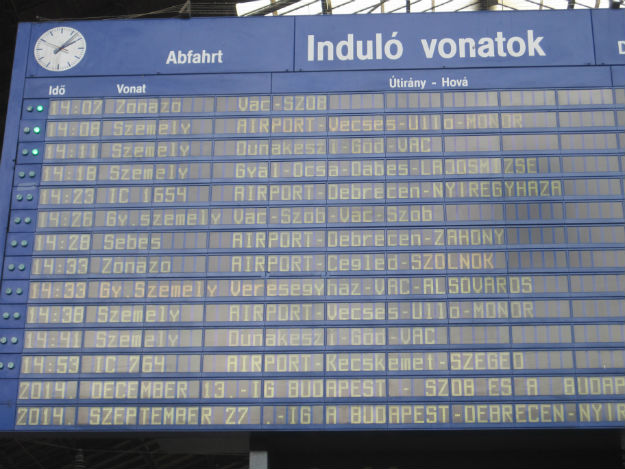 Don’t be fooled by this. There is no train to the airport. This goes to the old airport where you have to take another bus. I don’t know if it is faster to take the metro to Kobanya-Kispest and then bus from there, but it is probably cheaper at 530 forint for a transfer ticket.