I’m proud of my Indian-style head wobble. In fact, it’s safe to say that in the history of mankind no one has every performed it better or been more humble about it. There are different wobbles for various situations. I am not yet at grandmaster status for one of the more advanced wobbles used for saying goodbye to people you just had a positive experience meeting. It’s a vigorous figure eight that should not be tried at home nor without professional supervision, and if done incorrectly you risk mocking the person you are communicating with and whiplash.
I specialize in the most common wobble, the inscrutable, understated one you get when you ask if the bus leaves at 3 o’clock or if the ice in your drink is made from mineral water. I really should teach an online course as it’s too precious to keep it to myself. 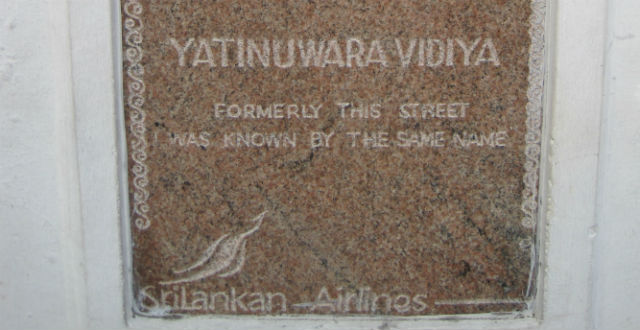 Seen on the street in Kandy: “Formerly this street was known by the same name.” Ta da! Can you imagine the sales pitch? “Listen, we should make a beautiful carved stone plaque to signify that this street has always had the same name.” Did a Sri Lankan Airlines executive say, “Genius! Here’s a blank check?”

I was going to walk to the nine arches bridge along the train tracks but it’s good to know if a train is coming or not. I went to the pretty station in Ella and had this classic exchange with the stationmaster:
“Is the train on time?”
“Yes, on time with 10 minutes delay.”
It was as if I were back in India. Even a Sri Lankan nearby had to laugh.

How great is this? Excellent service tomorrow. Today? Forget about it! The Ella train station is brimming with unintentional humor. 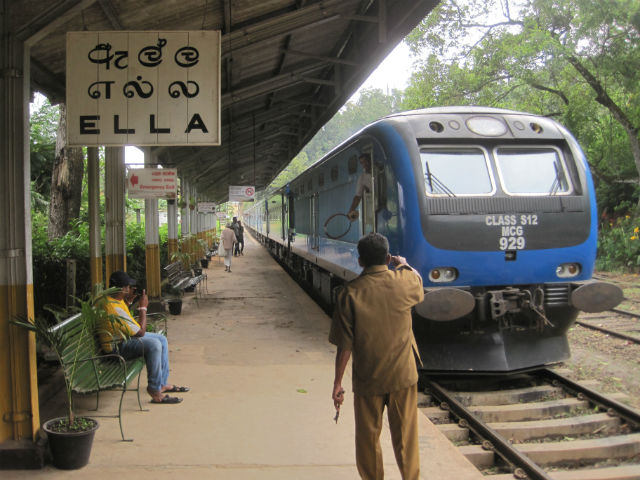 Ella has received awards for having the most beautiful train station in the country, but when you read the comments book they have next to the office, page after page is of people complaining that they don’t inform anyone when the train is late and the stationmaster is uncommunicative. It’s funny to think that the guy is in his own world pruning flowers all day while his station is going to seed.

How am I supposed to get white teeth with yellow toothpaste? Most Sri Lankans have beautiful bright, white smiles, so they must know something. 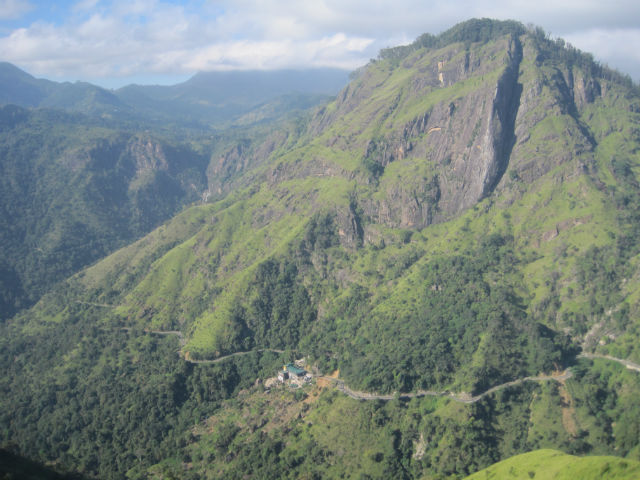 Isn’t this wonderful? It’s Ella Rock as seen from the viewpoint called Little Adam’s Peak, one of the fantastic little hikes through tea plantations in the area. 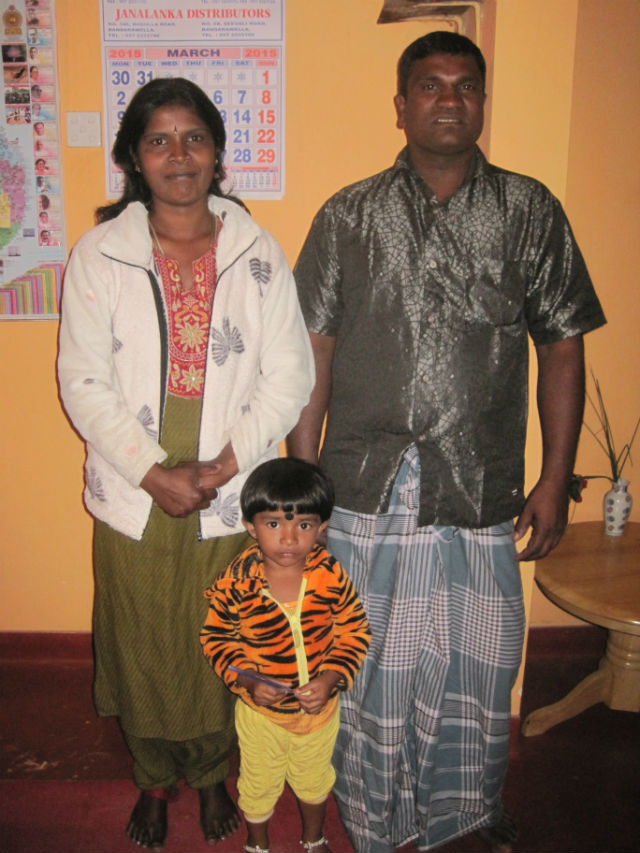 This sweet family is the caretaker at Holiday Homes where I stayed two nights in Ella. I ruthlessly and ferociously bargained down to 1000 rupees (US$7.50) for a room, money that was going to the absent owner, but in return I let the woman overcharge me for laundry since that money was going into her pocket. How do you say, “Scumbag with a heart of gold” in Tamil? 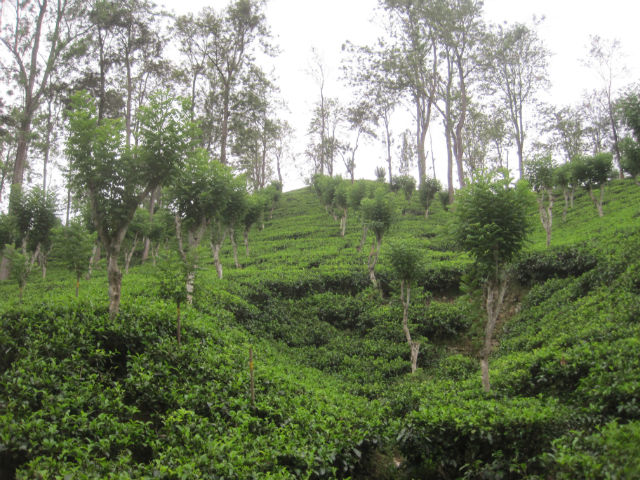 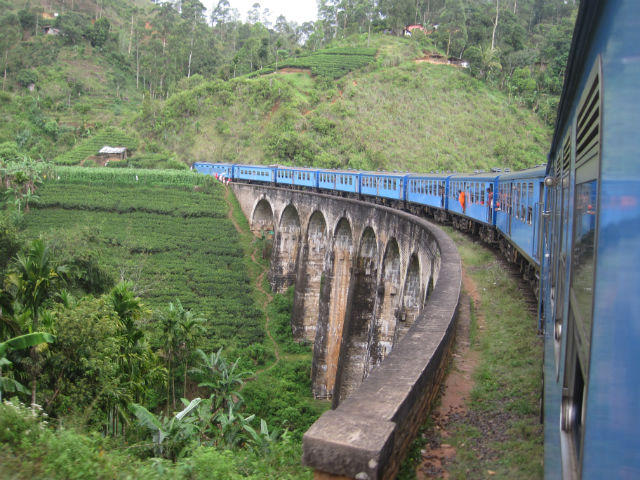 I bought a 20 rupee (US 15 cent) train ticket just to ride it 10 kilometers to Demodara and go over the nine arches bridge. At Demodara it makes a 360 degree turn and goes right under the train station you just disembarked from. I walked and hitchhiked back to Ella. 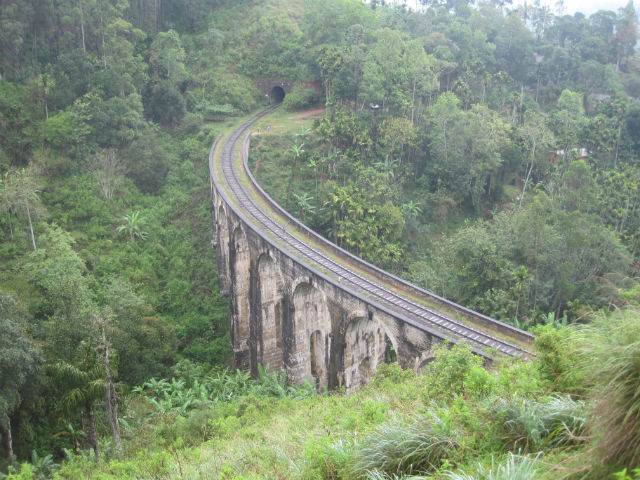 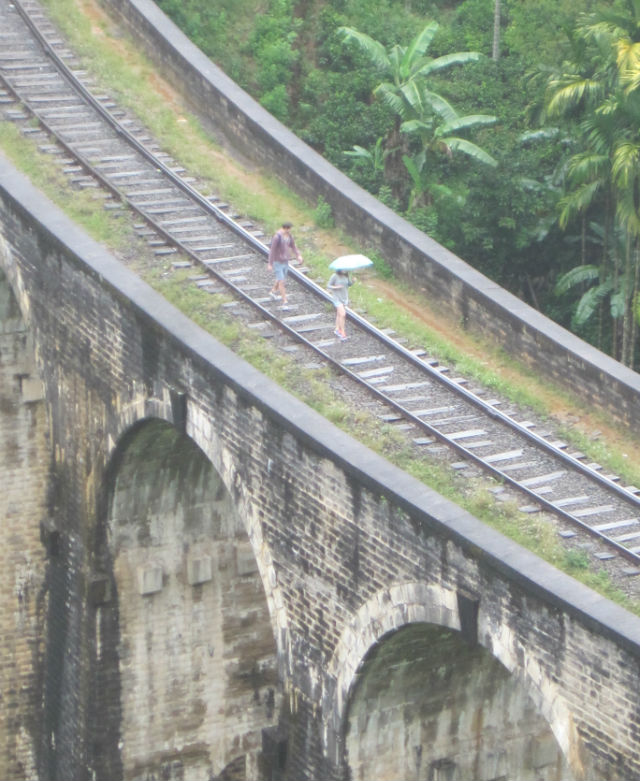 PRACTICAL INFORMATION (US$1 = 131 rupees)
I took the train from Jaffna down to Kurunegala, then took a one-hour bus to Kandy with two tall, blond Dutchmen, a guy with tattoos all over and a girl with enormous dreadlocks. I was sure that if I was naked I would go unnoticed, but I never tested it. Kandy was bursting at the seams with tourists. Accommodation was tight. I started walking north away from the center and found a place less sad and mosquito-infested than the YMCA dorm for 1000 rupees.
I stayed at a second, nicer place in Ella, right in the middle of town for 1500 rupees at Ella Village Inn, but you have to trample through someone’s living room to access your room. If you aren’t in the corner (#3?), it’s awkward.
Ella feels remote and since it is near the end of the line you’d think a train ticket back towards Kandy and Colombo should be nothing to worry about, but reservations on all five trains on a Sunday were fully booked. You can buy unreserved the same day, and tickets somehow miraculously appear or their quota suddenly increases or I don’t know what, but don’t give up hope. Keep hope alive!
(I had a funny experience at the Colombo train station. There is a “Train Tourist Information” office, and when you walk in and show your foreign self, suddenly every train ticket on “full” trains is available. They unfurl a beautiful, large train map of the country that I have never seen anywhere else and they discuss all the places you can go—but only on expensive package tours. When you say you aren’t interested in a tour, they roll up the map as you are staring at it like the red carpet is being pulled away and ignore you like you just passed gas in their office.)
I’m no fan of the food in Ella or anywhere with hardly any local restaurants. A few Sri Lankans told me to eat at Lata, which appears to be a simple, signless general store up from the only supermarket in town, but if you poke your head in there is a tiny restaurant in the back. The food’s too salty.