Hello from California! I have no update other than I am eating as if there is no tomorrow. If I am traveling for ten months, being outside a lot, running around a lot, not having my own space, I can tell you I go into full hermit mode when home. And I eat chips and salsa too much. And I desperately need to redesign my website.
Let’s jump straight to the mailbag:

From Geraldine in Country Unknown:
You are a self proclaimed idiot. Your blog scream of that.
This isn’t starting well.

From “homeless and a hooker in america”(?!):
india over manila..are u on drugs? slums in manila is not that huge and they are harmless and eventually relocated…and then u says makati is not as exotic? u are a very jelous white trash fag..its just that u cant believe that makati and beyond have such an amazing massive skycrapers that im sure your home city have nothing like that…philippines is booming since 5 yrs ago and our economy is 2nd highest in asia after china..so die of envy idiot fag white trash..dont ever come back to manila again..your not welcome here..idiot
Sounds like someone needs a hug.

From Lucy in Kenya:
I am not sure whether I loved or hated your blog.
I’ll seeing that glass as half full! Let’s build on this!

From Silke in Germany:
Hi, I found your blog as I was searching for some Information about the border crossing at Irkeshtam (Kyrgyzstan). I’ll travel from Osh to Kashgar and further on to Islamabad. Your blog is just great, probably the best I’ve read about traveling… and I simply love your point of view towards female solo travelers :). I always knew that I’m awesome 🙂 and finally somebody admits 🙂 just kidding, but honestly please keep on writing!
I can’t find my email to Silke so I can’t remember how I responded, but I have never lost my admiration for solo female travelers. I’m on Reddit‘s travel pages answering questions and giving advice, and so many men AND women are anxious and scared to travel, much less to go alone, and this was before the Paris attacks which is making potential travelers nervous. Silke went to Pakistan on her own and had a fantastic time, she reported to me later, with not one problem. Well done, Silke!

From Robert in Hungary:
Do you drink alcohol at all? It doesn’t come through in your blog entries.
Not really. I don’t like the taste. I might drink a beer if I am in a crowd just to not draw attention to myself, but then everyone yells at me anyway for being unable to finish one bottle. What’s funny is that I will tell someone this and they will nod, but then they will encourage me to try their “special” local beer. To me, it all tastes the same. I certainly have been able to travel for much longer by not spending money on booze—but I miss out in a way, too. 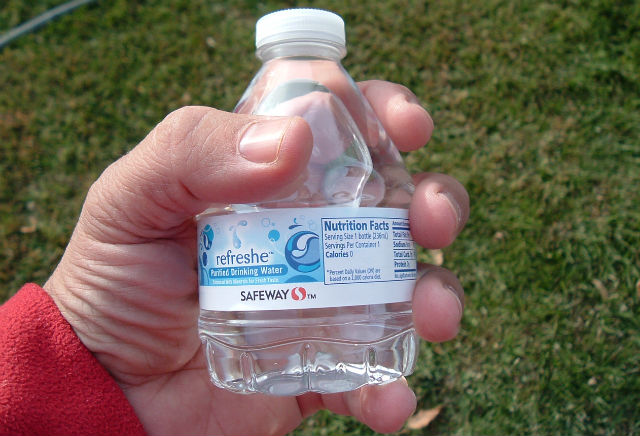 Who says everything is big in America?

From India in England (she says her name is India; who am I to argue?):
My friend made me trudge in the pissing icy rain to find that Hashem place (in Amman, Jordan) because she’d read about it somewhere. I was desperately hungry and kept asking why we couldn’t just go to one of the 450,698,216 falafel or shawarma joints we passed on the way. Only once I was full of Hashem’s hummus and fool did my resentment subside and I admitted it was worth the effort 😀
I don’t give restaurant recommendations willy-nilly, you know. You’re welcome.

From Anya in Australia:
Loved reading your blog. Like you I had been trekking in Nepal (with husband and kids) and had only flown out a couple of days before the earthquake. It’s kind of weird isn’t it, I’ve been reluctant to show off my holiday photos. I guess I should, the Nepalese really need their tourism. We spent a few days at Peaceful Lodge in Langtang Village because the owner was so nice and cooked lovely food. I couldn’t get over that BBC footage, so horrible and sad.
I’m not usually to keen to stereotype nationalities, but I have to share this one. My youngest son ordered a bowl of noodles that he found too spicy. He played with it, dribbled into it and left it. An Israeli trekker (who was watching him) took the left overs and put them in plastic bag to eat later in the day!
Aaaahahaha! That’s a funny story! Thanks for sharing it—although, of course, the guy could have been from anywhere. Of course!

Jimi Hendrix on an official United States stamp! Who says America is a conservative country?

I had another question from Nigel in England. I dutifully answered, and he wrote back:
Thank you for your response. It is impossible for me to convey how happy it was too hear from you. It’s as (if) a fictional character spoke to me from out of a book.
I’m just a regular dude! I have heard from several people who only know me through my website that they are shocked that I would take the time to reply and the idea of meeting me is an inconceivably big deal. I can tell you that everyone gets over it very quickly when they realize I am like everyone else who puts his pants on three legs at a time. I’m no big deal, and I answer 99% of my emails that are written by real people.
So don’t be shy. If you have something to say, get your pen out and write me.
Why don’t you stay with me? You can follow along with RSS, subscribe to an email feed, see what’s cooking on Facebook, pray that I’ll say something worth remembering on Twitter and if you are really slumming it, there’s always Google+. (I’ll follow you back!)