I picked up my new passport today. It is my 6th passport, but it will be hard to say goodbye to number 5. I got it prematurely in Bogota, Colombia, because I wanted to visit Saudi Arabia and the previous passport had evidence that I had been to Israel. (It is always a good idea to get your passport renewed abroad, something the new kentfoster.com will explain later this month, inshallah.)   Then 9/11 happened a few weeks later—I was in Manhattan that morning, another thing I’ll explain someday—and that put the kibosh to my plans. I have yet to make it to Saudi. 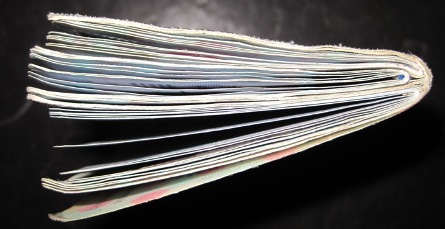 This is good ol' number five. See the three times I had pages added---not all matching, either---and the slapdashed look? I can't tell you the number of times it has led to me being checked and double-checked at immigration. I watch the flummoxed looks it gets and try hard to suppress my laughter.

This is my favorite travel memento of the last nine years I’ve had it.   Every stamp tells a story:   the bribe to get into Panama; the Paraguayan consul official who made me listen to “You Can Do Magic” by 1970’s pop band America on his mobile phone; the Ukrainians who happily stamped me out and then phoned ahead to the Hungarians that a guy with a potentially bogus passport was going to try and enter; the phony documents I had to submit to get the Brazilian visa; the relief at getting stamped out of Morocco with a possibly-contraband police license plate in my bag—good times all around!