HOSTELS
Does everyone know what hostels are about? If you haven’t been in one in a long time, you might be surprised how many big city hostels have been modernized and gone upscale, particularly in Europe. In the USA it’s really a mixed bag. Only some hostels have been upgraded, so it’s understandable if you still have the old connotation of hostels being musty, decrepit and only on a dare would you cook in the kitchen with the scuzzy pots, plates and utensils. Some are still like that. After one night in the Durango, Colorado hostel, I was ready to hang myself.
It is becoming a 50-50 proposition as to whether you need to buy a card for the worldwide chain of international youth hostel federation (IYHF) hostels. It depends where you are going. It also depends on how cheap you can get the membership card. The price can vary quite a bit from country to country. Check each country’s website to see what they charge. If it costs too much, it may not be worth it since there are so many private hostels around. Usually you can stay in an official IYHF hostel without a card, but you pay a bit more. Some countries are strictly members-only. It can also happen that you get stuck at an IYHF hostel that doesn’t issue cards. Be sure you get the right hostel card as some countries sell a national card or some weird thing where you need to affix stickers or stamps. You want the international one that is valid worldwide. 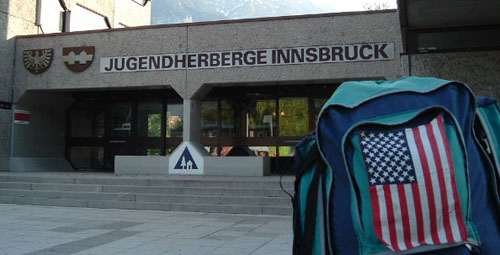 What’s wrong with booking online?
I almost never book any kind of hostel in advance. I might phone ahead and see if there is room, but I like to see what I am getting. I hardly look at photos nor amenities of hostels in their websites. The fabulous facilities, killer location and photos of everyone having the time of their lives–it never looks the same in person.
I know I am completely in the minority with this opinion, but what’s out there? If I was going to Paris in July, I wouldn’t just hope for the best, but Budapest? Cape Town? Rio? There are tons of hostels.
If you prefer more certainty in your life, at least resist booking for more than one night. What if there are bedbugs or the location is sketchy or it’s upstairs from a loud disco when you have been on a bus all day and just want to sleep? Hostel sites now commonly allow you to book without a fee, but I have also seen arguments for refunds when the online price is higher than the walk-in price. (See how this is the anti-commercial website?)
Sometimes it is best not to call ahead as a hostel might tell you it’s full, but if you do show up, a bed could be scrounged up. Some bigger hostels keep emergency beds for this reason. Once I went to a remote hostel in Norway and the manager felt bad for me and let me sleep on a couch for half the price. In effect, I had a room to myself instead of being in a full dormitory. However, the risks of relying on this gambit are obvious. 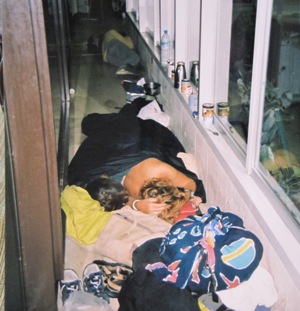 Hey, don't forget sleepinginairports.net. Take the melodramatic comments on the site with a grain of salt. As far as I can remember, I've slept in airports in Paris, Orlando, Frankfurt, Dusseldorf, Muenster-Osnabrueck, Oslo, Dhaka, Bangkok, and Singapore, none a big deal. This photo of some of my peers is from Athens airport. Cozy!

A quick tip for the tallish of height: I am 6′ 1″ (187cm) and when I look at a hostel bed that has a frame where I can’t stick my legs through, I have to analyze it more closely. Since I am as tall as I am wide when I extend my hands, I stand next to the bed and see if I can touch both ends of the bed. If I can, I know it will be very hard to sleep–and I am a horrible sleeper, so these things matter to me. I don’t know why I mention this as anyone tall already knows how to fend for themselves. It must be a solicitation for sympathy from shorter people.

Party Central
Hostels can be a simple place to sleep or they can be a full-on, non-stop rager. Take Loki Hostels, a small chain of hostels in South America.
Usually I’m in total denial about how old I am, but I felt it there. I must have been double everyone’s age, the entire staff included. Every night was like a college party after finals: blasted music, beer spilled everywhere, lots of screaming. It’s like a self-contained island where you hardly need to venture outside, where the country and people become mere background. It was surreal to walk outside and be in La Paz, Bolivia.
Before I start to sound like a judgmental hypocrite, I stayed there to meet people and enjoy myself, too. I didn’t spend my free time in the corner translating ancient Incan texts, if you get my drift. It’s all about balance. Besides, I don’t want to hang out with “my people”, as my goal is to be the oldest and dumbest of all my friends. The bar is set pretty low, I know.