BACKPACK
This is important. Your backpack is your home, your life. Let’s keep it simple and then break it down. Here are the two things you should shoot for if traveling in warm places (and why wouldn’t you be?):
1) When wearing your cold weather clothes, your bag should weigh 10 kg or 20 lbs (10 kg is actually 22 pounds, but I am penalizing you if you are too lazy to learn metric!)
2) Size-wise, your smaller day pack should fit inside your big backpack, so you are in effect carrying only one bag. 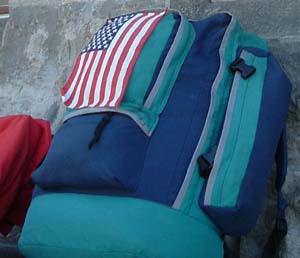 What kind of backpack?
Almost every backpack sold nowadays is a top loader, meaning that you stand it on its end and open it from the top. I prefer the old school kind where you can unzip the whole pack when laid flat. This leaves you more vulnerable when the zipper dies, but I take that risk over always having to practically empty your bag if you need something on the bottom.
Fortunately, there are some clever brands that incorporate both. One is Quechua, a French brand of outdoor gear that enables all Frenchmen abroad to instantly identify each other because they make nice quality, low cost items. In fact, if you are starting your trip where there is a Decathlon store, fly over with a $5 thrift store suitcase and buy all your Quechua gear there. I’m serious.
In California backpacks are often like exercise equipment: used once or twice and then sold for peanuts. I usually find good used backpacks on craigslist.org and in garage sales and you’d be surprised what you can find on eBay.
I am also old school about canvas backpacks, but if you can get a space age material that is also lightweight and won’t shred, go for it. I like a dark color that can hide dirt with an internal frame, no wheels, no handle. Spray waterproof stuff on it or have a lightweight cover for rain/theft. Some people have a mesh wiring apparatus or 15 locks on the zippers, but that’s too much bulk/weight. Even among canvas backpacks, they can be heavy, so shop carefully and let me beat this into your head just one more time: it’s a big difference if your pack weighs three vs five lbs. 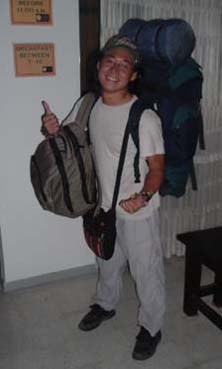 Ben, you know I love you like a brother, but you need to travel lighter. (I told him I was going to out him on my website)

You are the slow wildebeest!
Why do I make a big deal about this? A heavy pack has a heavy hidden economic cost; in other words, the heavier your bag, the shorter your trip. Obviously a heavy bag is hard on the back, but let’s examine some other disadvantages to being bloated:
–Most budget airlines and some major carriers charge to check in bags, sometimes only the second bag, sometimes both the first and second, and now Spirit Airlines charges for first, second and your carry-on if it doesn’t fit below your seat. This could be number three on the list at the top, because if you have a soft backpack that can fit into an airline overhead bin, you’re stoked. There is usually a weight limit for carry-ons, but only once have I seen someone have their carry-on inspected like this.
–Traveling with more junk infers more things of value to fret over and keep track of.
–You become more of a target with your mountain of possessions. You are the slow wildebeest.
–Your choice of guest house/hotel will be more expensive. Will you really lug your stuff down the road to look for something cheaper?
–When hitchhiking (oh yes, you will be hitchhiking )you’re more likely to store stuff in the trunk and not with you in the relative safety of the car.
–You aren’t nimble, can’t hustle with a lot of weight, can’t fit into some public transport, pushing you towards the comfort and expense of taxis. It drives me absolutely crazy every time I hear this phrase from backpackers carrying too much weight: “I can’t be bothered (to put forth any effort and carry my bag)”. It’s throwing up the white flag, letting your possessions control you. Your luggage becomes a literal ball and chain. You’re more inclined to take a taxi than walk 500 meters. Most travelers aren’t walking 5 meters with heavy bags. 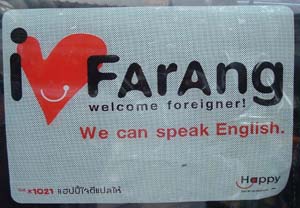 I don't feel the love

A quick tangent about taxis: whenever I hear a story about a travel disaster, usually it starts with the words, “I took a taxi…” Often trouble starts with taxi drivers, especially from airports (and seemingly every sad Thai story involves tuk-tuks). You very rarely need taxis. Most countries have great public transit systems. If it is after hours and you have been drinking, taxis might be your only choice, but then you are also at your most vulnerable.
To sum up: all travel decisions become clouded with the subconscious influence of your heavy bags. (Did that sound deep? Good.)

Will the post office save you?
Lots of people think that it’s OK to bring too much since they can always mail the extra stuff home. I see the aftermath of this when they stagger out dazed from the post office, stunned by the sticker shock of how high postal rates are. These days there are few countries where it is both cheap and reliable at the same time to mail stuff home.
As examples of your dearth of options, the only semi-reasonable postal rates in South America are in Paraguay, but tragically, few people pass through; in Asia, Malaysia (I do have a trick to mail stuff crazy cheap from India, but until I get a million followers on Twitter, I won’t disclose it.); for Europe, nowhere I know. It’s a black hole. Part of the reason is that sea mail (aka surface mail) basically no longer exists; if it is called that, it really just means that it will sit in a back room at the post office until they feel like sending it. 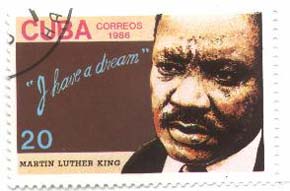 Often post offices steer you towards parcel rates and their own pre-cut big boxes, but ask about “small packet” rates with padded envelopes as they can be cheaper and have as high as a 2kg limit.
Most countries have websites for their postal rates, though perhaps not in English. If you can’t figure it out, ask others on the Lonely Planet Thorn Tree for their experiences regarding reliability and costs.
Like bargaining too hard for a haircut, it can be fraught with peril to mail a package at the post office from a developing country. Sometimes you pay and they set aside your package, saying they are busy and will apply the stamps later, but it has happened to me that you pay for air mail, they send it sea mail, and they pocket the difference. (At least it eventually arrives.) If you insist on them applying the stamps under your watchful gaze, you risk antagonizing them as you are calling them out. Stay positive and upbeat.
If sending stuff from a heavily religious country, utilize this great idea I read from another traveler: in Latin America she addressed everything to her friends and family as going to “Sister” Janet Smith and “Father” Thomas Jones–even though they have nothing to do with the church. She surmised that she had better chances of things getting home that way (“And my father really is Thomas Jones!” she said.)