In case you missed the last blog post, the government of Kyrgyzstan gave me a press pass for the Second World Nomad Games, a sort of Nomad Olympics for countries near and far from Central Asia. I’ve never done anything on a press pass before. The primary benefit of it is simple: access, access, access. (They did pay for my food and lodging; I will go into the details next time.)
Let’s start with what the government wants you to know about circumcision:

This is from page 92 of the informational booklet distributed to the press. Now I see what I have been missing from being a member of the press all this time! A hidden world has opened up! I’d like to see information booklets across the world jazzed up this way. Good on ya, Kyrgyzstan.

In more practical terms, having a press pass allowed me on the side of the field for all kok boru matches, kok boru being the national sport of Kyrgyzstan and the feature event of the games. Wikipedia starts by saying it is the national sport of Afghanistan and shows its more common name, buzkashi, but Kyrgyzstan thrashed Afghanistan in the semi-finals and should seem to garner more respect, but maybe if the game was played in Afghanistan with Afghan horses, the result would be different.
I call it headless goat/sheep carcass polo, as the object is to take said animal and toss it into a pit. Here is a breakaway kok boru goal (in case you can’t see the video below):

A good chunk of the sport is simply trying to pick up a 33kg (72lb) goat carcass off the ground while on horseback, and rarely do you have an open shot at picking the goat up. The other team is trying to prevent you from doing it, and it’s easy to imagine—because it’s hard to see what is going on in the scrum—that as you are bending down, a horse is coming right at your head. In the final that happened to a Kazakh and he was taken on a stretcher to the hospital.
When you do have a handle on the goat, the other team is trying to wrestle it away from you. Check out this mess:

Each match required a freshly slaughtered goat or sheep, so a pen was kept out back. The head and hooves were cut off, and I guess much of the body is drained of blood because I never noticed it. They used a goat in the semi-final but a sheep in the final for some reason. 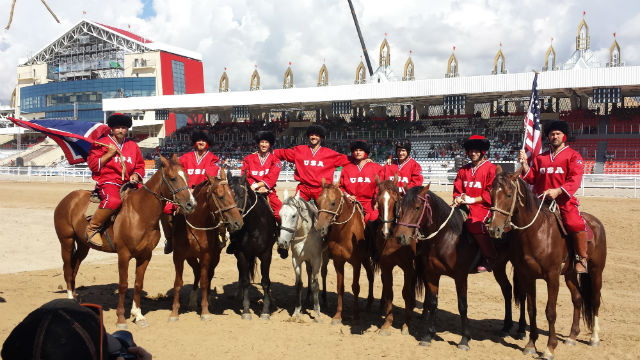 Team USA only became Team USA about two weeks before the competition. Someone at the American embassy or whomever thought it would be a good idea to compete. Someone knew someone who knew Creed Garnick, an actor who is also a horseman, and he called his friends across the country who were good on horses to come out. None of them had heard of kok boru or had much experience at picking things off the ground while on a horse—American saddles aren’t made for that, it was explained to me—but to their credit they were game and hopped on planes to get here. 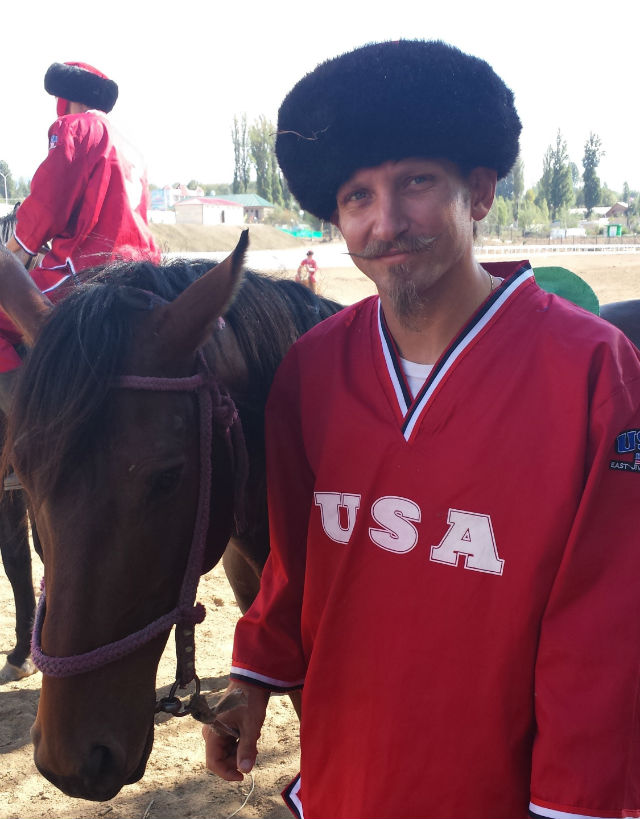 One of the guys from Team USA, Scott Zimmerman.

I arrived early for Team USA’s match against Kazakhstan and we were all surprised to find that they switched the starting time to two hours later, so I had a chance to hang out with them and see their reactions watching Russia vs. China. (In “Russia vs. China” don’t expect to find anyone named Boris or Wang. They are all ethnic cousins of the Kyrgyz—read: no white Russians or Han Chinese. Besides, they couldn’t find any Chinese who could hold a goat and text at the same time—rimshot!) They were an affable, seemingly ego-less bunch, thrilled to be there. 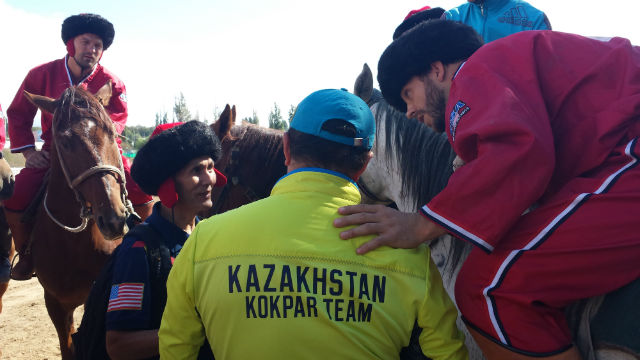 Before the last preliminary match the coach of the powerful Kazakhstan team came over to tell the Americans through their interpreter that this was going to be a friendly match. This was wise. He could see that the Americans were unskilled at the game but were full-on gung ho and probably good horsemen, and he didn’t want his own players hurt, I’m guessing.
The guys knew what they were up against. One team member described it as bringing a Kyrgyz guy to America to play football for the first time and he has to go against the Denver Broncos. It’s an apt comparison. 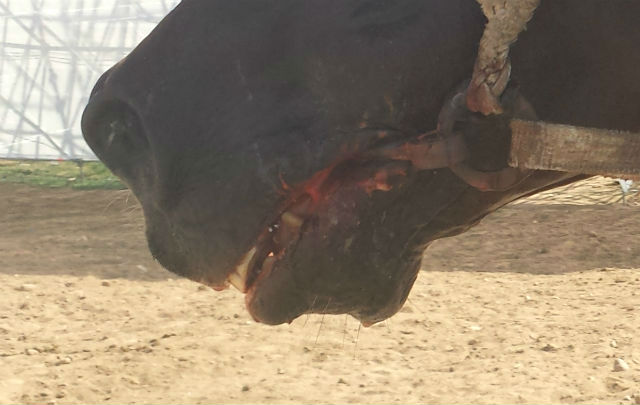 The US team was keen to continue training for the sport back home, which they likened to rugby on horses, to return for the next Games in 2018. It’s hard to imagine kok boru taking off in America, though; the whole thing is a PETA nightmare. Someone mused that maybe wild mustangs could be trained specifically for this, but it’s rough on the horses in any case, not to mention the issue of throwing around headless animals. Before the match I asked one of the guys, “How’s the condition of the horses?” and he shook his head in amazement at what they go through, saying, “No comment.”
This picture is from late in the Kyrgyzstan vs. Kazakhstan final of a horse bleeding from its mouth. Is the way you look at this purely a cultural difference? I would bet that any Kyrgyz or any other participant would say they loved their horses deeply, that the horse is a symbol of their nomadic existence, and they don’t see it as mistreatment. 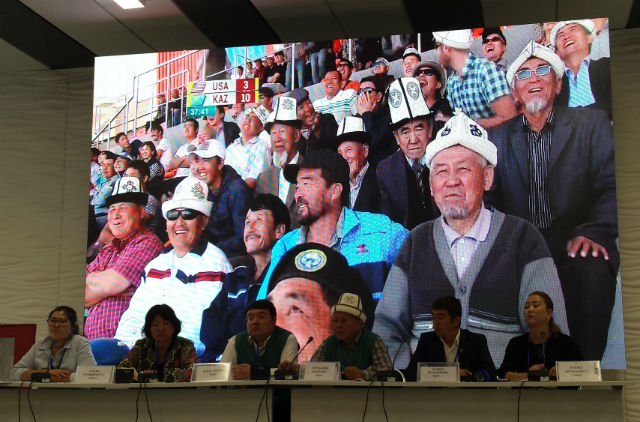 It was surreal to be at a monotonous press conference in the afternoon while they showed the frantic USA-Kazakhstan kok boru match in the background. Here the crowd is being amused by the Americans. I like the faces. Kazakhstan beat USA effortlessly, and then Kyrgyzstan beat Kazakhstan handily in the final. 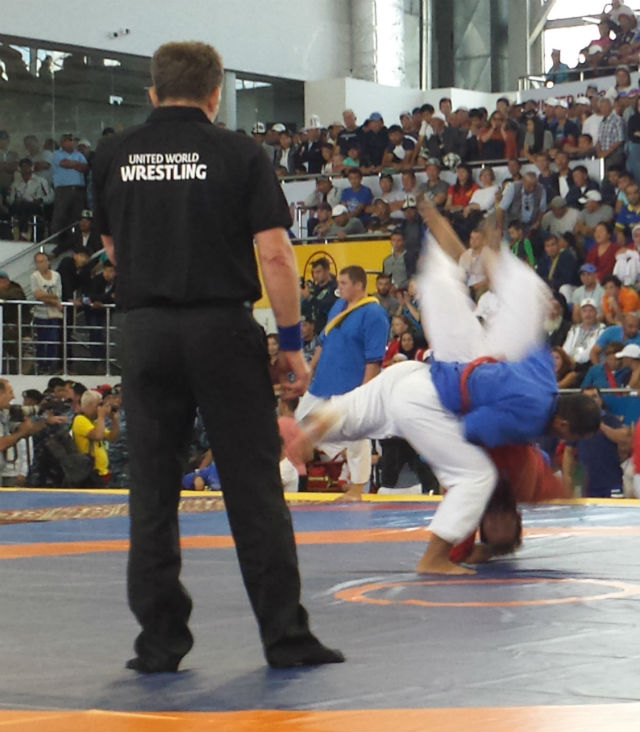 There were also a myriad of wrestling events next door to the hippodrome. This would have been my first Pulitzer if I had a decent camera.

This is called mas-wrestling, a newly-exposed sport to me. (That wasn’t a circumcision joke.) The premise is simple: try and pull the stick away from the other person. A short video: 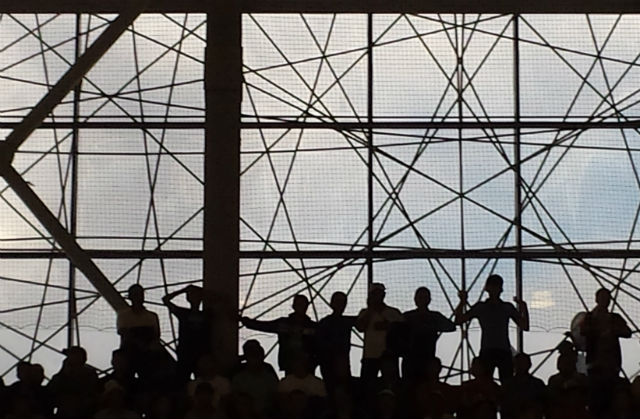 A silhouette of spectators along the top row of the packed wrestling arena. 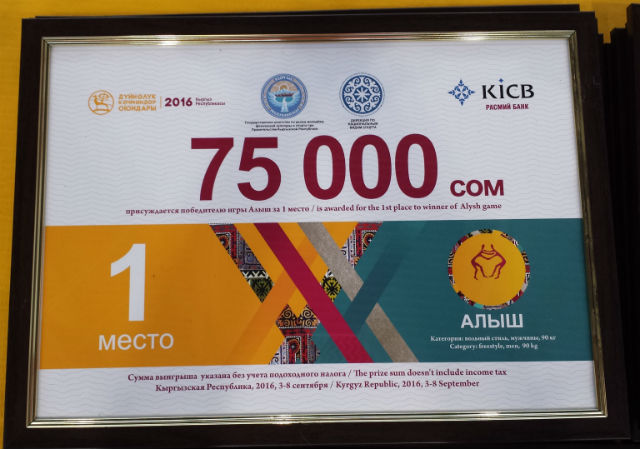 This is given to the first place winner in one of the wrestling categories, but notice the fine print, that it doesn’t include income tax. 75,000 som is about $1100. I wonder how much they take home.

PRACTICAL INFORMATION:
My practical information suggestion is to try and get a press pass. If they give one to me, they might give one to anyone. Many events have a website where there they explain how media can get accredited.
In such a case, try to have more than a phone camera. Often I had officials look at my phone, look at me, look at my phone…if I had a legitimate camera, I could get away with more. In their eyes a smartphone is hardly better than a disposable camera. I thought of bringing a shell of a nice camera just to throw them off my scent.
The next World Nomad Games blog post will be a barnburner. Even with my crappy non-camera I have some killer pix. 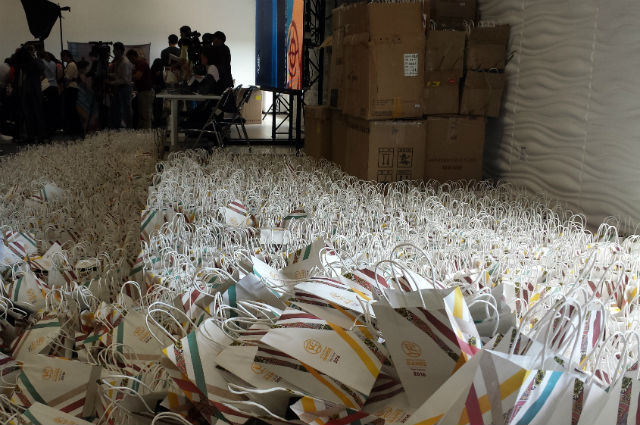 At the press center they made all the volunteers work on these zillion fake gift bags, and then they hand you a real bag that has a key chain. Pretty cool for me, pretty mind-numbing for the volunteers.