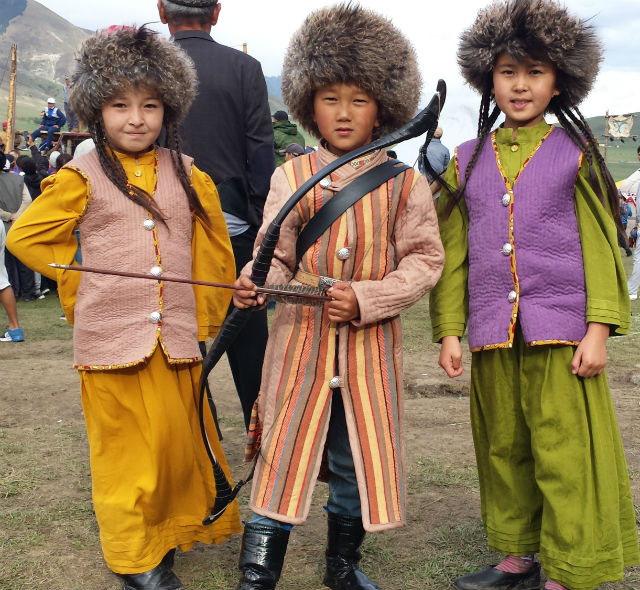 I was thrilled to come across these kids and take this photo, but no one else could pass them without wanting a photo either, and they were dead tired of posing by the end of the day.

No one, absolutely no one, has uttered a bad word about the Second World Nomad Games, an all-time event. I hemmed and hawed about coming because I had been to Kyrgyzstan before, and for visa reasons land-locked Kyrgyzstan is like an island, not on the way to anywhere else. In the end I was enticed by the photos of my friend, Stephen, from the last Games two years ago and I managed to procure an all-access press pass, so I went for it. I had nothing else to do anyway.
I purposely didn’t do much research before I came, preferring to have it unfold around me. I became a big fan of the unexpected circus sideshow stuff. This was my favorite four seconds. I love how Sledgehammer Man grabs all the glory while the poor guy on the ground must be thinking, “Hey, wait a minute!” (Video here if you can’t see below): 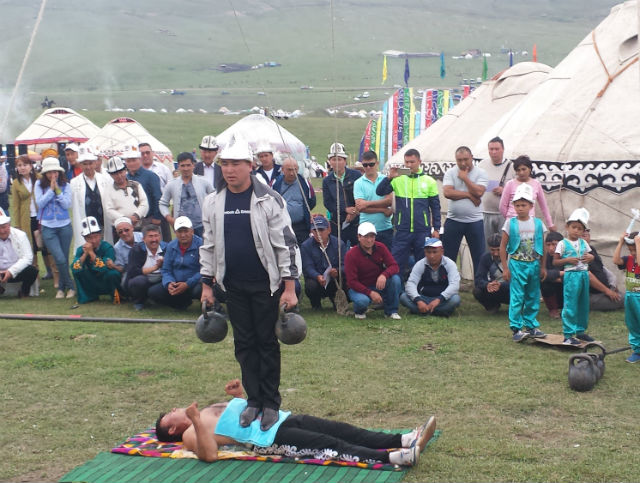 Opening act. The guy on the ground is just the facilitator for everyone passing by with whatever they happen to be carrying.

Gymnastics archery above. This was about #34 out of 5000 times on this day where I said to myself, “Wow, I wasn’t expecting this.” These two women do handstands while shooting arrows at a target in front of a crowd, though it looks deceiving since the crowd is farther back than it appears. Their Instagram feeds that I may or may not rabidly follow are @aida_akmatova and @madimkulova_ . Look how beautiful they are. Kyrgyz girls are stunning.
Everyone was stunning. There were so many people who come from so many places, and a Central Asian face is an amalgam of so many cultures and identities, I could stare at them until a restraining order has been implemented. The best thing about the event is that everyone had their best traditional clothes on AND were open to having their picture taken. These days how often does that happen? No one cared if you had a press pass or were a tourist—and it was all free and open to everyone. It was dizzying how much there was to see. I’ve never taken more photos in a single day in my life. 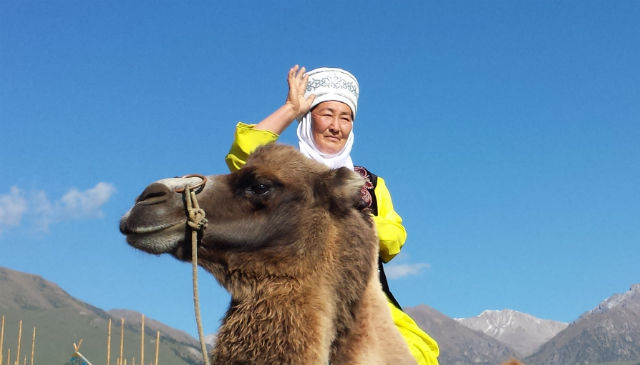 There were two main spaces for the World Nomad Games: the sports events at the hippodrome and arena in the lakeside resort town of Cholpon-Ata that I disliked last time I passed through three years ago, and a cultural “ethno-village” that was set up in the Kyrchyn Gorge in a beautiful setting about 50km away. The village comprised hundreds of yurts and tastefully-constructed little subsections for each region in Kyrgyzstan, so you could see, for example, each region’s style of shyrdak, which is a thick handmade felt carpet and the background to my Twitter page. 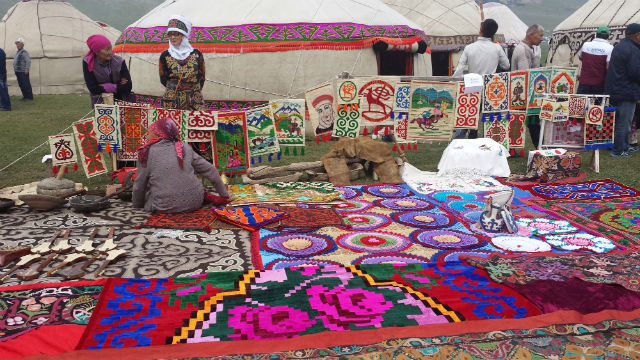 Beyond that, other countries had their yurts: Qatar, Kuwait, the Emirates, Denmark had a tacky corporate tent, and USA had a big stage where the kok boru guys were dragged on to talk about cowboy life in America and do lassoing and whip cracking demonstrations even though they were dead tired. We also, and I regret reporting this—our hearts are in the right place, I promise—but we tried to teach a bunch of local kids how to play American football. We decked them out in uniforms, pads and helmets, and it just seemed very out of place with everything else going on. 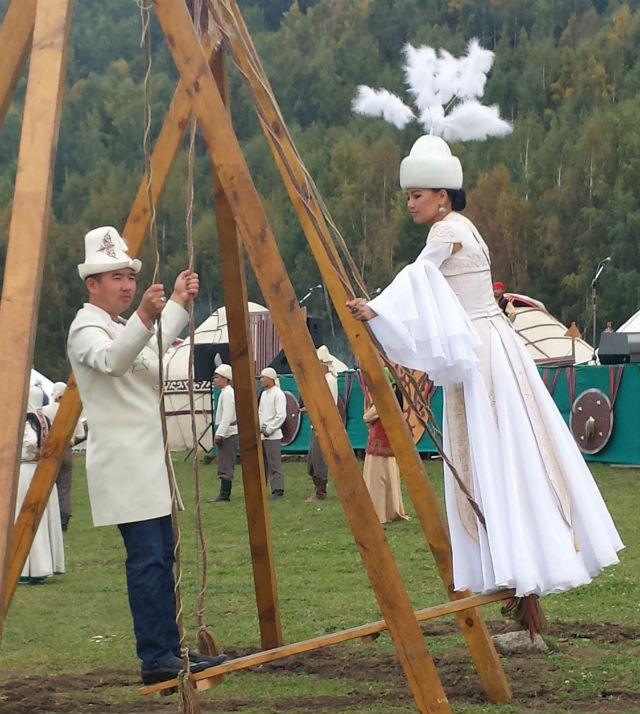 Part of the Kyrgyzstan government’s reasoning in giving me a press pass is to promote awareness of nomadic people and their cultures. Even Mr. Traveler here needed this awakening, and I had already been in this area before. (Get ready for a name drop.) It reminded me of the last time I was in Syria at the Damascus Airport arrival hall and I saw the whole of the Middle East arrive. A local who knew everyone by the way they dressed did a play-by-play for me of the pageantry: here come the Lebanese Druze Christians, the Gulf Arabs, Saudi sheikhs, those are Palestinians because of the headdress, that’s an Egyptian-style robe…
I needed the same commentary here. I couldn’t identify everyone, and there were so many distinctively dressed people it should have been easy. Every face looked like 100 stories. I do know I saw more Turkmen than I will ever see as long as their country remains reclusive, and southern Kyrgyz proudly told me they were from Osh or Jalalabad or Naryn.
I wonder why the Games aren’t run every year; is trying to organize nomads akin to herding cats? In this part of the world “nomadic” doesn’t necessarily mean they are on the fringes of society. In almost two-thirds of China’s land Han Chinese are in the minority, though the Chinese government is quickly trying to change that by encouraging westward migration.
In Russia, which I just passed through, I was surprised to come across all the “republics” and pockets of non-white Russians: Buryatia, Bashkortostan, Tatarstan, and the many ethnic Kazakh enclaves in southern Siberia.

The government gave me a press pass and they also gave me a place to stay for six nights and fed me three meals a day if I agreed to go back to the hotel for lunch, which I never did. They apologized at the first press conference that many of us would have to have roommates, but mine never materialized, thankfully. Everything was basic and fine. We had transport to the venues, but it was maddeningly unorganized and I hitchhiked a couple of times and took the public shuttle, too.
I had wondered why the Kyrgyz government would accept a blogger—if that is what I should call myself—without the big audience as other, more well-established people on in the travel community. I am not a popular blogger in any case. I don’t have advertising on my site; I am not exactly an influencer. It was generous of the government to accept me.
There was a funny moment when I saw perhaps the real reason I had been accepted. A group of us press were in a van headed to the Kyrchyn venue. Security was tight—Steven Seagal, hello?—and our driver and assistant had to keep saying, “Press, press” in Russian to let us through each roadblock checkpoint, but as we got closer they weren’t so quick to let us through and it became, “Press, press…American.” Even that wasn’t enough farther on and they fabricated stories about us bringing satellite equipment.

This was the moment when they took the blogger who complained the most about the hotel food in the last World Nomad Games and dragged him across the venue. Big belly laughs all around.

There was an outdoor press conference at the Kyrchyn venue and as I walked by I heard the speaker say the budget for the games was $500,000 dollars. Someone in the audience asked where that money came from, and there was a pause before she said, “From members of the CIS states,” meaning Russia, I assume. Next time she might as well go full-evasive and say, “From countries that commonly appear on world maps.” 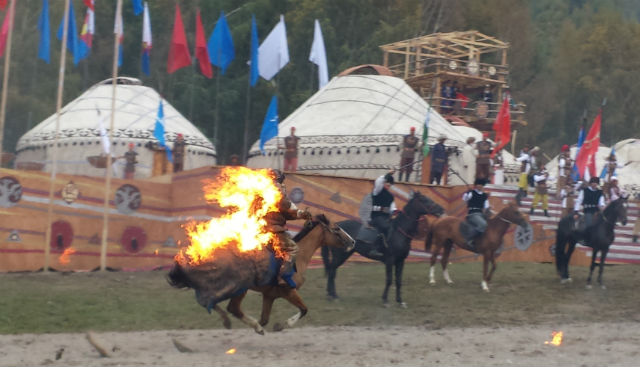 This was the moment when they took the blogger who reports on the underbelly of the Games’ finances and ignite him. Huge crowd-pleaser. 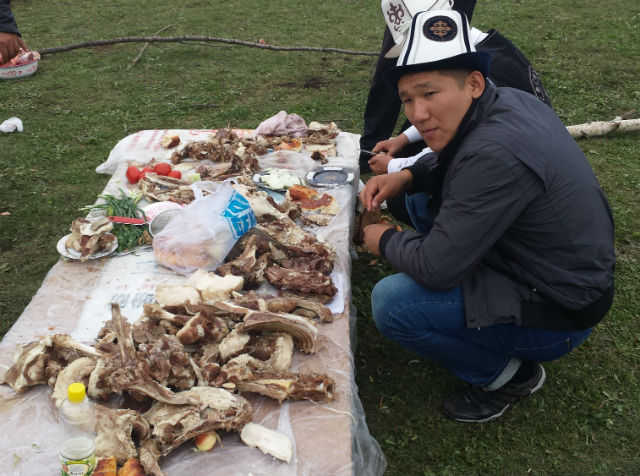 In the back of dozens of yurts people were boiling sheep to feed the crowds. They would toss it all out on a table and everyone ate medieval-style. This made me rethink my plans to sell tofu and fair trade arugula and hummus sandwiches at the next Games in 2018. 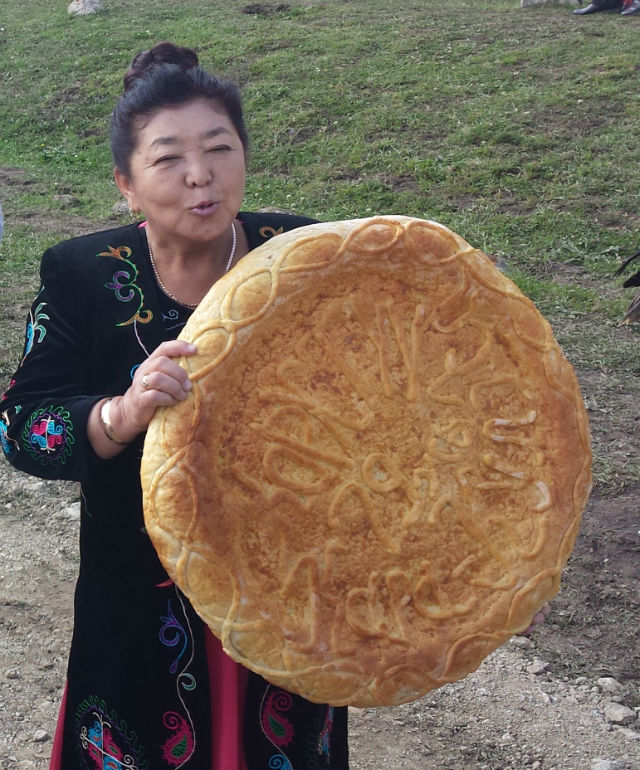 Singing the praises of giant bread.

A friendly spice merchant from Osh in southern Kyrgyzstan in deep relaxation. 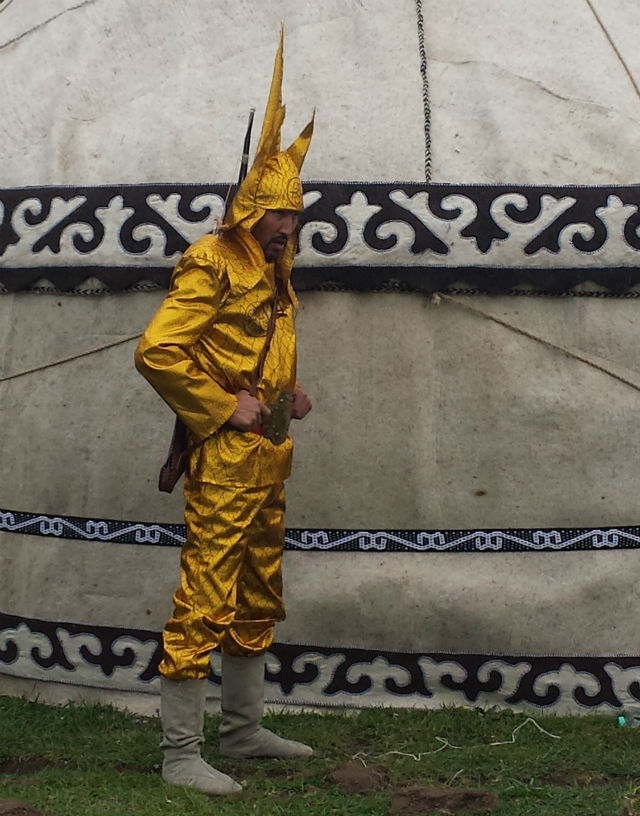 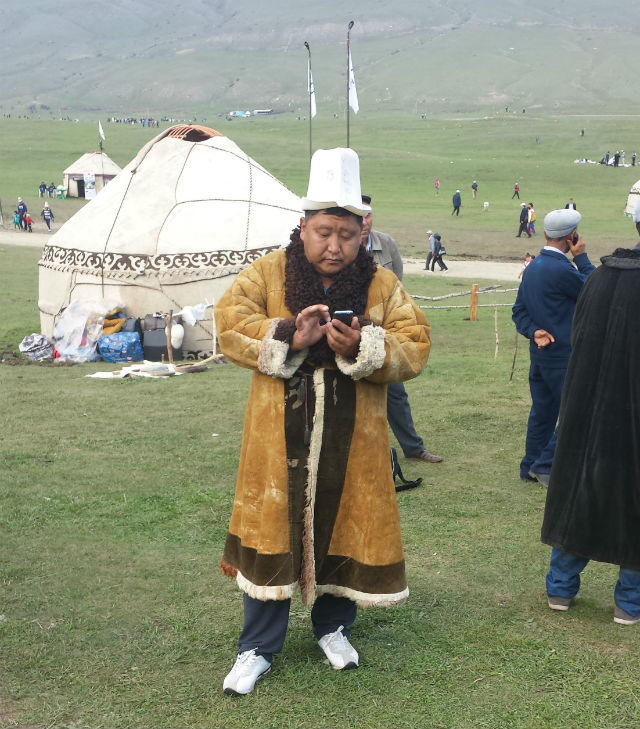 Everyone was stylin’ for the event, but those aren’t antennae sprouting from his hat. See the yurt in the background? I have been fascinated by yurts since I was in Mongolia last month, and they had a yurt-building competition as part of the Games (winning time was under 11 minutes) but I hardly spent any time checking it out since there were dozens of other things going on.

An unexpected benefit of being on a press junket was meeting the press from other countries and some of the other bloggers who are among the most popular in the game. It was like meeting an advanced version of my species. These are professionals; they don’t need to do anything else in life to survive. I had imagined that they were going to be full of themselves and unapproachable, but I couldn’t have been more wrong. Among them were:
nomadasaurus.com
uncorneredmarket.com
thatbackpacker.com
nomadicsamuel.com
wildjunket.com
I’m kind of a loner as I don’t swim in these circles, so it felt like going to a high school reunion and seeing your shining peers. At the end of the day, though, there is really no difference between them and me other than my lack of talent and ambition. None! 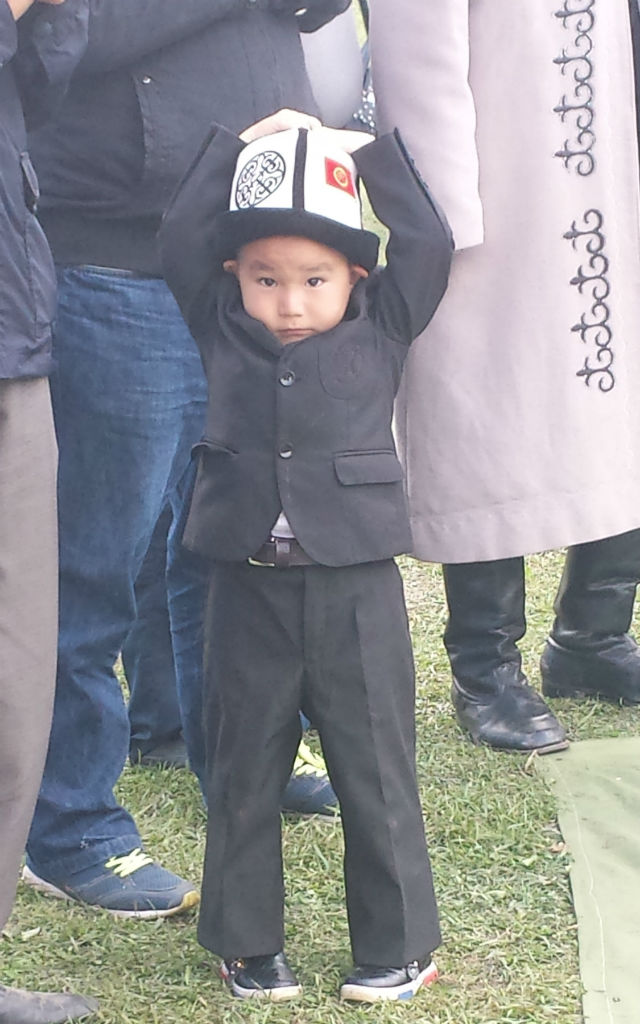