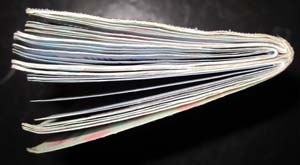 When your passport looks like this, you clog up the line at immigration

PASSPORT and VISAS
Will you get your passport already?! There’s nothing to talk about until you do, and for my fellow Americans, it could take a long time.
If you only need to renew your passport AND it still has more than six months validity, don’t do it in America.   Instead, renew it abroad at any embassy or consulate.   It will be faster and easier and the cost is the same.   If you go by any embassy and see a zillion people waiting outside, they have nothing to do with Services for American Citizens, which often keeps weird hours–rarely the same opening hours as the embassy itself.   Check the website before you head over both to confirm hours and to see if it is by appointment only.   While you are there you can sometimes get a few old magazines to give away to locals practicing English.
The photo requirements are very specific.   Every embassy will give you the address of a local photo store that can do the photos for you, but the cost could be anything since they are very specialized photos.   Perhaps get the photos at home and then apply abroad.   I’ve had passports issued in Antwerp, Belgium (lost passport), Istanbul, Turkey (stolen passport), Bogota, Colombia (expiring passport) and Budapest, Hungary (before a fee hike for renewals).
By now I think it is true everywhere that embassies overseas will process your new passport back in USA and then have it sent back to the embassy, but this is still faster than doing it by mail at home–if you have the time to wait in the country you are in. In Budapest it took me a week, but I was able to keep my old passport in the meantime, too. And regarding the photos, in Budapest I managed to use a three year old homemade picture that I photoshopped to look brighter and they accepted it. They now have a photo machine on the premises, but if they didn’t and my photos weren’t accepted, it would be a pain because appointments weren’t so easy to come by, there’s the inconvenience of going out to get legit photos and the return journeys to the embassy…
This new stab at efficiency is bittersweet; my Bogota-issued USA passport had often aroused interest at immigration and customs checkpoints.   Last year I was walking across the Romania/Hungary border and once the Romanian guard started examining my passport, his eyes widened and he kept saying, “Colombia? Colombia?” while sniffing his nose enthusiastically, like I was a drug mule. I had nothing to hide and I sniffed like him, tapping my big nose and repeating, “Colombia! Colombia!”   We had a nice laugh together.   You don’t get that kind of fun from a Seattle-issued passport.

VISAS
Visas, the permission to visit another country, can form a roadblock on your plans and be a real headache.   It’s a shame not everyone can have Japanese or Swiss passports.
Look at a map and see how easy it appears to be, for example, to take a nice trip through the former Soviet ‘stans of Central Asia, but start to check for the visa requirements and you throw your hands up in despair. This is a double-edged sword for Americans as many countries’ visa requirements are based on reciprocity and USA charges at least $140 for a visa, so other countries charge the same for Americans. It’s why I have yet to go to West Africa. Look at this map of visa costs.
I have to say, America has some very onerous restrictions for foreigners to visit.   I have argued that reciprocity is misguided because, for example, there aren’t millions of Americans trying to settle in Brazil (though I am one!) so in that sense it isn’t a relationship of equals, but all the same, any foreigner applying for a visa through a US embassy or consulate knows that it can all come down to how the immigration officer is feeling that day.   Visa fees aren’t refunded either, if the applicant is rejected, nor is there an appeal process.   Even after someone has a visa, there are no guarantees as it can then all come down to how the immigration officer at the arriving airport feels that day. It’s all more arbitrary than it should be.
Visas aren’t as straightforward as you’d think. Not only do fees vary by nationality, but it isn’t uncommon for the same country to charge different amounts and have wildly different requirements from embassy to embassy. For example, say you want to go to Bolivia.   You will pull your hair out trying to get a Bolivian visa in USA.   It’s even worse in Paraguay, where they want a statement from our national police (which doesn’t exist) that I have a clean criminal record.   Even within Argentina, in the Buenos Aires embassy, they have a number of hoops they want you to jump through, but as you head to the consulates in northern Argentina, closer to Bolivia, it becomes easier and cheaper to the point where all you need is some cash and a (fake) onward ticket.
Visa rules can change quickly, too.   Even The Great Traveler here bought an incredibly cheap ticket to go from Manchester, UK to Banjul, Gambia on XL Airways (US$140 including taxes, credit card fee AND ticket pickup fee), but unbeknownst to me, just months earlier Gambia changed their visa requirements.   Suddenly Americans needed to get a visa in advance AND it cost US$100 AND I was far away from an embassy.   Bye-bye, cheap ticket. 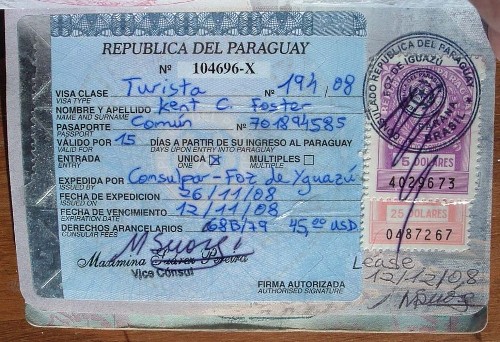 Often you get a feeling for a country when you go get its visa. In the case of Paraguay, I went to the consulate just across the border in Foz de Iguacu, Brazil. It wasn’t a busy place. Who goes to Paraguay? The friendly official there invited me to sit down in his office, humored by my attempt to speak Spanish though only a stream of fractured Portuguese was coming out of my mouth. When I showed my American passport he murmured something and got out his cell phone, touched a few buttons and set it on the table between us. He leaned back in his chair and the song “You Can Do Magic” by 1970s pop band America started playing. Even though I live for surreal moments like this, I didnt want to sit silently across the table and have him gaze boldly at me while the lyrics, “You can have anything that you desire…and you know you’re the one who can put out the fire…” were in the background. It was so odd that I didn’t mind when I saw that they made a mistake in my visa, that it expires two weeks before it was issued. (At the border they were less amused.)
It’s a hobby of mine to go to the North Korean embassy anywhere I am just to see what they have to say to me when I ask about a visa.   Yes, that’s my idea of fun.   Did I mention I am single?