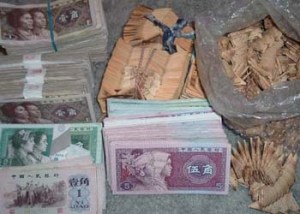 Chinese money, the most beautiful in the world

MONEY, CREDIT CARDS AND INSURANCE
I don’t budget.   My thinking is, if I have about $3000, it’s time to travel.   If I want it to last, I can hang out longer in places like India or Indonesia.   It’s another reason I like one way flights: I can just go home when I run out of money. Simple.   Few people can or want to do it like that, but what kind of person are you?   Are you disciplined with money?   Are you always caught off guard that you need to take money out of an ATM?
Approximating travel costs and formulating a budget isn’t hard to figure out.   Hostel and transport websites show how much sleeping and buses/trains cost, or check a guidebook and factor in that prices have risen a bit.   Don’t forget you’ll be spending on tours, boat trips, scuba dives or big tattoos of TheDromomaniac.com across your chest.   The variable that might be hardest to pin down is drinking.   If you’re a party animal, the money can fly no matter where you are, and then late nights beget taxis and so on.
If contemplating a purchase, don’t always convert into dollars or euros as you can talk yourself into anything that way. Instead, think of what you can buy locally with the money. In Indonesia I can buy some hand-made batik table placemats as a gift and mail it to a friend for 100,000 rupiah, but with 100,000 rupiah I can buy ten incredibly delicious dinners in Ubud at a pretty place overlooking the rice paddies at sunset. Nobody gets gifts from me in Indonesia.
If you think you are going to save a ton of money by visiting CouchSurfing hosts as often as possible, they may very well want to go out to nice bars and restaurants or do some activities, so be prepared. It can end up costing nearly as much as if you stayed in a hostel and ate stuff from a supermarket, but the experience of visiting someone local will be worth it. Don’t subject everything to the monetary bottom line.
When starting out, try budgeting for a week at a time and see how far off the mark you are. If you are in a panic that the money might not last for your trip, remember that moving around always costs more than slowing down and spending more time in fewer places, which is good advice in general. Be flexible. Go to a beach or a smaller town or stay in the suburbs. So many trips people take are buzzsaw-fast. They blow through money and are in such a constant state of exhaustion that they need a vacation after their vacation.

Debit Cards
This is the way to go but have a backup plan if for some reason the card doesn’t work or gets sucked into the machine. Carry some emergency cash. Check with your bank about the fees associated with using your card at foreign ATMs, namely, are withdrawals charged at a straight percentage or a flat fee or worst, both? Right now I am using a Schwab card that reimburses all my ATM fees anywhere in the world I am. Very happy with it.
Keep the 24-hour telephone number for the bank or credit card company somewhere separate in case it is lost or stolen, or have it already in your Skype list of contacts. 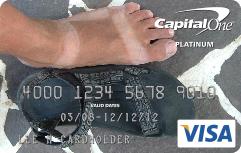 Credit cards only remind me of the world I want to leave behind, so it’s hard for me to muster much enthusiasm about this necessary evil, though I’m way stoked about Capital One because I’m able to pick the picture on my card.
I’m not a very good consumer to accumulate frequent flier miles or points with credit cards and it can be a tricky thing.   It’s best not to constantly chase the best credit card deal by opening and closing accounts because this can be bad for your credit score.   I see this often espoused, but I am glad I have the authority of the New York Times to back me up. In July 2012 I also wrote an extended blog post about the potential pitfalls of “churning”.
The whole thing is a racket (why should bad credit history be better than limited credit history?), so ideally, you will find something the first time that works well enough for you.
Nonetheless, sometimes your hand is forced because credit card companies can and do change the terms and your once-killer deal becomes a liability.   Annual fees, dormancy fees, currency exchange fees–it’s a lot to keep track of.
Keep in mind that in many parts of the world, merchants in smaller shops and travel agencies often charge at least 3% extra to use a credit card to offset their costs of accepting it even though they aren’t supposed to.

Can you get by without a credit or debit card?
Aside from peace of mind in an emergency, there are only two main things you need a credit card for:   flight tickets and ATM machines, but those are big things.   It’s harder and more expensive to book flights with cash, and travelers checks are going the way of the dodo bird (though a friend recently in Thailand says she preferred using them).   Only in Japan can you realistically and safely get away with carrying a ton of cash, just like the Japanese commonly do.   Know the limit on how much Japanese can take out of their ATMs in a day?   The equivalent of US$10,000! 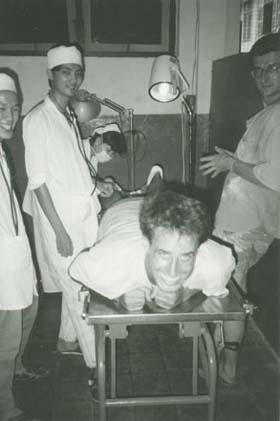 I’ve never had travel insurance.   I have a deep mistrust of any insurance.   This may be my irrational side which colors my views, but I believe an insurance company will find any excuse and resort to any gambit to deny coverage and that it will be endlessly frustrating to deal with them.
If you already have health insurance, check to find if you are covered abroad and precisely what for.   It could only be for life-threatening emergencies, but that could be wide open for interpretation.   Also find out the procedure the insurance company wants you to follow (translations of medical reports?   reimbursements?) and what paperwork is needed should something happen.
I go abroad for any operations if at all possible.   I have had three elective surgeries in Hungary, one semi-emergency surgery in Denmark and as you can see in the photo here, one “minor operation” in a Vietnam hospital that made for a great story.
In California at an Iron Maiden concert someone threw a whiskey bottle and hit me in the head.   It was five stitches in the local hospital, but I think I had insurance at the time. I only bring it up in case someone is googling “Iron Maiden and Estonian toilets”; I want my website to come up first.
I would very much like to hear anyone’s experiences with insurance companies, positive and negative.