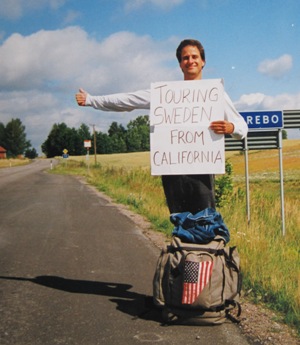 Look at that impeccable form from my youth: standing tall, hiding my flip-flop feet, the lethal smile---how could anyone pass me by? Actually, if I am using a sign like that, it means it is hard to hitch and I have to resort to gimmicks.

HITCHHIKING
Hitchhiking, like spicy food, reminds me that I am alive, so don’t reject it out of hand! Give me a chance to persuade you and if I can’t do that, I’ll introduce you to some interesting alternatives that most people are unaware of.
Hitchhiking is about saving money, sure, but it is also about life, adventure, about saying yes, taking chances, embracing the unknown. I don’t know how you can hitchhike and look at the world the same again.
Hitchhiking provides great conversation, insight into the country you are in, invitations into homes, and friends I still have to this day. Out of the drivers’ kindness I have been given food and drink, had money forced on me (Japan really deserves its own book), and countless people have gone out of their way to help me. You meet people you never would otherwise like this Serbian nut.
When I first started I felt foolish and vulnerable and told myself it would never work, but I threw myself to the wolves and simply went for it. From Belgium I hitchhiked all the way up beyond the Arctic Circle, partly on the bus of a Swedish girls’ soccer team, totally triumphant. I’ve hardly stopped since.
I am big and tall and although extremely handsome, still not the type you would expect to get rides. I can also look downright scary, yet I am relentlessly optimistic I will get to my destination. Sometimes I barely have a destination. In Tokyo and Osaka I’ve hitched between flea markets. My confidence in hitching is such that I have hitchhiked to an airport where I had a non-refundable flight ticket that same day (i.e. if I miss my flight, that’s it, no refund). That is a push-all-your-chips-in move, but I have successfully done it to Kuala Lumpur, Fukuoka, Amsterdam, Weeze/Duesseldorf, Frankfurt/Hahn and Frankfurt/Main (twice).
This is an excerpt from the book “American Pictures” by Jacob Holdt, a Danish traveler and inspiration of mine who can rhapsodize about hitchhiking much better than I can:

The greatest freedom I know is to be able to say yes; the freedom to throw yourself into the arms of every single person you meet. Especially as a vagabond you have the freedom, energy, and time to be fully human toward every individual you meet. The most fantastic lottery I can think of is hitch-hiking. There is a prize every time. Every single person can teach you something. I have never said no to a ride–even if there were pistols lying on the front seat, or four sinister-looking men wearing sunglasses sitting in the car. Every person is like a window through which the larger society can be glimpsed. 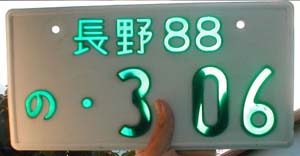 If I ever saw a car with one of these see-through license plates stop for me in Japan, I became nervous as these are the plates of choice for the yakuza, or Japanese mafia. The plate fits on to a shallow box with a light inside. It looks very cool at night. I aspire to be a Japanese gangster just for the license plates.

Is it dangerous?
Can I challenge the notion that hitchhiking is dangerous? Am I a freak of nature, living on borrowed time with my good luck? What’s so special about me? Let’s say that the worst happens tomorrow and I’m robbed, my bag is stolen, I’m left with nothing and as the thieves drive away, they yell out the window that The Pixies were overrated. It would be a crusher, but that measured against about 25 years and 100,000km of hitching, the thousands of people that have given me rides, the endless positive memories and experiences? Maybe it’s OK to depend on the kindness of strangers.
I know hitchhiking requires a leap of faith that people take in other parts of life, but resist in this case. It is understandable to be gun-shy about the perception that you are putting yourself at risk. The worst that has happened to me is once in a long while persistent gay men pick me up and make a move, but I say no and nothing comes of it. Now at least I have a sense of what women go through all the time.
Everything, and I mean EVERYTHING has happened to me while hitchhiking–except getting robbed. This is in spite of a recent trip in Europe at the Germany/Belgium border where a small two-door car with two guys in the front seat stopped–a no-no as you become totally trapped in the back seat of the car–but I got in anyway and as we pulled away the passenger turned around to me and said, “OK, now we take all your money and rape you”.

Hitching in USA is a hard sell
No one needs to tell me that hitchhiking has a very negative image in America and connotes horror movies and escaped prisoners. I was scared to try it, too, and the first time I threw caution to the wind was going from Brattleboro, VT to Hartford, CT, and not only did I make it, an old Jewish couple took me last and invited me into their home for the night. Later they announced that they had to go to temple and would I mind being on my own for a while? That’s trust.
If you live in the mountains of a free-thinking hippie state like Vermont or good old Oregon where you can hitch right on the highway, you know it is a small part of the local culture. Conversely, when I lived in Florida and asked a local cop if hitchhiking was legal, he seized up in contempt at the question and at me for asking it. Every state has different laws, though even in a state like California where it is legal, police can strongly and persuasively discourage you from trying.

Is a hitchhiking woman an oxymoron?
Obviously, it’s harder for women to envision “the life”. The only country where I’d say it’s safe to try it on your own is Japan with Germany a distant second.
Like anyone else would probably say, I recommend first hitching with a guy–that way you only have one person to worry about! The best place to meet like-minded people and look for partners is Couchsurfing’s women’s hitchhiking group. (One woman signed up for the group stating, “I don’t want to be kept from hitchhiking just because society keeps being oppressive against women.”)
The common sense precautions are too common sense for me to reiterate now, except one idea: take photos of your passport ID page and perhaps the page that your entry was stamped, plus your drivers license, international drivers license, yellow vaccination card, credit cards and anything else that could be useful if they were stolen and email them to yourself or safekeeping.
Be prepared for endless rounds of 20 Questions from drivers, but repeating your life story and present journey is a very small price to pay for someone to give you a free ride. 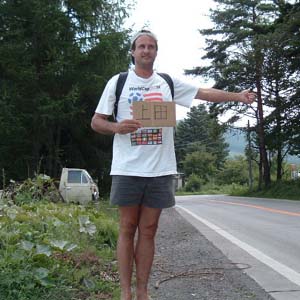 Hitchhiking is a vast science and a website all of its own. My zillions of stories, the dos and donts, strategies, the raging debate of sign or no sign, etc. etc, I am saving the details for my book, “The Worst Hitchhikers Have the Best Tans”, which goes against my point, but no matter. In the meantime, for inspiration and tips check out:
—Digihitch has changed their format as now it is all forum, but it still seems to be the place for everything hitchhiking-related.
—Couchsurfing has a nice general hitchhikers group worth checking out. I am heartened that lots of people are posting with questions, looking for people to travel with, etc. It seems that Eastern Europeans are at the forefront of this small increase in popularity. It would be a very smart young American guy to reply to one of the many postings of an Eastern European girl for a partner to hitchhike from France or Spain or wherever back to her country. You get her local expertise and perspective from being on the road and she gets the comfort that you are safer as a couple, plus it gets you to Eastern Europe where it’s more interesting.
—Hitchwiki is something I use a lot to find the best starting places. My only beef is that you don’t know how old the information is.
—Hitchbase is similar to Hitchwiki, but the only real advantage is that every entry is dated.
—Hitching in Holland, unbelievably detailed. Every country must have something a website this in its own language. Ask a local to help you find it.
—I like the crazies behind this Lithuanian hitchhikers club, too, though there isn’t very much practical information here.

Still not sold on the idea? Are you asking yourself, “If hitchhiking is so great why isn’t everyone doing it?” Popularity doesn’t automatically infer it’s a good idea, especially if the common wisdom is inaction and not trying new things. I am not always so gung-ho, but I get encouragement from discovering that people like this guy still exist–great photo, too.