By any standard the hitch from Frankfurt to southwest Hungary was a disaster, definitely in the Bottom Ten ever, but it was a true adventure and I have some satisfaction in making it.   I just wish it hadn’t lasted 28 hours.
I have some excuses for the hitchhiking horror, none of them worth fleshing out that I am in the mood to defend right now (not being fully prepared, without my little USA flag, a tired face, etc.) but maybe the bad omen was that my first ride sideswiped a car at the gas station as we arrived. The aftermath of that was interesting.   We scraped a parked SUV and the drivers, an old man and a young woman,  get  out, softly mutter some small talk to each other, and start to exchange info. I was waiting for an explosion of anger, but it was civil and business-like; no recriminations, no emotion.
The other thing of fantasticosity at the gas station was the toilet.   I had only seen this once before. You flush and the seat rotates while the gizmo pops out and cleans it.   I assume the Japanese invented it.   I will put video on my toilet photo spectacular page.   I can only wonder what kind of freak the other person in the bathroom thought I was when the flash from my camera lit up the room.
Did I mention that I don’t have a girlfriend? 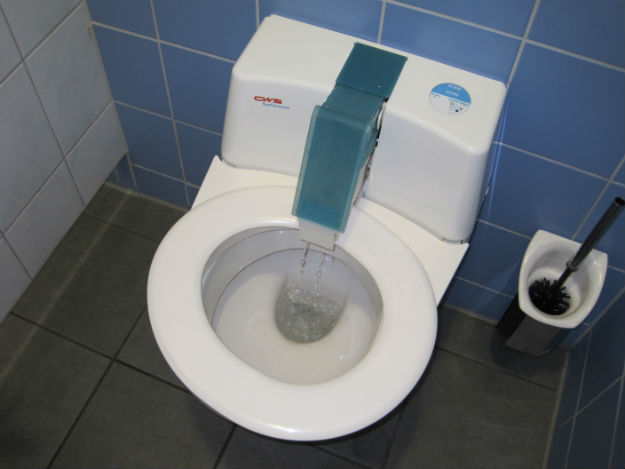 One of the greatest toilets in the western world

I waited a long time to get out of there, but made it 200km down the road to Nurnberg eventually, and then I really perished. Several people stopped, but they were going the wrong way. I was stuck so long that twice police came over to check my passport and me out. When they start thumbing through all the pages I get impatient as I know I am going to be there for a while; anyone seeing me with the police isn’t picking me up. The second set of police were undercover. One had a huge colored tattoo on his neck. Was he really a cop? I asked to see ID, but anyone can make a fake ID, and I didn’t like handing over my passport to two guys in a car. The passenger did have a custom computer set-up which lent some authenticity, but I can see myself getting bamboozled. What could I do? How much could I push it? The best question might be if someone with such a tattoo would get hired in any American police department.
I can’t remember ever standing in one place for 5 hours before. 5 hours! Normally I would be more proactive and do something to change my luck. I was dying of tiredness, hunger and frustration while contemplating my options should I get stuck in Bavaria for the night, and despite a view choice words that were yelled skyward, the funny thing about hitchhiking is that I never lose hope. I am relentlessly optimistic.
This isn’t to say that I didn’t think of going back to Frankfurt. It had been a pleasant weekend of visiting friends and feasting. (I am pretty sure I was skinny before arriving there.)

Slobodan!
A big, stout Serbian named Slobodan picked me up. You don’t meet people like Slobodan anywhere else outside of hitchhiking. He was a boisterous, loud guy, approaching buffoonery, who by way of introducing himself said he had an IQ of 152.
I had barely sat in his car when I was given some bread and some fantastic homemade spicy salami of which I made no pretense of being polite and savored lustily, I was so starving.
Slobodan had a huge old Mercedes, but he drove frustratingly slowly on the autobahn, saying he saved gas money doing that. He has a well-paying job in Serbia, but not good enough to avoid thinking about gas money. He desperately wanted to emigrate to anywhere that will have him, but it was tough. He could still remember the date (Dec 19, 2009) that Serbians were allowed to travel visa-free within the EU, and he was going to make the most of it. He was in the meat industry and was returning from a convention in Frankfurt, making contacts. (“Kent! What is the salary per month of meat professionals with the specialization of processing equipment and machinery in USA?”)

Slobodan became drowsy. I thought he would stop and rest. He had already said, “Kent! Let’s stop and stretch our legs and eat canned meat!” but he wanted to keep going and talk instead.
“Kent! Let’s talk about sex!” he announced. “You travel very much. Have you had any red women?”
“Red?”
“Indians! Squaws! You know!”
He couldn’t hide his disappointed that I wasn’t going to entertain him for the next hour with stories of my conquering the entire rainbow of women, but he was quickly on to something else.
“Kent! Smell this!” and he put a big bottle of cologne to my face. I took a whiff and thought all my nose hairs would fall out. It was like smelling salts.
“Strong,” I coughed, my eyes watering.
“It’s for when I cheat on my wife, so she cant smell the women.”
Then the obligatory Amsterdam red light district story comes out, and after he spent a lot of time analyzing each girl in the windows and discovers the one for him is Bulgarian, it only proved to him that Balkan girls are the best in the world. This was followed by another five minute interrogation about why I don’t marry a Serbian girl.
Slobodan was upset at his two sisters who had managed to move to Toronto for not helping him get out. For him it was easy: he said he’d divorce his wife (and presumably abandon his kids) to marry anyone in Canada they could come up with, but to his consternation the sisters didn’t want to go along with the plan.

Please stay awake…please stay awake…
I could tell he was getting sleepier and it was my job to get him talking. I was in Serbia last year and I know from experience that Serbians can’t sit idly when I bring up the hot button topics: the war, NATO bombings of Belgrade, relations with their neighbors, and especially Kosovo. Kosovo was summed up in his question to me: “Kent! How would you feel if Texas was suddenly taken away from the United States?”
I’m all for it, but I didn’t want to distract him. He was already agitated and driving faster, and we made it to the last highway gas station before Vienna. (It’s good to have encyclopedic knowledge of all the gas stations on the route as drivers often don’t know.)
It was midnight. He felt sorry for me in my predicament but wasn’t 100% sure I wasn’t gay since I hadn’t been with a red woman, so he made an offer that made perfect sense to him:
“Kent! You can sleep in the trunk! There is a blanket! You will be warm!”
I laughed. “No, man! I will die!” but my protests probably only confirmed to him that I was a sissy.
He went to sleep in his car while I went into the truck stop restaurant to see what my options were. Before we parted he stated, “Kent! You give me your email and phone number and house address and you find me 18-year-old American girl!” I equivocated and he said, “28 is good, too!”

I approached a stern waitress who knew my question before I got it out of my mouth. I asked if I could order some food and stay a few hours, but her demeanor changed in an instant and she sweetly said I could sleep in a corner booth in the back of the restaurant without ordering food. I thanked her profusely and ate anyway. Sleep was tough to come by, and at 5am I was back on the road, still a substantial distance from Hungary. 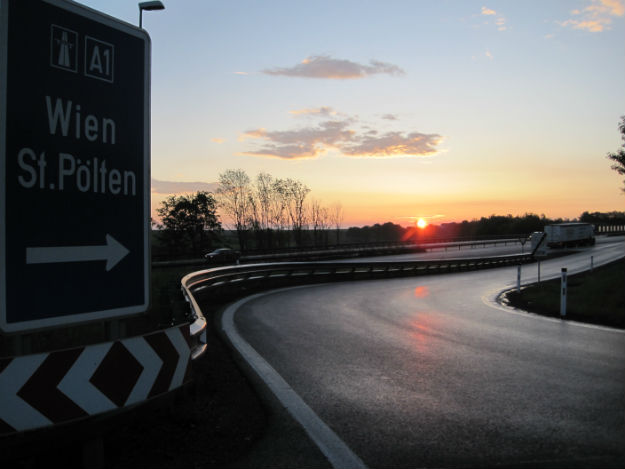 Austria at 5am was much warmer than Germany at 5pm

Normally I avoid trucks as they drive too slow, but in my dozy state I wasn’t feeling picky and I got a Hungarian trucker to take me. He was a young guy who was so excited to tell me what he was carrying he could barely contain himself: “Salt!” he exclaimed, and made a can-you-believe-it? look. “24 tons!”, he said, shaking his head.
He apologized for driving so slowly, but I liked him and let him lead me into Hungary on the eastward Budapest road even though I really should have gone south. Besides, I could sleep for an hour. I don’t like sleeping in people’s cars as it’s rude, but he said he didn’t mind and was thrilled that I could speak Hungarian with him. (I used to teach English in Hungary.)
More rides followed through pretty Hungarian back roads. This time of year in Europe the rapeseed crop makes the countryside a brilliant yellow, and there were colorful patches of wildflowers to ease my mind over the events of the past day.
There was a random police checkpoint stop with two attractive policewomen packing heat on the bucolic edge of a village. I could imagine the trouble if Slobodan was with me. The penultimate ride was a big fat Mercedes driven by a young musclehead with an enormous neck and lots of gold chains and then, fittingly, given my wretched condition, the 10th and last ride were two off-duty ambulance drivers who took me straight to downtown Zalaegerszeg, the perfect finale.