Kazakhstan! That’s K-A-Z-A-K-H-S-T-A-N. New country! Maybe #107. Maybe.
What do I know about Kazakhstan? I know it’s the largest country I had yet to visit, #9 in the world. (Algeria, you’re next.) I know never to utter the word “Borat.” I know that the sports world went berserk about the beauty of this Kazakh volleyball player. I know very little, is what I am trying to say. I don’t know much more after spending five days in the former capital, Almaty, one little urban corner of this massive land.

My head started spinning and I had to lie down when I looked into the etymology of the word “Almaty”, but everyone can agree “place of apples” is a good compromise. The “alma” part of the word piques my interest. It means apple far beyond the region: “elma” in Turkish, and good old “alma” in Hungarian. Hungary, let’s not forget, began with a wayward, errant tribe from somewhere around these parts. It was fascinating at the World Nomad Games in Kyrgyzstan a couple of weeks ago that the entire Hungarian contingent arrived in full medieval garb for the opening ceremonies and for the big show at the ethno village, they had an unexpectedly prominent role at the end of it.

It’s tempting to say that Almaty is a more evolved, prosperous and progressive version of Bishkek, but I feel uneasy asserting that. We all hope Bishkek will someday see the light and replace its smoggy marshrutkas (vans) with buses, but the two towns feel different. Almaty is more Russian, yet I see more Kazakh language on signs here than I do Kyrgyz in Bishkek. Why is that? Is there a stronger sense of trying to maintain Kazakh identity? I had plenty of questions, but I managed to meet up with only one Kazakh. I wish I had made more of an effort to see who on Couchsurfing wanted to meet. (Much-maligned Couchsurfing is still the best way to meet locals quickly, I reckon, outside of bars.) 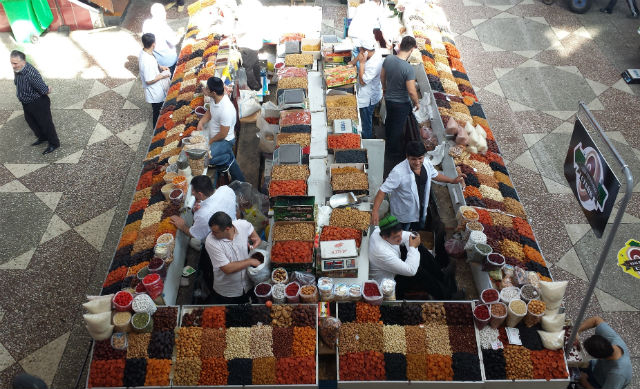 Dried fruit and nut sellers at the Almaty Green Market.

When I heard an authoritative American voice in the Green Market, I raced over to accost him and ask if I really had to register with the police. His name is Dennis Keen and he runs walking tours in Almaty. I thought I was doing him a favor when I said I would mention him on my blog, but upon further research he seems to be synonymous with the city. His quirky website is obsessively detailed—my kind of guy. 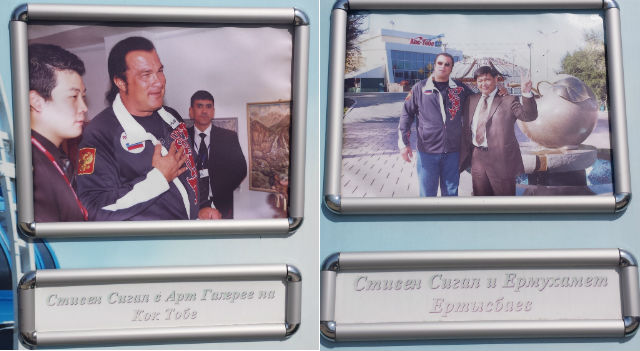 Steven Seagal, we meet again. I had been trying to enjoy the World Nomad Games in Kyrgyzstan unmolested a few weeks ago, but there Mr. Seagal was, a guest of honor at the opening ceremony. Here he is seen being feted for making the arduous five-minute cable car ride up to this viewpoint, Kok Tobe. Gerard Depardieu, another of his ilk, got the same red carpet treatment. It’s a clever gambit by these guys to cozy up to Putin and the region’s rulers. I can’t wait until I am fat and formerly famous. I’m halfway there.
When I try to explain to locals how Steven Seagal is perceived in the West, they look at me with disbelief. Out here he is a demigod. Tickets to see his band(!) in concert in Bishkek were $100—and it was sold out! 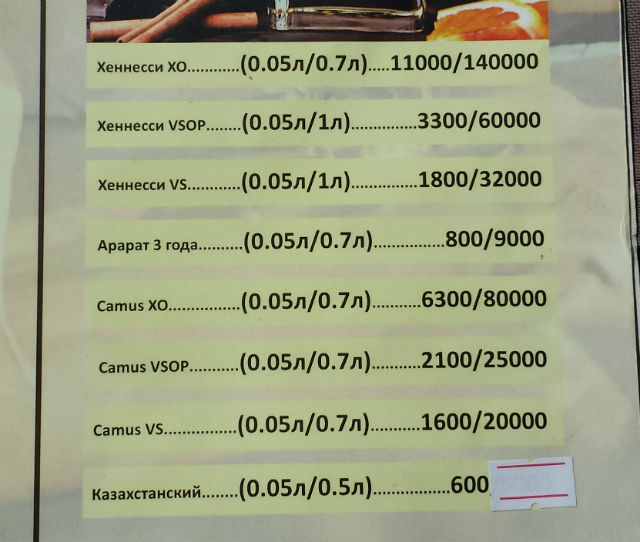 Will you look at this? 140,000 tenge for 7/10 of a liter of Hennessy XO cognac from a cafe with a nice view on Kok Tobe. That’s US$410! I checked, and you could fly to Bangkok for $300 and then probably still have enough money to buy the same thing once there. Rich people are freaks.

I read that Almaty was once ranked the 30th most expensive city in the world for expats by Cigar Aficionado magazine or I don’t know who does these ratings, but they mean almost absolutely nothing to travelers. These lists make me crazy. They are for people who refuse to make an attempt to live like locals. It’s for people who can’t live without tacos no matter where they are in the world—whoops! bad example, as that would be me. It’s for people who have an irrational craving for weekly sushi—another bad example—look, the point is that it is for rich expats, not us common folk. Yes, I just insulted us. 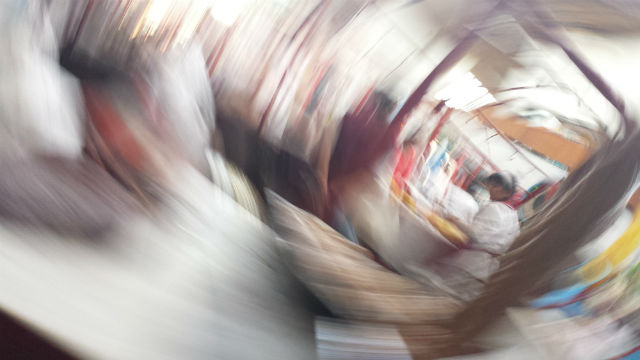 I love this accidental tornado pic in the Green Market. 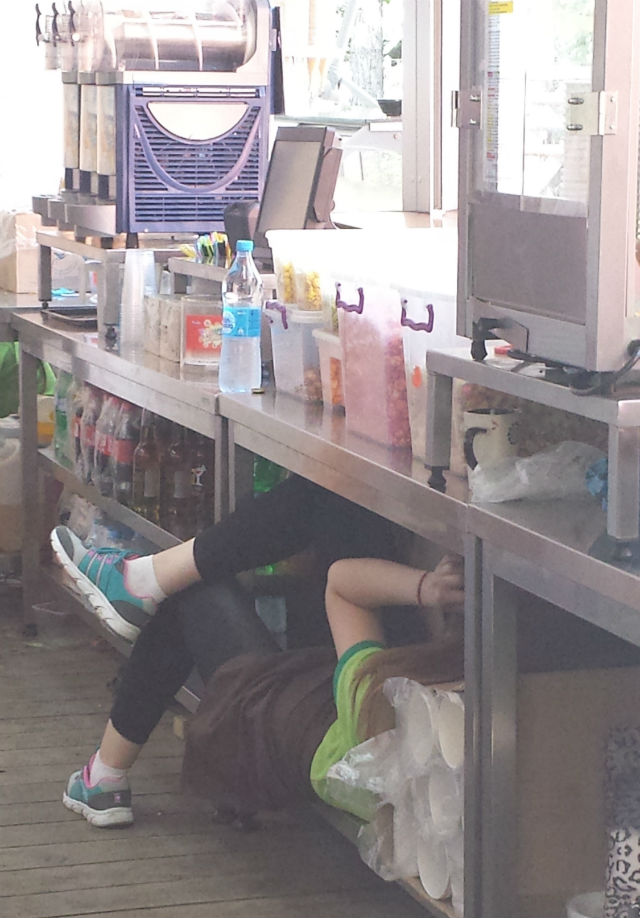 I felt bad bothering this girl, but I had to have something to drink. There were actually two girls on their phones like this under the counter; you can’t quite see the other in front. 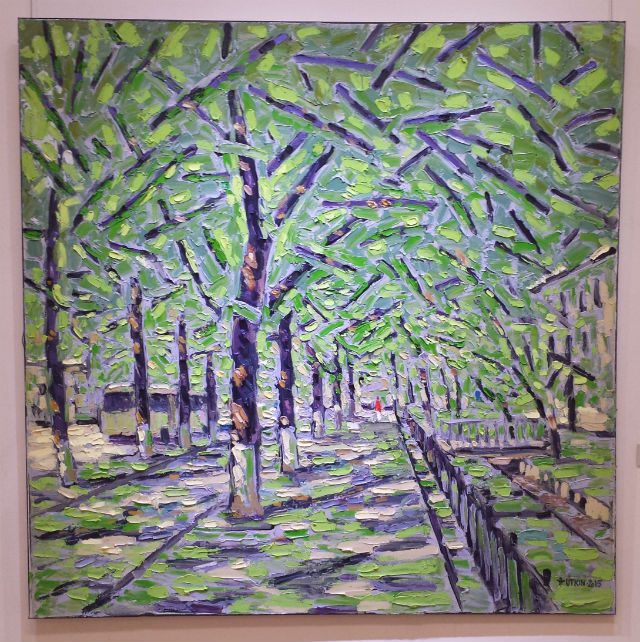 I went to the uninspiringly-named A. Kasteyev State Museum of Arts in town, half from an interest in seeing what Kazakh art was and half to deny that I might be a philistine, and I was very impressed, staying much longer than I anticipated. In fact, I went through it twice, the second time when I realized I could take photos. 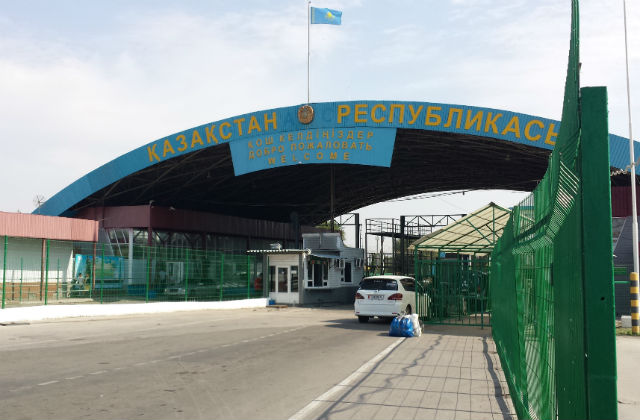 The border. I used to be shy about taking border photos as guards can get tetchy, but lately I just go for it and apologize later, which will serve me well when I am a minor celebrity overseas prisoner that President Trump will bargain hard for my release in 2025. 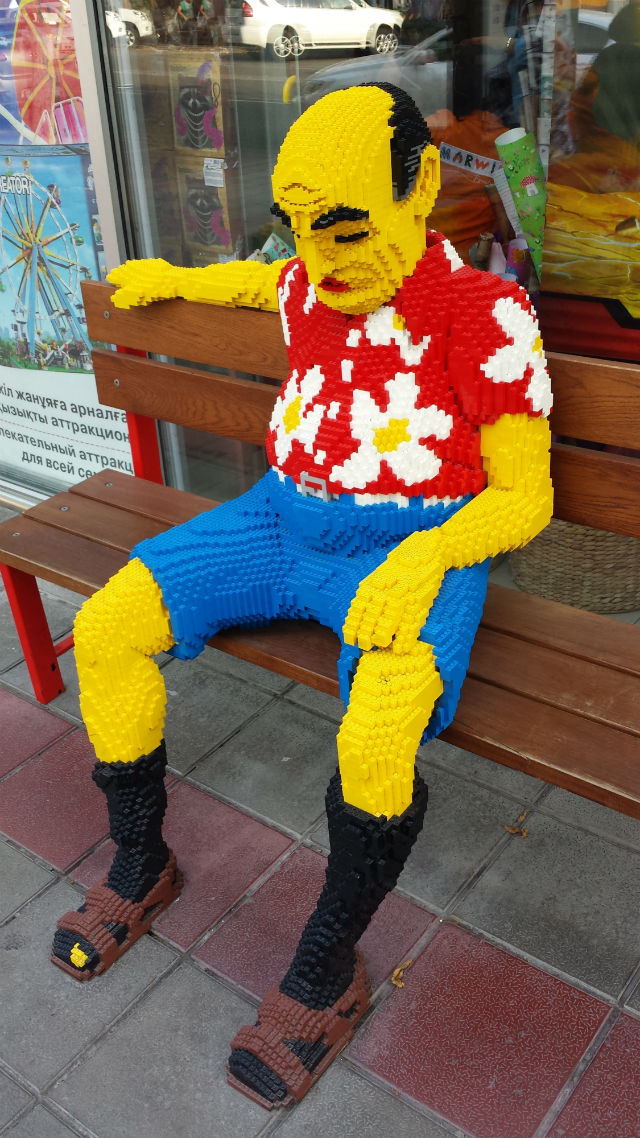 I haven’t been in Lego circles for many years. Is this normal these days? Looks pretty cool to me. 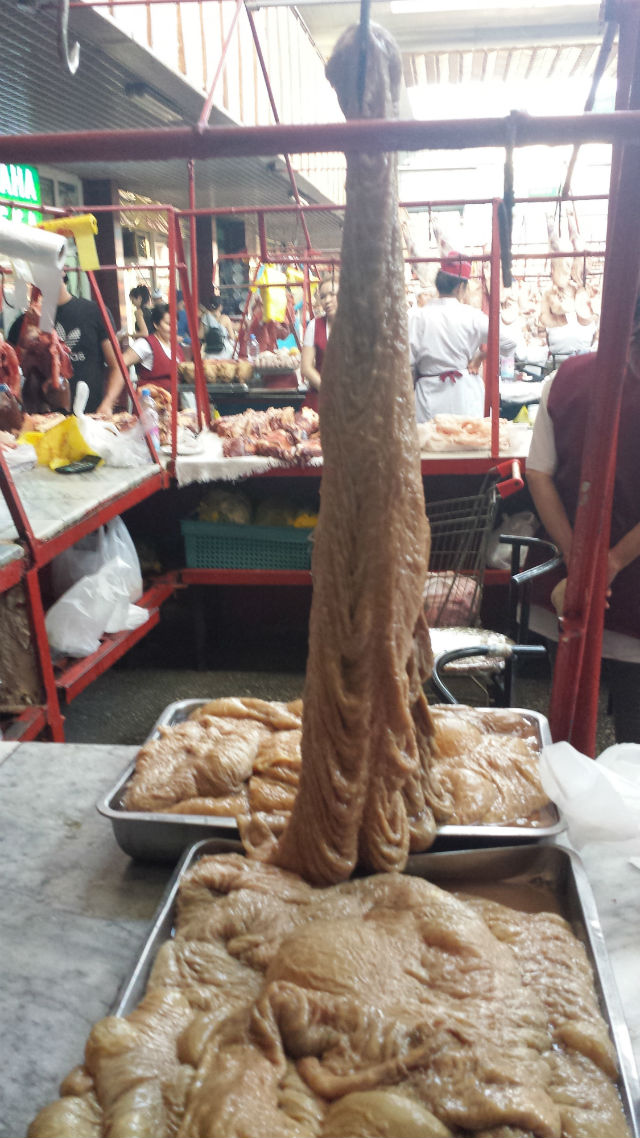 Some sort of processed slime at the market. I was in a rush to take this pic because photos are not allowed. 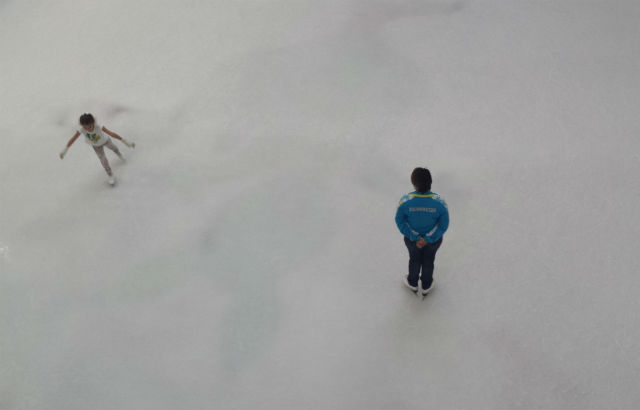 Another out-of-focus pic (You’re welcome!) but you can see how this could be a killer photo, right?

PRACTICAL INFORMATION:
Many countries now get a 15-day tourist visa, which is ridiculous for such a huge country, but I’ll take it over not being allowed to come. If you fly in you have to register with police—always a sure sign that a country is highly ambivalent about tourists. More info is at caravanistan.com. It used to be the resource, but the info might be dated by now.
I stayed in an Airbnb place for $11 a night, and then moved to the cheapest hotel in town, the Turkestan, right behind the Green Market for 4500 tenge, about $13 including breakfast.
The Airbnb place was great, but out of center. I caused a kerfuffle when I reset the router in the house, not realizing that the password had to be reset on the adminstrator’s computer, which I couldn’t explain in Russian to my hosts. (Yes, I grew up in Silicon Valley and worked for tech companies and everything.) Customer service had to be called to the house to “fix” this, which cost 2000 tenge, or about $6. I don’t know if the $6 house call is more remarkable or the fact that he arrived in an hour. 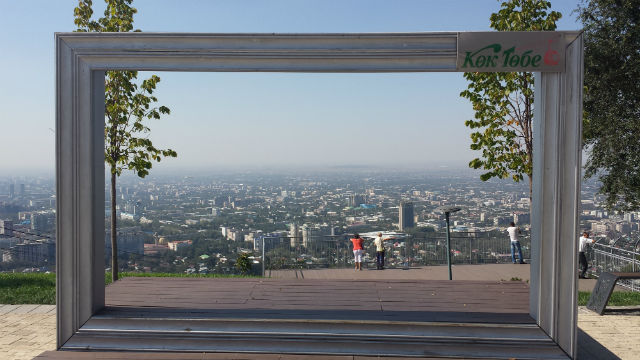 The hazy view of Almaty from Kok Tobe.