PACKING
It doesn’t have to be an agonizing decision on what to bring if you don’t mind donating or trying to sell the stuff that you mistakenly brought. You can get just about anything anywhere (lithium ion batteries, peanut butter, Hello Kitty chopsticks, dysentery) with some exceptions being contact lens solution, bacterial ointment, and feminine hygiene products of which I am blissfully ignorant about. I used to bring a harmonica on every trip as a joke to myself that I would learn to play the blues in lonely hitchhiking spots, but in that case I am too busy screaming obscenities to the world and since then I have stopped trying to humor myself.
I’m a nuts and bolts kind of guy. I like to know as much minutia as possible. Instead of telling me, “bring two pairs of pants”, I want to know what kind/material/color the pants should be–but this website is too obese as it is.
Two websites that go into more detail and where you can glean some useful philosophy are Rick Steves (forgive him for his insistence on money belts; when it is 5000 degrees outside do you want something tight around your mid-section?) and onebag.com (not meant for the backpacker, per se, but his in-depth analysis of zippers is fantastic.) 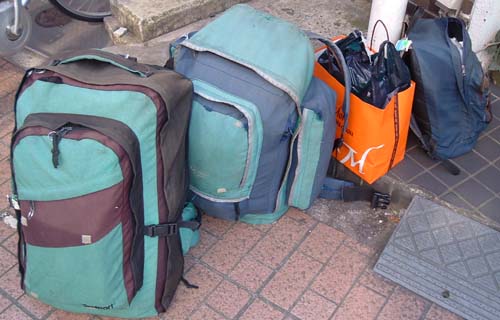 Yes, I will admit it, this is all mine, but I was flying home after a Japanese shopping spree and there was a sale on sushi.

HIDING THE VALUABLES!
I don’t like money belts or money pouches, I don’t like things hanging from me–freedom, baby, freedom! So here’s what I do and it’s a wee bit of genius: my shorts and pants have one front pocket extended and with a velcro strip across the top, bristly side down so you don’t scratch the tops of your hands. 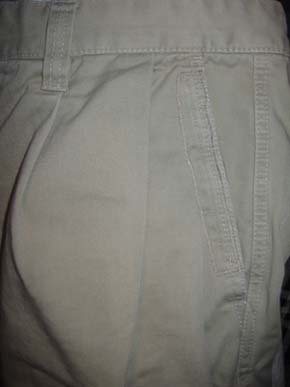 Only once has this backfired on me and it was my fault; I didn’t take proper care to make sure the velcro on my pocket was closed securely and at a Galatasaray soccer game in Istanbul I got pickpocketed in a heaving, tight crowd of people. At the time my shorts also didn’t have the extended pocket. I was young.

If demand is enormous (i.e. if more than five people ask) I will expand these main points:
Again, these tips are predicated on a rambling trip in warm weather places. This is a dissection of my backpack from a recent trip.
–For a purely tropical trip, I always consider the method of my college roommate, Pat: 10 t-shirts, 10 pairs of underwear, some shorts, and you’re good to go. We’re from California. Our official state uniform is t-shirt/shorts/flip flops. To wear long pants and shoes at the same time is suffering on an unimaginable scale. The problem with tropical countries is that they tend to worship air conditioning, so you’ll need one set of cold weather clothes for frigid bus and train rides or at least some thin long pants for mosquitoes at dusk.
–Without looking slovenly, bring clothes you don’t mind losing/ruining/giving away. I suspect I might still be traveling with someone else’s underwear from a Bangkok laundry mix-up, but what the heck.
–Here are some fightin’ words: jeans are a bad idea. They’re too heavy and take too long to dry. Some people are jeans people and wear them every day and tell themselves that they’re going to wear them every day in, say, Southeast Asia. OK, but they don’t live in the tropics every day. You will sweat to death, and then the sweat makes the jeans heavier. It’s a lose-lose situation.
–Bring all-purpose shorts that can function as something to sleep, swim and play sports.
–Don’t bring a pocket knife. It’s too heavy. How often would you use it? Probably not enough to justify it. I get a regular flimsy steak knife to cut fruit and wrap it in a napkin.
–Don’t bring a big honking bottle of shampoo or lotion or toothpaste. Bring small empty bottles and refill them along the way.
–I have big wide elephant feet and can’t always find my size of footwear so I keep an extra pair of the lightest flip flops I can find as a backup as well as for grotty showers. Quality hiking boots, too, are part of the exception to you-can-get-everything-everywhere, but think two or three times about bringing such bulk and weight. Is it a short trip and hiking is one of the main things you are doing? Fine. But if it is a small part of a longer trip, do you really want to drag around heavy, smelly, dirty shoes you are only using 5% of the time? Lugging around dead weight taking up so much precious backpack space is almost criminal. (Side question: can someone tell me how to get the smell out of Teva sandals? I can confirm they are notorious for their foul odor, but have yet to find a lasting solution.)
–I bring one very small lock with at least two keys. Some travelers lock every single zipper on their bag, but again, those little locks’ weights add up. It won’t save you from someone slashing your bag, but it’s still a mild deterrent. I never leave valuable stuff laying around in the open of my hotel room or hostel and I even lock my bag inside my room while away for the day depending on the feel of the place. (A group of us were staying in a hotel in Bangkok and we realized that everyone’s keys worked for everyone’s rooms.) To go along with the idea of bringing too little, if you decide that life sucks with only one lock, and you curse the idea that you ever listened to kentfoster.com, you can always buy more wherever you are and help the local economy.
–I very rarely leave my passport in a hotel or hostel (Brazil being the exception or if I am going to the beach alone) and almost never use hostel safes. I don’t want to itemize every single bit of currency every day with the manager. I don’t know if I am in the minority about this, because when I ask other travelers, “Where do you keep all your money?” they look at me funny and clam up.
–Lastly, please bring a journal book. Don’t simply dump a ton of caption-less photos on Facebook or Flickr. It sounds like a pain, sounds like work, but down the road you’ll realize its worth. Either document your trip or sketch stuff or, at a minimum, take notes for later. You will not remember everything you think you will. Traveling is sensory overload and the new stuff shoves the old stuff out of the brain.

WILL YOU BE BEARING GIFTS? 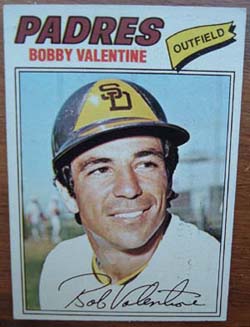 When I am hitchhiking or I meet locals who I want to give a little something, I always keep a few postcards from home for this purpose, but a lot can get heavy. I also bring some special latex clown balloons and make a few animals, but I have a limited repertoire and sometimes they pop, freaking kids out. My favorite thing to bring is baseball cards. (I also bring old Panini soccer cards/stickers if I have them.)
If you are going to a country where baseball is played, bring American baseball cards of their players from their days in the major leagues. 1980s and 1990s cards especially have very little value and can be had cheaply from baseball cards stores–if they carry them–or keep your eyes open for deals on eBay, or better yet, Craigslist. In Nicaragua every single time it was greeted with genuine pleasure when I presented someone with a Dennis Martinez card, a true local hero. In Japan it works both ways. This Bobby Valentine baseball card is a big hit since he was a God in Japan .
The exception to this is Holland; I’ve been a zillion times and I’ve never met anyone who cares about their great “honkbal” team. Shame.