Fake Onward Flight Tickets
Many people freak out when I start talking about this, that I am aiding and abetting in a serious crime and afraid that if they try it, they will get thrown in some dank airport gulag. What I am proposing isn’t for everybody and I will address the common concerns, but I advocate making fake onward flight tickets. These fake travel tickets can come in handy at border crossings and for visa applications, but they are most useful in conjunction with taking one-way flights.

No, not this kind of ticket.

The Situation
When you check in for an international flight and the agent notices in the reservation system that there is no return or onward ticket, they might ask if you have a ticket for your next flight. They will say that it is an immigration requirement. For a long time I have always been able to brush this aside by explaining that I would buy the next ticket when I am there. If they look skeptical, I try and alleviate their concerns by saying I have money, I have credit cards, I have been there before, I would open my passport to show I travel a lot, and it has always worked.
However, about five years ago I was in Hong Kong for a Cebu Pacific Air flight to Cebu, Philippines, and the check-in agent wasn’t having any of it. I said I had sufficient funds––which was good enough for United Airlines to hear when they let me on a one-way flight to Hong Kong in the first place—but in the end I was forced to buy a refundable, onward ticket from them.

Of course, when I arrived in the Philippines, immigration in Cebu could care less and never asked for it. This is usually the case. Immigration officers rarely ask; it’s the airlines who enforce this. Whether it’s the airlines or immigration, they just want to see a piece of paper. I’ve never had anyone literally check to see if my bogus reservation was valid. I have been asked to show a reservation on maybe 15-20% of the one-way international flights I’ve taken, and each time it has only been glanced at.
You never know when you will need to present it. I flew into Singapore once and immigration asked where I was going next. I said Malaysia and they asked to see a ticket. I said I was going by public bus—not a ticket you can buy ahead of time—and that was that, but I have read of other travelers not getting off so easily. (When dealing with immigration, generally, it is always good to be polite and have a quick, confident answer for everything, even impertinent questions such as your occupation. I also dress reasonably well and smile a lot, both underrated things.)

The Motivation
The reason I find myself making fake travel tickets is because I never know how long I want to stay in a country. I like traveling with one-way tickets in an open-ended, go-where-I-feel style. I rarely plan anything when I travel; more often than not, I don’t know where I am sleeping from night to night. (I try and wax poetic about the beauty and philosophy of one-way tickets here.)
For other travelers it can be as simple as wishing to stay longer or shorter than they intended. This undervalued reason, serendipitous travel, is in direct opposition to the airlines’ policies of charging an arm and a leg to change flight dates—if they allow any changes at all.

The Background
The reasoning behind the onward ticket requirement is that the destination country doesn’t want you to overstay your visa, search for work, or run out of money and become their problem. An onward ticket acts as a sort of bond that you really are a tourist and are leaving. Sometimes they will ask for a return ticket to your home country, but that’s rare and I’ve always argued successfully that I’m not heading directly back. (A fellow traveler describes the problem he had in Barbados where “proof of onward journey” wasn’t enough.)
I don’t know if it is a law or rule or regulation, but “law” sounds harsh, and breaking the law sounds, well, illegal. Let’s call it a regulation but let’s also use this as the page theme song since no one can get enough of cheesy 1980’s metal videos.
I believe that the regulation is intended for people with lesser means; they generally aren’t worried about relatively rich westerners staying longer than allowed who can easily pay a fine upon leaving if they overstay, but towards citizens of poorer countries more likely to look for work and become a burden. Of course, with cheap airline tickets these days, an onward ticket isn’t much of a barrier to overstaying.
I’ve heard that airlines do this because they are liable for flying you back if you are denied entry or they must pay a fine for allowing you to board the flight. I don’t know what’s true, but I do know it is the airlines who have the opportunity to profit from it and they do have the power to deny you boarding.

No, not this kind of ticket, but an e-ticket.

The Solution
How do I make the fake? I simply take an old e-ticket reservation and edit it as a Word document. I find a real flight with a real departure time and flight number, preferably a smaller airline that doesn’t fly from the place you are flying out, so it will be harder to confirm. For example, at the airport in Frankfurt, Germany, when I was checking in to fly to Recife, Brazil, I had a printout for an onward flight two months later (Americans can stay in Brazil for three months) from Sao Paulo, Brazil, to Montevideo, Uruguay, on PLUNA, Uruguay’s national airline. It was perfect because PLUNA doesn’t fly from Recife nor Frankfurt and wasn’t in the same alliance as the airline I flew with, meaning it might be hard to verify quickly.
I sometimes invent an old-school email confirmation. Again, I have done this many, many times. The most it is has ever been more than mildly scrutinized is by Cebu Pacific. On my last flight to the Philippines with them a few months ago, the agent had a good look at it, but I could tell she was checking that the flight was within the 30-day limit of my tourist visa.
Since I’ve never had anyone challenge me on my printout, I don’t know what wouldn’t work. A friend told me he got caught out this way at an airport once when checking in, but the airline agent took pity and told him to simply go to the airline office in the airport and get a printout of a schedule so the agent could say he was presented with something tangible.
Instead of worrying about this nonsense, one semi-sensible solution is to do what Air Tahiti Nui did when I flew one-way from Los Angeles to Paris ($269 on Airtech––cha ching!) long ago: have me sign a release of liability saying it is my problem if immigration in France has any issues with me.

The Alternatives
Some people suggest buying a full fare (i.e. expensive), refundable ticket and then cancelling the ticket and getting a refund after you have arrived. That is a valid option, but often it isn’t easy to get the refund, it takes time, there could be fees, and it’s a lot of money up front for a refundable ticket. In my Cebu Pacific Air experience, after a couple of lengthy visits to their crowded office and long waits on the phone, they said it would take months to get a refund. I then had to get my credit card company involved because it would be too late for me to file a claim…it was a pain.
Another alternative that I do not recommend is bribery. For me, that’s crossing the line unless you are able to read the situation very clearly to know that a bribe is expected, but I’m an idiot and the last to figure these things out. It very much depends on where you are, what the specific point of contention is, who you are dealing with, etc.
I can think of only two times I blatantly passed along a bribe. Once was long ago when I flew into Bali on a one-way ticket and the guy told me I had to go to an airline counter on the spot and buy an onward ticket or else he wasn’t going to stamp my passport in, but US$10 in my passport solved this problem. Other travelers told me they had done the same thing, so I anticipated it.
Another time I was going overland from Costa Rica into Panama and they wanted to see an onward ticket. I showed a ticket leaving Costa Rica two weeks later, but, inexplicably, this wasn’t acceptable. After much polite arguing, I asked if I could pay a “fine” for my transgression and I believe it cost me $10. Both were cheap solutions, but are much more fraught with risk. 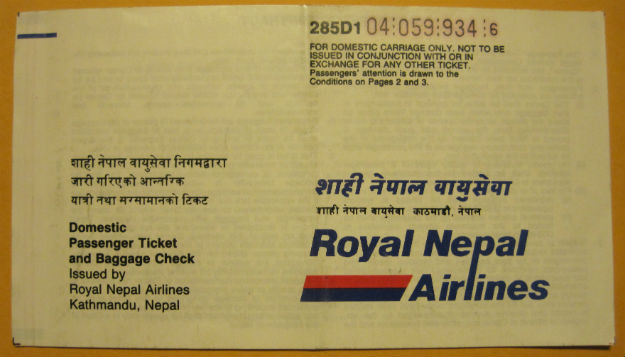 No, not this kind of ticket!

The Exceptions
Who maybe shouldn’t try this are people from developing countries who are more likely to have their information vetted and could suffer the consequences. Also, I doubt all countries react the same. The country with the most high-strung immigration is probably my own: USA, but the European Union could be prickly, too.
If someone ever took the time to look in a computer for the ticket (I’m not sure they can check beyond their own airline or another airline with whom they have a codeshare agreement, which is why you need to take care about how you go about this as I showed in the PLUNA example above) and said something’s amiss, I would say that someone else booked the ticket for me because I was having a problem with my credit card. If they didn’t blink first, I don’t know what I would do at that point, maybe buy a refundable ticket.

The Last Word
I understand some people feel uncomfortable doing this. I do it reluctantly. It’s not my nature. I’m not a person prone to deception—I get a guilt trip jaywalking—but my conscience is clear in this case because I am respecting the spirit of the law—I mean, regulation: I’m not looking for work and I don’t intend to overstay (though I wavered in Brazil; it’s that good.) I merely wish to have the freedom to leave the country when I want to within the time limit of my visa.
Someday soon I may get caught and something bad might happen as a result. All the naysayers will gleefully gloat at my expense, but I consider it like hitchhiking: it has worked so well for me for so long, that if something bad were to happen, all the good that came before still makes it worth it.
Right. Um, you’ll visit me in the gulag, won’t you?

What do you think? Good idea? Bad idea? Different approach? Any interesting immigration stories? Don’t be shy about sharing your thoughts.