What do the President of Turkmenistan, “world famous actor” Steven Seagal, and The Dromomaniac have in common? We are all here for the opening ceremony of the Second World Nomad Games! It’s all very heady stuff. I’m here reporting—I’ve got my press pass and everything—and typing away Hemingway style: shouting at underlings, swearing profusely, drinking to excess, scandalizing local women, and insisting that everyone calls me “Papa.”
I love the press release announcing Steven Seagal’s arrival. If you are truly world famous, do you need to say so? Does anyone say, “World Famous Actor Robert DeNiro?” No. Maybe they are on to something, though. For the purposes of this event, from now on I am World Famous Blogger, Kent Foster. Already I have had people look me up and down, see my Samsung Galaxy S4 (a hopelessly out-of-fashion smartphone) with the cracked screen and wonder what I am doing here.

I am ensconced at the Ayan Resort in Cholpon Ata, the word “resort” being used very loosely. I think “resort” in this part of the world means “we put a fence around it.”
Getting here was an adventure. The police are out in full fierce force. I can’t remember the last time I have seen so many military and police in one place. (The President of Kyrgyzstan is coming to hang out, too.) We had a police escort for the 4-hour drive east, and the entire way there were police on the side of the road raising their batons at attention. This will be the first and last time I will manage to pass through busy Bishkek without stopping. 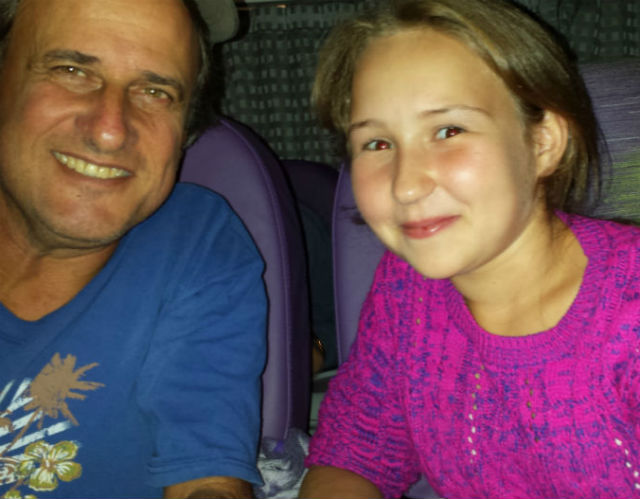 I flew from Vladivostok to Bishkek via Novosibirsk on S7 Airlines for $275, which doesn’t have me dancing on table tops, but in Vlad you are not rich with choices. However, for some reason S7 put me in business class for the first leg with a 12-year-old girl flying alone, to our collective astonishment.
Look how adorable she is. She screwed up the courage to try and speak English with me, and we became fast friends. I ordered cherry juice, and she did the same. I ordered fish and rice; she did the same. When I got out my sudoku booklet, she got out hers. When I proposed a selfie, she showed me how to share it via Bluetooth to her phone, and then she cropped herself out and made my face her phone wallpaper. I was kind of hoping the plane would crash with us being the only survivors so I would have to adopt her, and then I remembered that her family was waiting for her at the airport. 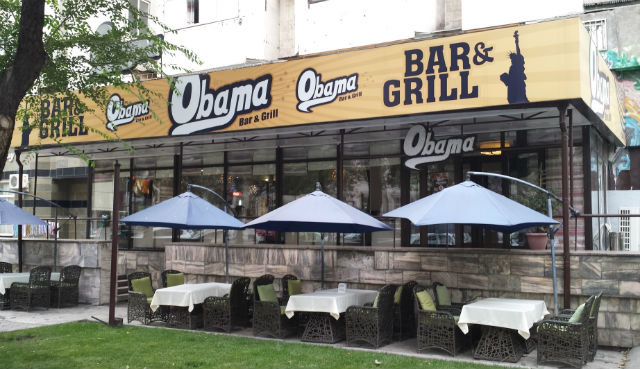 Three years ago I thought the Obama Bar and Grill was a novelty, but they have doubled down and moved to a more upscale location.

This is my second time in Kyrgyzstan. The first was three years ago. I wrote several award-losing blog posts about my triumphant visit, starting with this one about my favorite place in Kyrgyzstan, the retro roller skating rink.
Kyrgyzstan might be on edge a titch. The World Nomad Games is a big international event, 53 countries participating (“country” also being very loosely defined; Chelyabinsk Oblast in Russia is a country?) which comes a few days after Independence Day, which came two days after a suicide bomber drove into a barricade at the Chinese Embassy here in town. He was my favorite kind of suicide bomber, the kind who manages to kill only himself. Well done. Encore! 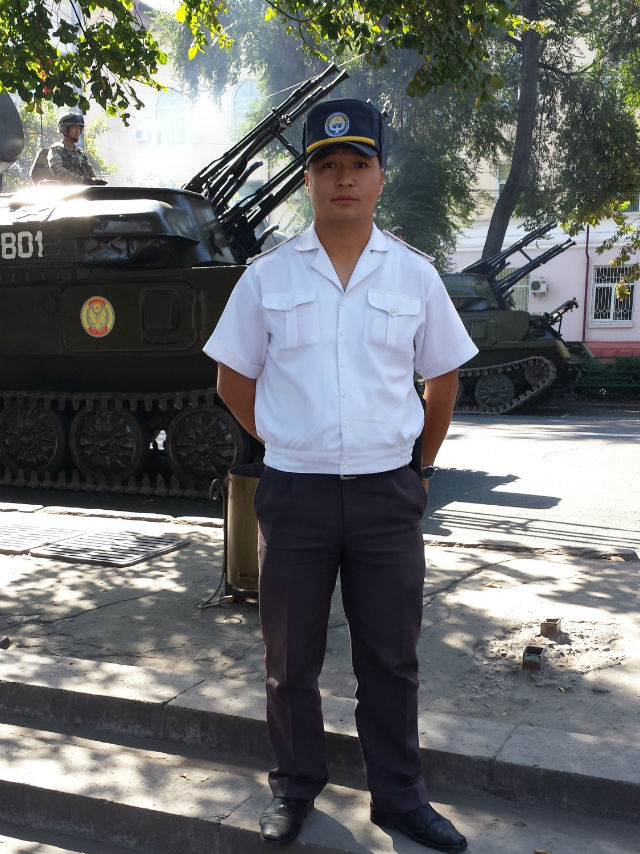 I arrived in Kyrgyzstan on it’s 25th anniversary of independence and raced downtown to watch the military parade. One of the policemen guarding the route tried to make small talk with me. He encouraged me to take a photo of him and he kept saying, “What’s up?” which flummoxed me until I realized he was saying, “Whatsapp.” He wanted me to send him my photos. We chatted until his supervisor came by and scolded him for not paying attention.

Coming from Russia it’s funny to see young couples kissing and hugging in Bishkek. You almost never see public displays of affection in Russia. Russia is curiously conservative, but here in this ostensibly Muslim country, people just gotta smooch. (The other extreme is Hungary. In any city park, by the time you finish a sandwich you have witnessed half a dozen babies being conceived.)
I envy the Kyrgyz boys. Kyrgyz women are very striking. Very. I love the neither-here-nor-there moon-faced look, the mix of ethnicities on every face. I don’t have the chutzpah to run up to every woman and ask for a photo to show you proof, but with my press pass and my honest journalistic intent…we’ll see.
The women are stunning while the men are humdrum. I recognize this, and then I wondered if there is any country in the world where the men are considered to be more handsome than the women are beautiful, and I can’t think of one. Italy? Nah. See? We men have it tough.

A last-minute photo addition of a “colleague” who is half-Kazakh, half Russian, so maybe a half-moon face?

PRACTICAL INFORMATION:
I’m heavy on Instagram only because it is quick, if you want to follow along with photos and short videos.
My friend, Stephen Lioy took great shots at the last World Nomad Games as you can see here on his website.
Why don’t you stay with me? You can follow along with RSS, subscribe to an email feed, see what’s cooking on Facebook, pray that I’ll say something witty on Twitter, check for a non-boring photo on Instagram, and if you are really slumming it, there’s always Google+.