Never been to Kyrgyzstan. Never been anywhere near Kyrgyzstan. (The other giant blank spot on the map for me is West Africa.) The hassle and cost of visas for the ‘stans have always put me off, but then the confluence of two events made the decision easy: Kyrgyzstan decided to go visa-free and Pegasus Airlines decided to start flying here for crazy-cheap. From lots of places in Europe you can fly here via Istanbul for about 400 euros round trip, all-in. I flew 215 euros one-way from Germany. Pegasus also lets you check in one bag for free; the only thing one could quibble about is the high cost of food and drink on board, but both of Istanbul’s airports are far worse.
My Plan B for getting out of Europe was to fly from Oslo or Stockholm to Bangkok for about 200 euros one way plus 30 euros to check in a bag on norwegian.com. That’s an amazing deal for mid-summer. 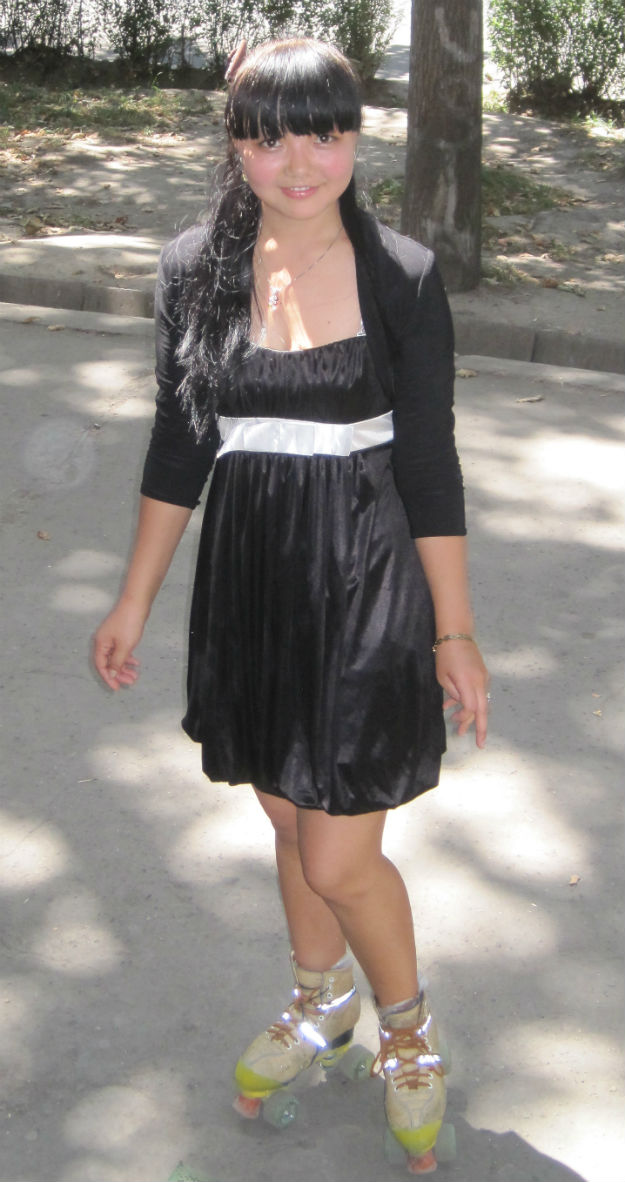 How is this for a face? Many Kyrgyz women are very striking. Roller girl here is outside of a roller skating rink in the center of town. It’s an atmospheric time capsule, the kind of place that will be the first to go when Bishkek modernizes, unfortunately. 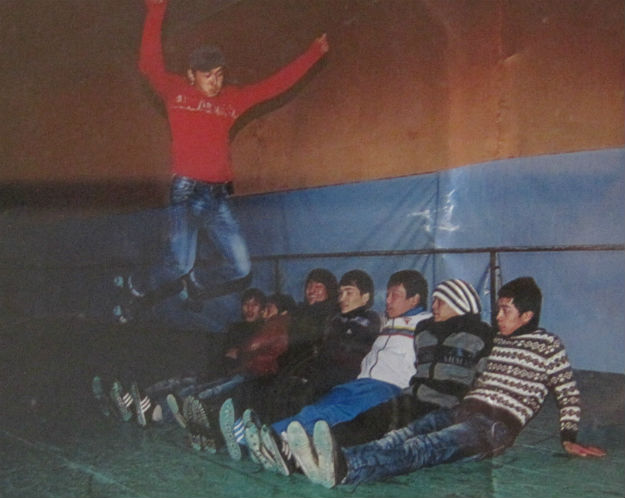 This is a photo of a photo from the roller rink. It doesn’t look like it will be a successful jump, does it? The guy on the end has reason to be nervous.

I stayed my first night in a supremely derelict apartment transformed into accommodation for travelers called Bishkek Guest House. Two helpful, pious Muslims who put up with travelers eating in front of them during Ramadan (not that there’s any other place to eat in the guest house), welcomed me, but I started wondering where the main cross beam was so I could hang myself. Thankfully, Stephen of Monk Bought Lunch fame and Makiko of giant sushi eating fame invited me to stay in their apartment. I was happy to accept; a Canadian had been robbed in the elevator going up to the hostel a few days before. (I met Stephen through my website in Nepal. I am happy to meet anyone; in person you’ll be able to witness how tired I am.) 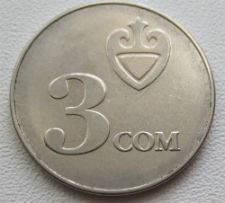 At first, second and third glances the capital, Bishkek, looks very rundown. Most of the city can be accurately described as a decrepit, unkempt shambles. Has any landscaping been done since the Brezhnev era? I’m used to this, though. If I may name-drop, it isn’t so different from Tiraspol, Odessa, or Bucharest, and inexplicably, such fallowness grows on me; not everything has to look cookie-cutter perfect like a suburban San Diego housing estate.
For a city of nearly a million, downtown Bishkek is very calm and quiet aside from some inbreds who honk their horn too much. Thankfully, car ownership is low. The main drag, Chuy Street, is almost quaint. The abundance of trees provide a spell of relief from the brutal heat. (Trees make all the difference. Name a horrible place that has a lot of trees. You can’t.) The heat is relentless. Days are often around 35C (97F) and in the middle of the night it doesn’t get below 20C (70F). My limbs are already an unnatural shade of burnt red.
With Bishkek’s nightlife, cultural events, and great nature nearby, I can see the attraction for foreigners. As one extremely loud American put it, “Everyone is either staying longer than they thought or planning to move back!!” Anecdotally, it seems true, but I had to take two steps back in embarrassment. (Do I come off like that? Am I so loud? I can’t be. Can I? I might be. I need to tone it down—until I go to China, and then I’m speaking Chinese full bore like it’s meant to be spoken. Now I just need to learn Chinese.) 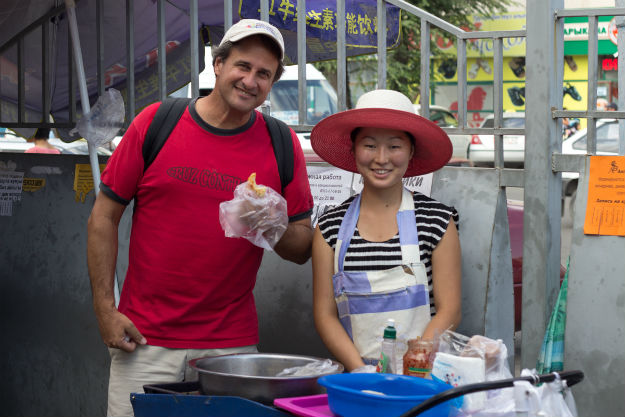 Eating a samsa (something like a big samosa, 15 som, about 30 US cents) in the Osh Bazaar on the west side of town. Photo by Stephen Lioy. Copyright Stephen Lioy. Trademark Stephen Lioy. All rights reserved. Anyone unlawfully using this photo without proper written consent in triplicate can expect a major, major whipping. 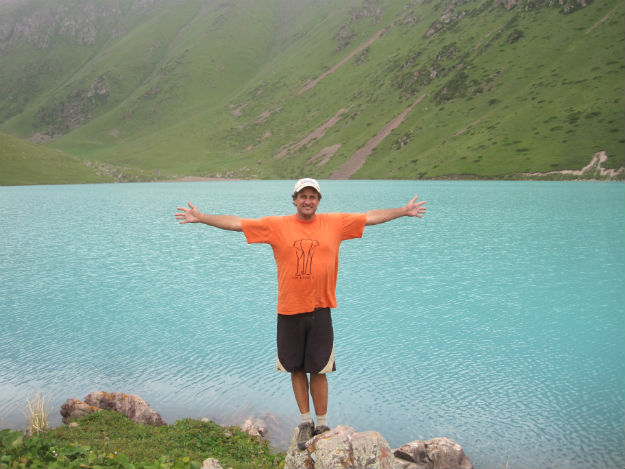 The Trekking Union of Kyrgyzstan, one of several interesting organizations here that make travel easy, offered a day-hike to Kel Tor Lake about 90km to the southeast. For 360 som ($7.25) there was round-trip transport to the beginning of the trail which was otherwise not accessible by public transport and a guide who spoke a little English. (En route we happened to pass Tokmok, a town east of Bishkek where the two Boston Marathon bombers grew up.) The hike was 2.5 hours and 1000 meters up to the lake, the payoff being the amazing color of the water due to its mineral content. 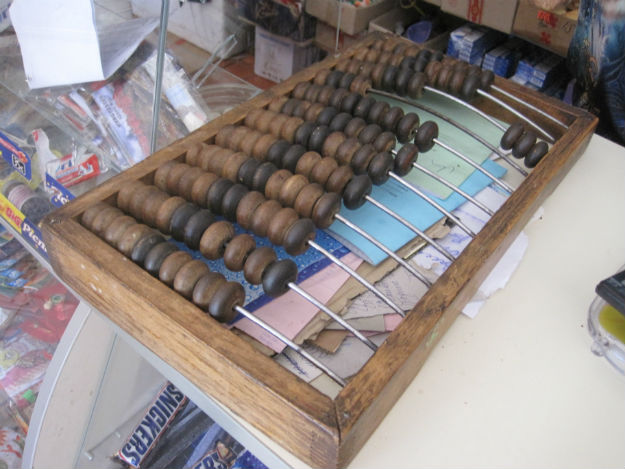 I cringed when I saw this. I had flashbacks to traveling in Russia and Ukraine years ago when abacuses (abacii?) were common. I’d gather some things, bring them to the counter, and the babuschka would whiz the wooden caroms back and forth to tally everything. When she was done, she would then lean on one hand and glare at me, waiting for me to pay. I’d helplessly ask, “Skolko”? (How much?) Without fail she would give a priceless wave over the abacus and a look that said, “Don’t you have eyes, Stupid?!”
Maybe antipathy towards clueless foreigners has changed in Russia these days. It has to be. Here it’s been a pleasant surprise to see how friendly and patient everyone is even though my Russian hasn’t improved.

PRACTICAL INFORMATION
Many people come to Kyrgyzstan as part of a big, ugly overland tour through the ‘stans, especially on the Pamir Highway from Tajikistan, but there isn’t public transport and it is an expensive and difficult journey to organize. I heard of two travelers who, when faced with this dilemma, simply bought an old Lada, drove it to Bishkek, and sold it. Easy. Plus, it’s safe to say that driving that route would be the experience of a lifetime.
Why don’t you stay with me? You can follow along with RSS, subscribe to an email feed, see what’s cooking on Facebook, pray that I’ll say something worth remembering on Twitter and if you are really slumming it, there’s always Google+.