Practical information
Normally I dispense (what I hope is) practical information at the end, but I sense this money-saving tip is something either you care immensely about or not at all with nothing in between, irrespective of how expensive Denmark is. (And make no mistake, Denmark is painfully expensive with one of the highest food prices of anywhere in the world.)

Anyway, one of the best travel secrets I have is this: you can go for free on the ferry between Hirtshals, northern Denmark and a few places in Norway by hustling a ride from a car waiting in the harbor parking lot. I have done this a few times. Cars pay to go on the ferry regardless of the number of passengers, so go 30-60 minutes before the departure and ask any of the cars in the queue to drive on to the ferry. It is quick and easy. All you do is ride with them on to the ship. It takes five minutes max. (There is also this Danish rideshare website.)
In my mind, this is why you travel light, why everything you own fits into one backpack, a light-enough bag you can be mobile with to take advantage of these opportunities. However, people don’t travel this way much anymore. At the risk of sounding old, this kind of information would have been hungrily devoured 10 or 20 years ago, but backpackers and backpacking are changing. Low-to-the-ground backpackers are an endangered species. What I just suggested sounds akin to scuzzy panhandling for many people. However, if I invented an iPhone app that puts travelers in touch with drivers who have space in their cars and charged 5 or 10 euros with no face-to-face interaction, everyone would be on board with that, right? Travel is evolving. 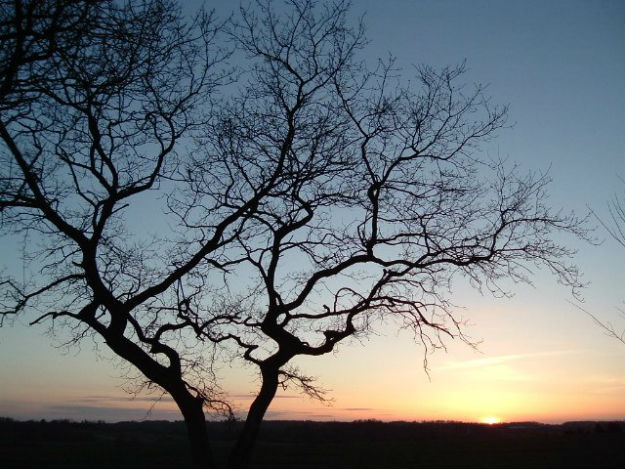 One of these days I might lay out the case that I am one of the most-traveled people in the world, super-heavyweight division, but I only mention it to say that from allllllll my running around, I think the five foreign countries I have spent the most time in are Hungary, Denmark, Japan, Malaysia, and I don’t know the fifth, but it would be Russia if the visa wasn’t such a hassle—not because of this photo. I have probably visited Denmark 15-20 times. I can even speak the mushmouth language commonly known as Danish. Denmark isn’t obviously beautiful like Norway, another place I have a ton of memories from, some of them even good, but it grows on you, it seeps into your soul, particularly the people.
Wait, how about some Danish pop music to get us in the mood. I can recommend “Special” by Mew and “Rotator” from Dizzy Miss Lizzy. (The songs are OK, the videos are awful.)
(Pssst! Want to know the worst band of all time which also happens to be Danish? It’s Michael Learns to Rock. If you don’t believe me, just try and sit through this song below. I dare you. No, really, go ahead, I can wait. I was tortured by a whole CD of it once while hitchhiking in Indonesia. I’m still in intensive therapy.)

To show how much I like Denmark, brace yourself for some heavy praise: if I had a gun to my head and was forced to marry a random woman from any country—my version of a shotgun wedding—I would choose Denmark. I don’t know if you can go wrong marrying a Dane; just ask all my ex-wives. Besides being easy on the eyes, a typical Danish woman is relaxed, down-to-earth, open-minded, artistic, pragmatic, tolerant, and without hangups.
Likewise, if I had to force someone at gunpoint to raise my illegitimate kids, it would be a Dane before anyone else. The parenting seems extremely permissive, but somehow it works; they grow up very well-adjusted and well-rounded. They’re solid people. You often see them on the road and yet do you ever meet freaky Danish nutjobs? Never.

The Danish language is fantastic, totally underrated. Quick: go find a Dane and ask him/her to say these three words: Bo (a name), bov (forest), and bog (book). You will immediately get into an argument when you claim they are repeating the same thing three times. Any word that has a “d”, “v” or “g” in it, but doesn’t begin with those letters, is high comedy.
Fellow Scandinavians sneer at Danish as some barbaric version of Norwegian spoken with hot potatoes in their mouths, but I find it very expressive. It can also be hard on the lungs, as Danes make a funny, quick inhaling sound when they agree with something. The first few times you witness it you think they are in the inital stage of a heart attack.

I went to a Danish high school graduation ceremony, not thinking to bring my camera. Has there ever been an interesting high school graduation ceremony? No. I made a speech at my own graduation and I wouldn’t recommend it to anyone. (Damn right that was a humblebrag.)
What a mistake. First of all, a room full of Danish high school seniors looks like a casting call for a movie: tall, lean blondes with lustrous hair and sturdy, handsome guys with a refreshing lack of attitude. Danes come from good stock, I’m telling you.
After the diplomas were handed out and everyone sat down, five skinny guys got up and went to the back of the auditorium to a band setup. How quaint, I thought, they are probably going to play a traditional Danish song. I was not expecting an eight to ten-minute rendition of “Seven Nation Army” by the White Stripes, a version something between reggae and rock. It blew me away. In what other country would you see that? If they had played “School’s Out” by Alice Cooper, my head would have exploded. 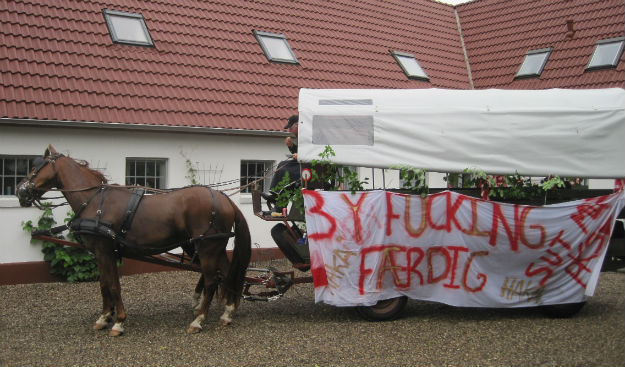 After the graduation ceremony groups of students piled into horses and carriages to visit everyone’s families for drinking and eating. They put special, heartfelt messages on bed sheets on the sides of the wagon. (“Fucking finished”) 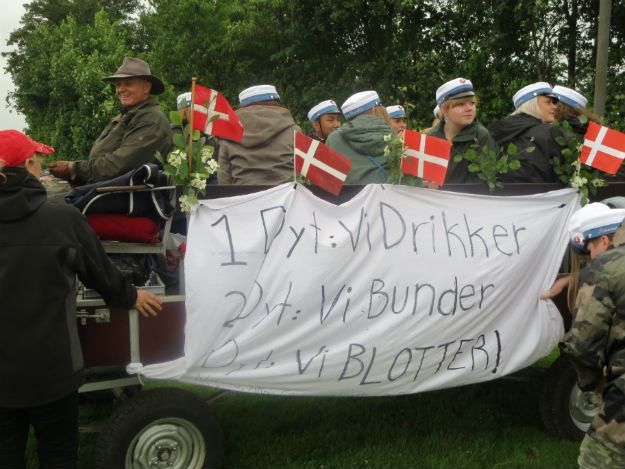 Danish TV is something to behold. You notice the difference from American TV right away during the commercials when they promote upcoming shows. In America, it is either over-the-top fire and brimstone to get your blood pressure rising or it starts slow and restrained, portending some imagined doom, building to a crescendo: “Tonight, on an all-new NCIS Peoria, violent heroin addicts are getting ready to take over downtown!!!”
In Denmark, it’s all warm and fuzzy, like listening to someone’s lovable uncle. Every channel sounds like it has the same soothing voice from the same imagined man: large, chubby, big beard, chain smoker, comfy in an over-sized sweater as he calmly, slowly intones what is coming.
The TV news is a breath of fresh air with the anchormen in their regular street clothes and a three-day stubble, looking like they woke up 10 minutes before and didn’t have time to get themselves together. Also, unlike in America, there is no dubbing on news reports. If Putin is speaking, he is speaking in Russian with subtitles. I like that.
The entire society is progressive beyond anything I am used to. There are no big money politics. You don’t need to be rich to aspire to be in public office. I know a guy, a former school teacher, who has held three ministerial posts in the government. The present Health Minister is a 30 year old woman. Even as it concerns something as mundane as shopping, Denmark, unlike most countries in northern Europe, has finally allowed the supermarkets to be open on Sundays, which has been the bane of my travel existence for years. Nothing had been more depressing than being in Scandinavia on a Saturday afternoon and realizing everything was closed until Monday morning. 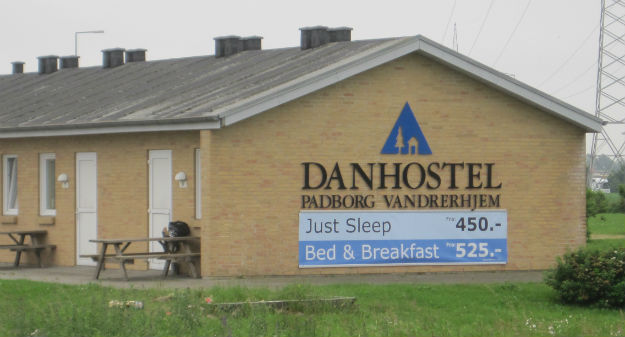 This youth hostel in a miserable location by the highway in the middle of nowhere epitomizes pricey at 450 kroner ($77) for a bed.

Hitchhiking out of Denmark
The good news is that I hitchhiked 1000km (620 miles) to southern Germany. The bad news is that it took 17 hours. Near sunset I got stuck outside of Leipzig which was only halfway, but in the clutches of desperation and defeat, a nice guy in a speedy 1997 Porsche 911 saved me.
Some people say you haven’t lived until you ride in a car going 250kmh (155mph), the driver with one hand on the wheel and the other fishing for greasy french fries in his McDonald’s bag. I might be one of those people, it was that exhilirating. He asked me as a point of reference what the fastest I have been in a car is, and I guessed it was 260kmh (160mph). For my benefit, after asking if I was OK with speed, he made it up to 280kmh (175mph). In an old Porsche at that speed, the windows feel like they are going to shatter and the rushing wind makes it too loud to speak. It was wild to be blowing by cars like they were pylons, and yet two cars passed us—though not exactly at that speed. Germans are in a hurry! Here is some shaky video: 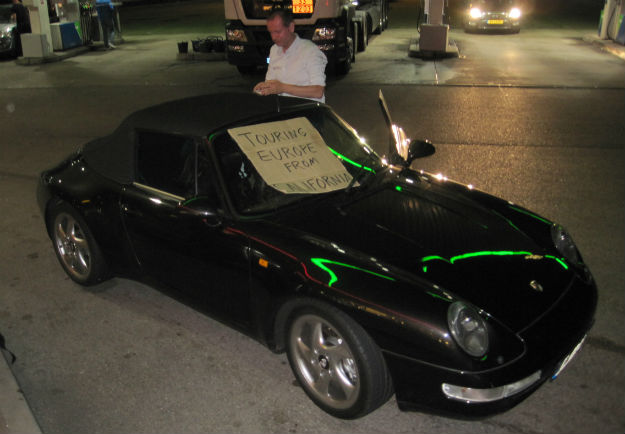 Saying goodbye to my driver outside Nurnberg at 12:30am, about to go into scuzzy panhandling mode to get the next ride.

It isn’t my favorite thing to hustle rides in the middle of the night at highway gas station rest areas, but I have done this many times and am used to it, unfortunately. It took me half an hour of chatting up people before I found a Croatian guy who readily took me. Just after we were on our way, he asked, “Do you believe in God?” Oh boy. I hesitated, and he rephrased the question: “Since you were able to get a ride with me this late at night, can you believe in God for the next hour?”
Yes! Yes, I do!