Are you tired of my hitchhiking stories? Is it the equivalent of baby photos, only your own are interesting? OK, I’ll make it short. Besides, I might be losing my hitchhiking touch. It’s getting harder and harder even though for mysterious reasons women pick me up more often these days. (If you are keen about the philosophy of hitchhiking and why it is the greatest invention ever, I blather on about it here.) Is it worth mentioning that I was hitchhiking with over $1000 in cash only if I was robbed of it all? No? OK, let’s get to it. (Attention future drivers: I keep my money in my left pocket.) 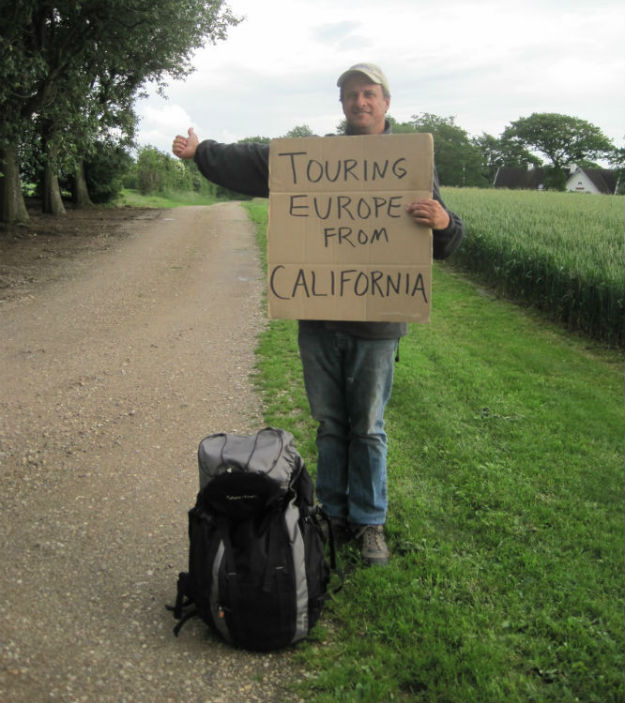 Would you pick up this man? Me neither.

A tough hitchhiking route I have done several times is Holland to Denmark, so I broke out my go-to sign. I still needed 13 rides in 13 hours, which isn’t something to crow about, though the last four drivers were women. One had never picked up a hitchhiker, but said I looked “sympathetic”. Maybe she said “pathetic”. The 13th driver, a saint who saved me in a big way in northern Germany, was a pretty, blonde Hungarian woman who works for a California company. The sign made all the difference.
If I tell someone I had 13 rides to go from A to B, they groan, assuming it would be better to have only a few rides. I don’t mind. I don’t mind telling my life story to drivers 13 times, even if I have to struggle to do so in different languages. It’s a very small price to pay to get a free ride. Some travelers get tired of this perceived invasion of privacy (“Where are you going? What are you doing?”) and make up stories, conjuring up a Walter Mitty-esque, today-I’m-telling-everyone-I’m-an-astronaut narrative. I never do because I can’t remember the lie, I’m not good at lying anyway and I think everyone would see right through it. (My driver’s license says I weigh 187 lbs (87kg); I’m such a hypocrite.) 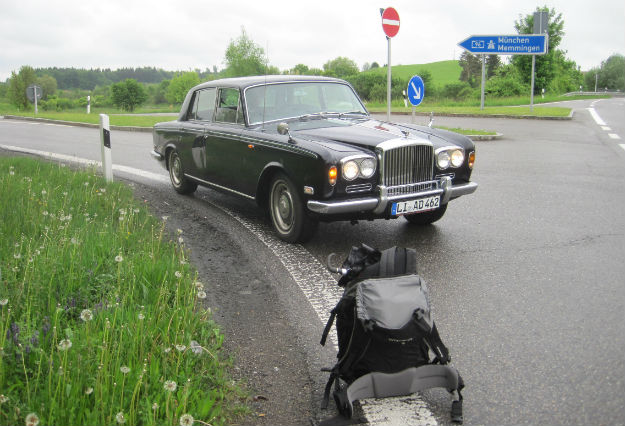 “Jeeves, fetch the Bentley. I shall troll for hitchhikers.”

Another route I’ve done many times, Zurich to Budapest, also went in fits and starts. The last two times were hellish and I slept in a truck stop in Austria—coming AND going. Rough. I wrote about the brutal details here.
I hadn’t been standing long at the highway rest area outside of Zurich before the Swiss police swooped in, brusquely suggesting that the place I chose wasn’t safe. (There is no point in arguing with all the police who deal with me on the roadside, but I make sure to only speak English and do plenty of “Yes, Sir”s with some faint bowing.) I was told to move. A woman who had witnessed this from afar asked where I was going, then gave me a ride to Germany.
The rest of the way was typical hitchhiking stuff. This 1971 Bentley above took me next, my first ever Bentley. It was like riding in a boat. No suspension. Every turn I thought the car was going to fold on its tires. Then a girl with bright, long, orange dreadlocks and her child took me, then an enormous Mercedes, then a young dude. 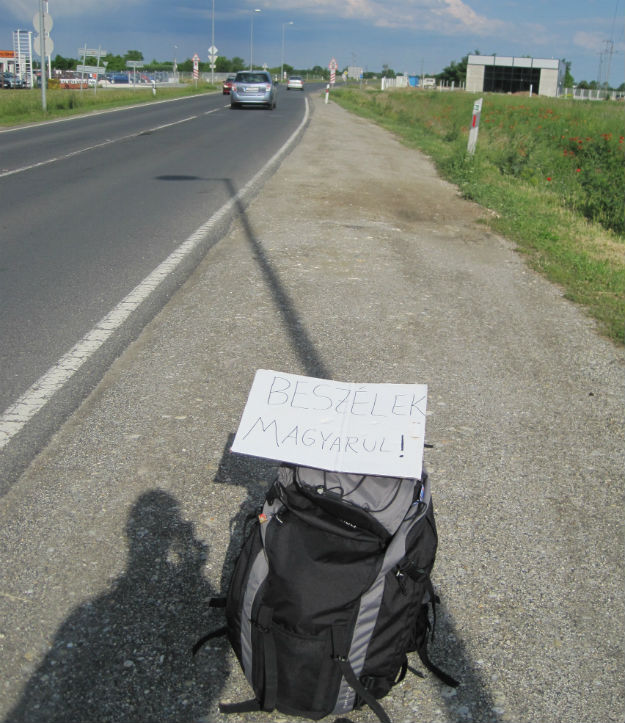 Since it was tougher than normal to go from Bavaria to Vienna, to go onward to Hungary I thought it might be a clever idea to have a “BESZELEK MAGYARUL” (“I speak Hungarian”) sign. I eventually got into Hungary, but I had no other signs, so I used it again. It made no sense and only caused people to look at me like I was an idiot.

Near Vienna a fierce gust grabbed the American flag that was velcroed to my backpack and blew it far away, leaving me naked. I almost always have my USA flag on my backpack when I hitchhike (and never otherwise). It shows I’m a traveler. It attracts positive attention 99% of the time. Americans as a whole do not travel this way, which makes me an attractive oddity, and if someone wants to vent about America being the global policeman, that’s fine with me. The discussion is always civil, except for the one time when an Iraqi picked me up in Germany and yelled, “Scheiss Amerikaner!”, but even then he said it with a smile.
Predictably, I got stuck and with true American conceit I felt that the lack of a flag—my lack of an identity—was keeping me from getting picked up. (“If they only knew I was American!”) It was a struggle to get to Budapest, so much so that I took an 11 euro Hungarian rideshare to go back to Vienna. (In Budapest I went to my favorite horse salami place in the main market only to discover that horse is only one of several meats they do now. When will this Western Europeanization of Hungary end? Very upsetting.) 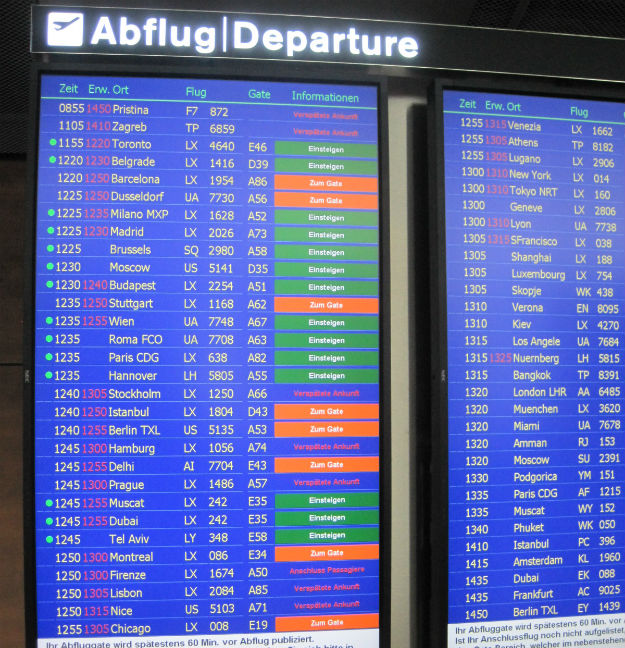 Zurich airport. Look at that: 50 flights scheduled in a 60-minute time span, 12:20-13:20, which is impossible. I don’t get how they are allowed to schedule it like that, in Switzerland no less. 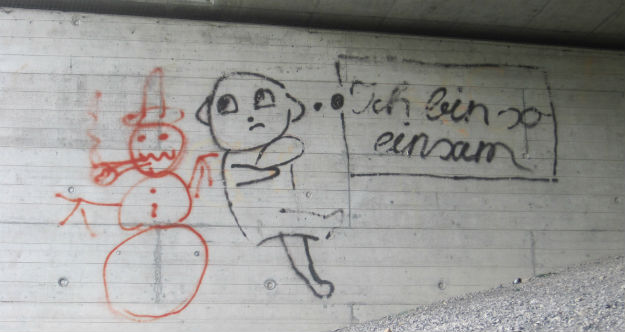 Someone came and ruined my favorite graffiti next to the airport! Jackass. I hate humanity. “Ich bin so einsam” = “I am so lonely”. 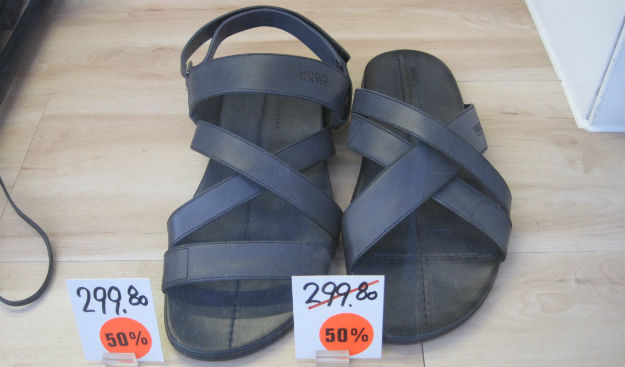 50% off of 300 Swiss francs (US$315!) for these ridiculous sandals? That’s a discount? Please. Some things about Switzerland I’m not going to miss.

Practical Information:
My hitchhiking preparation always consists of checking out Hitchwiki for places to start and reviewing Google Maps, even if I have done the route many times before. You would be surprised how often there is miscommunication or drivers saying one thing and doing another so it’s good to know alternative routes.
If hitchhiking just isn’t your thing, this is the best (cheapest) way to travel around Germany: MeinFernbus (only in German, unfortunately). Super-cheap bus fares, wifi on board, and electrical outlets that are supposed to work. I was impressed. They also go to neighboring places like Zurich, Luxembourg and Strasbourg. Check out their route map.
Hey, there are some of you out there who receive my blog posts via RSS. Some of you might be in a panic that Google Reader is kaput as of July 1. I don’t have a recommendation for you, but some wise people have recommended Feedly as an alternative.
My next blog post should be about Denmark—a very underrated country—and why it is always a good idea to marry a Dane, among other things.
Why don’t you stay with me? You can follow along with RSS somehow, subscribe to an email feed, see what’s cooking on Facebook, pray that I’ll say something worth remembering on Twitter and if you are really slumming it, there’s always Google+.