I’ve got something to say about this trip. It’s really no big deal to travel in Russia as I did. The visa is the hard part, and then any jackass—no offense, Ryan Lochte—can buy train and bus tickets. Hitchhiking has risk, of course, but that’s just my thing. Russia has an abundance of hostels, Airbnb, couchsurfing, and cheap hotels like most other other countries and plenty of buses, trains and Blablacar rides like most other countries. Communication is a problem, but not frustratingly so (Google Translate is your friend, maybe your BFF) and certainly not a legitimate reason to avoid coming. Give Russia a chance.
I might experience Russia in a vacuum. I’ve seen an idyllic Russia. My experiences are different from others I’ve meet and the stories I’ve read. I’m not going to dwell on it. 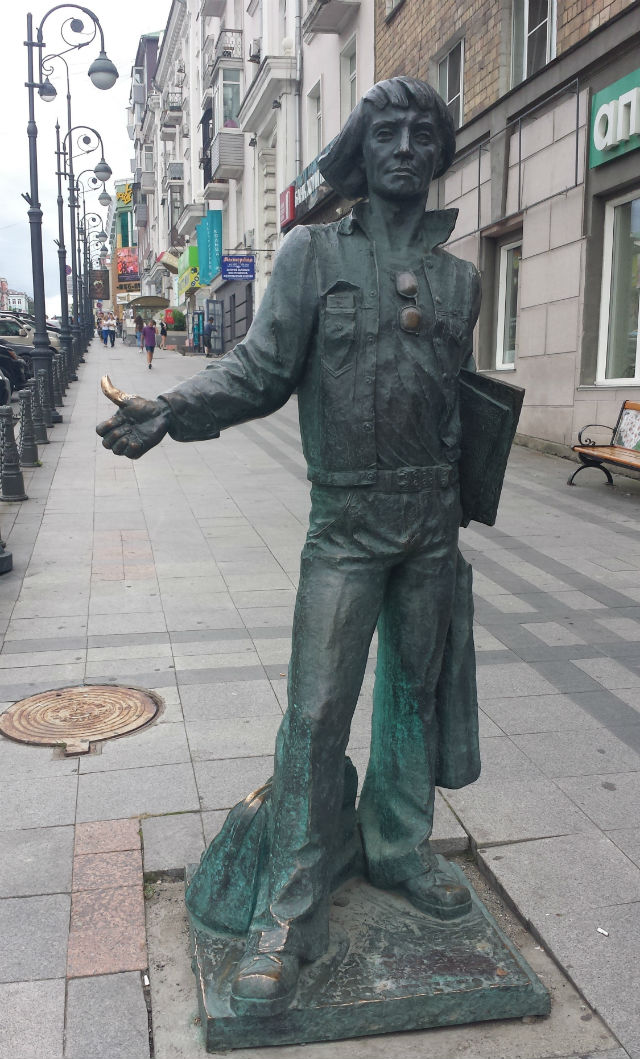 A statue of a hitchhiker? That’s all I need to see: Vladivostok is my favorite town in Russia! There, I said it. Rub the thumb for good luck.

I created a public trip on Couchsurfing to see if anyone would host me, but instead a Serbian girl getting her Masters here wrote to ask if I’d like to meet in town. When Saturday came around and the weather was good, she proposed we hike to a beach she had heard about. It was the ultimate in fortuitous timing, as we went to a cape I hadn’t known about and doubtful I would have tried to have go to on my own anyway as there were no signs. It was the prettiest place I have seen in all of Russia: Cape Tobizina.
We took a bus to the end of the line, then I told her in a moment of bluster that we could hitchhike to the trailhead, which we did quickly and easily, to her and my surprise, then we hiked in for 3 or 4 kilometers. I took this 36-second panoramic video from one of the best vantage points. (Link is here if you can’t see below.)

A quick thing about this: where else in life is a girl half my age inviting me to the beach for the day? She was interested in the amount of traveling I had done, but still. Couchsurfing acts as the conduit, but that kind of engaging spirit is impressive and not easily found these days. Big fan of Serbia all of the sudden. 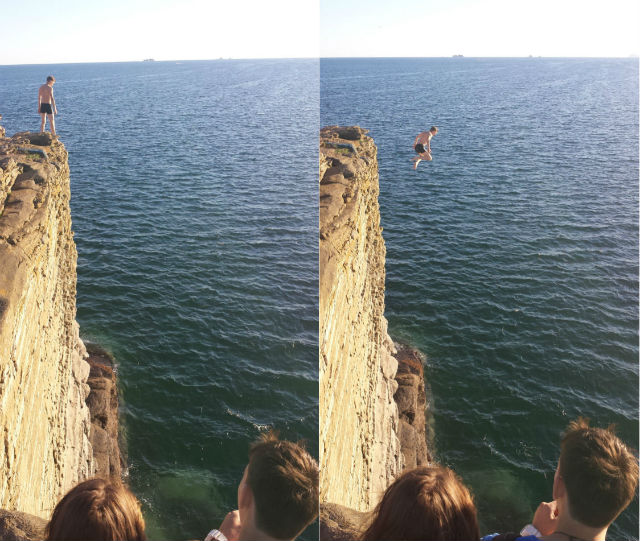 “The Cliff Jumpers of Tobizina” is a pretty good movie title. They are pretty brave. I learned all kinds of Russian profanities when they emerged from the water.

Cape Tobizina. I thought this was pretty, but then I kept going… 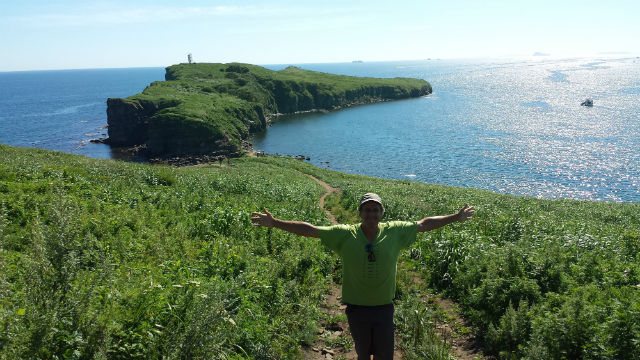 Had to do my Christ the Redeemer pose for this view. 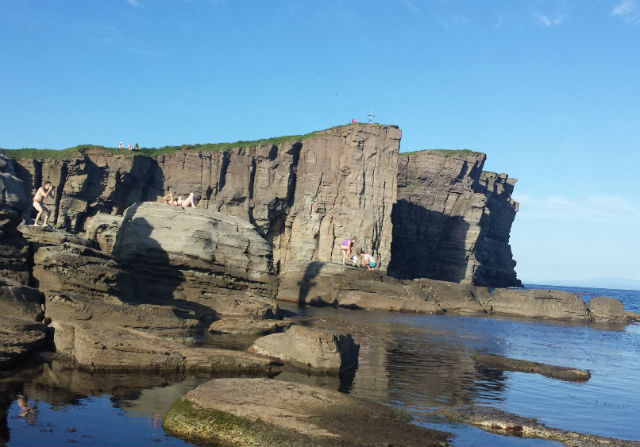 Can you see the guy on the left taking pictures of his girl on the big slab of rock? Russian women LOVE posing. It’s a national obsession, more than sprinkling dill on all food. 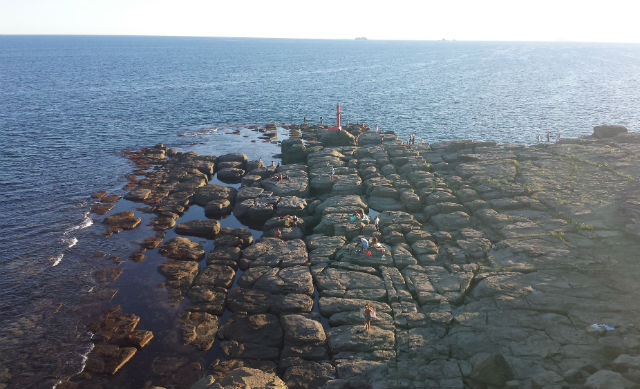 We laid on these bird-crap-streaked rocks and watched paddleboarders come around the bend, cliff divers leap into the Sea of Japan, and women contort themselves in various positions. It was bliss. The weather hasn’t been the same before or since. 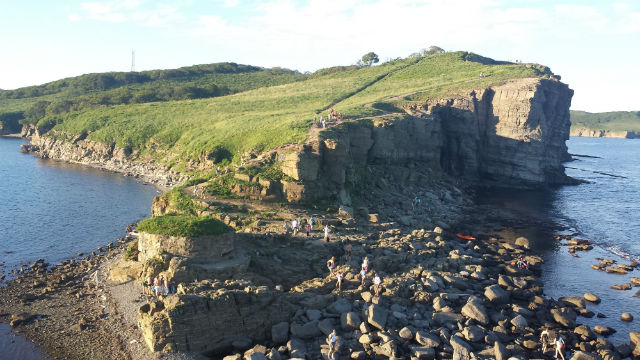 Late in the day the greens get a little washed out, but it was vibrant! Have you noticed I don’t use filters or alter my photos? Maybe I should.
There must be some great little hidden inlets and quiet beaches dotted around the Vladivostok region judging from the map. Some people have whispered that the area south towards North Korea is picturesque, and then what about that North Korea coast? If that ever opens up… 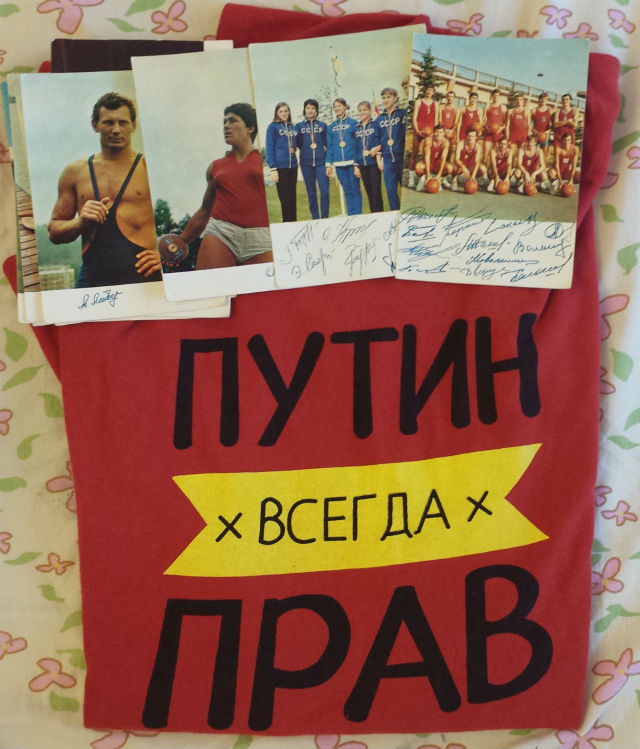 This is what I got at the Vladivostok flea market: a t-shirt that says, “PUTIN IS ALWAYS RIGHT” and some sports postcards from the 1970s, the holy grail the one on the top right of the 1972 Olympic gold medal basketball team, which is a very sore subject for Americans as we were fleeced in the final. Fleeced! 200 rubles ($3) for everything here.
I don’t know if wearing the t-shirt in public is a good idea or not. It’s telling that few Russians want to talk American politics, as it would easily lead to talking about Russian politics, which no one wants (dares?) to discuss openly.

Two new bridges in Vladivostok have reinvigorated the town, I read. You can see warships on the left side. Vladivostok was of such strategic importance that it was a closed city to foreigners from 1958-1991. Putin is coming in a few days for an economic conference, and the town is being spruced up.
I’ve always wanted to come to Vladivostok ever since my first time in Russia in 1996 when I heard about a 3-day music festival called “VladiRockStock.” It has an enticing location on the map, hemmed in by China and North Korea. Solid name, too, and great translation of that name which is “To rule the East”. 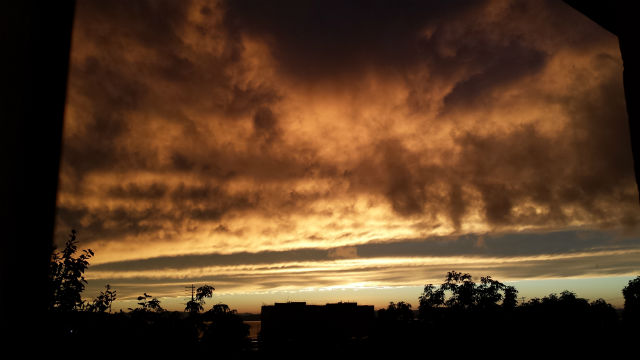 Vladivostok sunset after a storm.

PRACTICAL INFORMATION:
There’s a Whatsapp English-speaking group called “Vladivostok English” that gets together every Sunday at 5pm at Travelers Coffee in town. My Airbnb host brought me. It’s always a good idea to attend such meetings to meet new people. Always.
Tomorrow I fly to Bishkek, Kyrgyzstan for the World Nomad Games. My friend, Stephen, took amazing photos from the last one two years ago. My plan is to visit Kyrgyzstan and Kazakhstan and then go back to western Russia before escaping the cold weather altogether.
It’s a good thing I am going to a backwater like Bishkek (via Novosibirsk). Otherwise, in summer you can get stuck here. Flights can be cheapish to South Korea, but boats aren’t cheap to Korea or Japan and you can’t fly to so many places from Vladivostok.
This is my route in Russia if you can’t see the map below. 12,500km (7700 miles).