Andrew, Iris and I went took a van north to Arcabuco to catch a bus to San Gil.   I lent sunburnt Iris my hat, but she lost it almost immediately. I had been around the world once or twice with that hat.   She felt bad.   She asked, “Was that a special hat?”
It wasn’t, but I remembered a Woody Allen standup line I had to use. “Well”, I began with a heavy heart, slowly, “In fact, my father, on his deathbed, sold me that hat.”

At a restaurant in Arcobuco we had a protracted negotiation with two buses that had stopped for lunch to get to San Gil.   We knew the price shouldn’t be more than 20,000 pesos (US$11), but they pressed for 30,000.   Both parties went into disinterested mode, but when zero hour came and they were about to pull away, they tried for 25, we held up two fingers, and we got our price.

We sat in the back and I saw the driver’s assistant insert a DVD into the player.   I feared the worst: three hours of a loud slasher movie, but it turned out to be Shawshank Redemption.

I thought there might be some lingering residual resentment at the way our negotiation went when I saw the assistant come lumbering down the aisle with some intent to me in the back.   He looked just like Pablo Escobar, but with a more benevolent face.   He asked with a touch of urgency, “Are you from the United States?”
I said yes, and tried to tell where the other two were from, but he cut me off.   As an American I held the answer to a mystery that had been gnawing at him.   “What is Dr. Pepper?”, he asked.
Dr. Pepper?!   After trying to say that it wasn’t a person, but it may have been initially–how do you explain Dr. Pepper in Spanish, anyway?–I finally said it was like a less-sweet Coca-Cola, which seemed to appease his curiosity.

And let me say to all those who are grievously pained whenever people from the United States call themselves “Americans” which is seen as a bright shining example of our hegemony:   everyone else calls us Americans.   South Africans should start calling themselves Africans and see if it sticks.

Below, some Colombian hostel toilet humor: 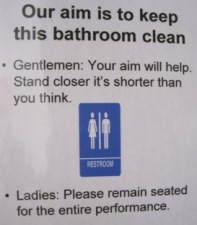