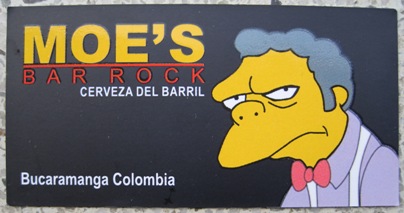 I didn’t manage to see this bar open, but I guess Easter morning was a bad time to try.

There’s a guy from Chicago here at the hostel and I really hesitate to say anything unkind about him as he’s very nice and personable, but he will not SHUT UP!   He talks and talks and talks loudly without end.   I knew his life story the first time I talked—no, listened to him.   He’s here to woo a local girl, and the poor thing, what she must put up with.   Again, he’s a nice guy, means no harm, but he makes me insane and I avoid him strenuously. If I have to stay one more night in this hostel I will go rope shopping tomorrow and hang myself.     Just my luck I’d probably accidentally buy bungy cord.

I don’t know how anyone can sleep in a hostel.   This one is typical.   There’s construction next door, mosquitoes buzzing around your head all night, the bed is too short and too concave, but the other guys in my room sleep soundly.   Maybe it’s because they’re drunk.

Another guy here told me that he stayed in La Via Candelaria hostel in Bogota until one morning when the owner told everyone they had 24 hours to leave.   He had rented it out to a large group.   Surely he had arranged this far in advance, but he told everyone at the last minute so he could make the most money.   It didn’t go over well as it was just before Easter and most of the people had been staying for weeks or months.