Not many people know this, but “Paris” is a French word that means “city without coin payphones.”   (Silence)   No? Nothing? Anybody? Hello?
It is just a coincidence that I have some friends that happen to live in this great city called Paris. If they lived in the Fresno of France I would still make a pilgrimage to see them, but this town is an extra bonus.   I won’t bore anyone with my high opinion of Paris.   One day I walked all the way from Place de la Concorde to Porte de la Chapelle to check out the hitchhiking situation (very poor) but it is also an excuse to walk the streets in new neighborhoods. It is the best thing to do.   Paris within the periferique really isn’t a very big city; it feels manageable.   Plus, French girls have a style that is easy on the eye.   I find myself with symptoms of whiplash all over town.

As I need to mention from time to time, some of my friends feel a little funny about me mentioning them in my blog for my vast, vast readership, therefore I hardly mention anyone by name.

I slept at my friends’ place in Le Vesinet, a banlieue on the western outskirts, not to be confused with the 93 banlieue–je suis le racaille du neuf-trois!   This couple, they met when they were both about 30 years old, neither had been married before, and it took only six weeks of dating before he proposed.   Eight years and three kids later, they are still going strong.   They just knew.
Of course it’s redundant to say that their kids are adorable, but unique is their four year old son, Matthieu.   Already built like a future in rugby is in store, he has a sharp sense of taste.   Last year I was also here and as a three year old, after a bite of his mother’s cooking, he announced solemnly, “It needs more salt.”
This time he ate a piece of melon and said that it wasn’t as good as yesterday’s melon, which was true as they each came from different sources, but how many kids so young have such an awareness?
When his food was cut into smaller pieces and mixed, he reminded his mother that the mixing was important to have the salt more evenly distributed. 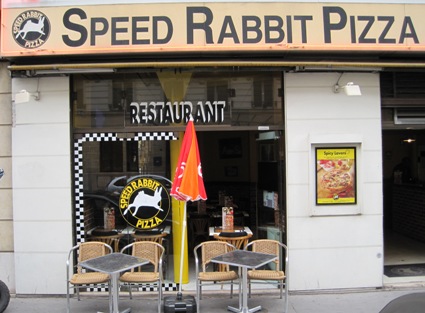 I went into a bar/cafe and asked in French, “Je voudrais avoir l’eau, s’il vous plait” to ask for water, or Imight have said my hovercraft is full of eels, but the snooty man behind the bar looked me over and sniffed, “I sell water!” and filled my bottle only half full.   His pettiness was funny, though I hate to mention it as the other ten times I asked for water I was given it without hesitation and I hate to perpetuate the stereotype of the uppity Frenchman.   It isn’t my experience at all and I’m tired of the French-bashing.
French people do speak English, too, certainly much more than Americans speak French, and if you eat in cheesy tourist restaurants you can be expected to be treated like a head of cattle.   If you dealt with as many tourists as they do, you would be curt as well.

I have what the French call a “Roland-Garros” tan, named after the French Open tennis venue, which is what you get when you wear shirts and shorts all the time, a version of an American “farmers tan”.   I was in town for the final.   I stayed only 10km away from the stadium and while everyone on TV looked comfortably warm and sunning themselves, I was freezing.

I made my regular pilgrimage to Decathlon, an outdoors/sporting goods store that is a big favorite of mine as they sell cool, unique, quality things cheaply.   You can always tell a Frenchman on the road with their Quechua gear, which is the store brand.   Decathlon tried to make a go of it in America, but it never got off the ground. Meanwhile, they have a presence in Hungary and India, of all places.   Here is a link to their website.   If my website was already redesigned and my business acumen was more acute, I would figure out how to get a few pennies for each click.   Alas, no.

I dined with a couple of African friends in a Senegalaise restaurant in Menilmontant.   I am pretty sure it wasn’t a diet meal.   Whenever I see these friends I give them the assignment to find an MP3 or CD of the Congolese song, “L’Union”, by Bisso Na Bisso, one of the greatest ever.

At another memorable meal (on a short visit to Paris it’s such a waste to not eat memorable food) in Bercy Village I ate something sweet called “pain perdu” which means “lost bread”.   The name alone—and my recognizing it—was the only reason I ordered it.

I never got a chance to find a charcuterie that sells a sausage I saw last time called Veritable Jesus.   What a name.   Vive le France!