I was originally going to title this, “I Hate Traveling”.   After 28 hours of airports and airplanes, I was a little punchy after arriving in Amman, Jordan.
I flew San Francisco-Los Angeles-London-Amman for $589 one way on United and bmi, the LAX-London sector a codeshare with no less than 11 other airlines.   I didn’t have to use my fake onward ticket that I had printed out and ready to deceive.
Two quick travel theory notes: I’m not crazy about $589, but I did accrue 8000 Star Alliance frequent flier miles, and Bangkok-Tokyo is only 10,000, or a domestic one-way regional USA ticket can be 7500, so that does have value. I might have been able to fly for about $560 on another carrier that wasn’t affiliated with a major alliance, but the $30 savings aren’t worth it.
I showed considerable restraint in refraining from grabbing the microphone at the check-in counter to lecture the 17 people on the waiting list to upgrade to business class that upgrading is always a waste of money and/or miles and never a good idea, as I explain on the bottom of this page.   It’s the kinder, gentler me.
Two more tangents: I saw two well-done movies on the plane: “The Social Network” and “Scott Pilgrim Vs. The World”.   The weak ending of “Pilgrim” didn’t sully the rest of it, of which the first 15 minutes are a cinematic tour de force and blew me away.   The name “Knives Chau” still kills me.
I always say that if you take a long intercontinental flight, go look in the bathroom mirror just before arrival, that is what you will look like in 5 years. Tack on a second intercontinental flight and make it 10. I don’t see myself aging well.

If the Jordanians think that visitors find the tourist police soothing, they have miscalculated.

A Palestinian guy on the airport bus to town warned me, “All taxi drivers are thieves!”, and then smiled pleasantly as I was dropped off into a throng of taxi drivers in a quiet part of Amman. At midnight. I employed my only bargaining tactic, which is walking away at their first offer, and I found a guy willing to get into his car and come to me.   It doesn’t sound like much of a concession in the realm of haggling, but in my experience is. I wasn’t so soothed, though, when he left me in another quiet place downtown and vaguely motioned that the Farah Hotel was just up a narrow street that he couldn’t drive to. I was alone on this poorly lit and eerie side street, wondering what I had gotten myself into, but then saw three other travelers and followed them to freedom.
The Farah Hotel looked more promising than the Cliff that I wrote about last week, but I got no hot water until the morning, a cold dorm room with an uncomfortable bed, less than clean sheets, a squeaky bunk bed frame and a snorer below me. As I tossed and turned and suffered, I could only scheme to find an imam the next day to issue a fatwa on the death of the snorer.
I get some emails and comments asking me about the loneliness and trepidation of traveling alone, and I always say that if you are alone it is easier to meet people to go for a meal or do daytrips, and this is where it can be great to stay at a hostel. At breakfast I got an offer to join a group of five other solo travelers to the famed ruin city of Jerash. I am glad I accepted. It was a great way for me to get reacquainted with Jordan, pick up some travel tips, and meet new and interesting people. Easy.
Also consider that I am in my 40’s. When I was a traveler in my 20’s I looked down on older travelers like me, and yet here these kind young punks let me join them. One day together and now we are all best friends forever—even if we don’t know each others’ names.   Plus, the snorer below me is a great guy from Portland who runs an eBay business and is graciously letting me pester him about. I am even leaning towards calling off the fatwa.
Jerash is one of the great cities of ancient Rome, a large area of ruins 50km northeast of Amman. Costs $11.50 to enter, which made me pause—in my first 24 hours in Jordan I spent $75, including the $30 visa. Ouch!—but it was quite impressive. 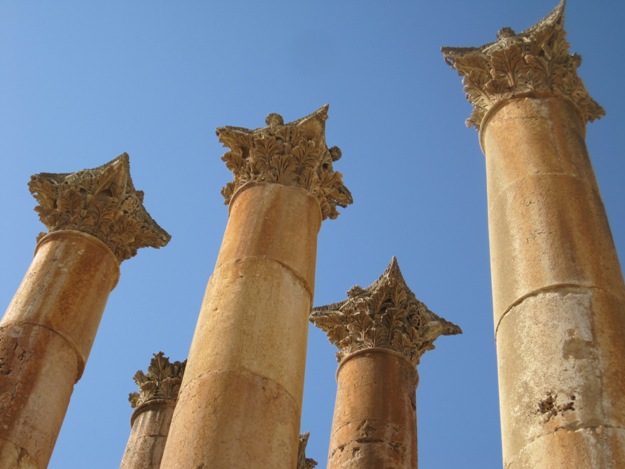 We went a further 20km away to Ajloun to inspect its formidable fort against the Crusades. I guessed that it was built in the 1980’s, but it turned out to be the 12th century.
Last thing: in the hostel I met an Indonesian(!) getting her physics PhD(!!) in Berlin(!!!) named Ponky Ivo(!!!!) Ponky Ivo!!!!!   You don’t meet people named Ponky Ivo by staying at home, and if that isn’t reason enough to travel, I don’t know what is.
I might pay $50 to see a movie starring Ponky Ivo and Knives Chau. 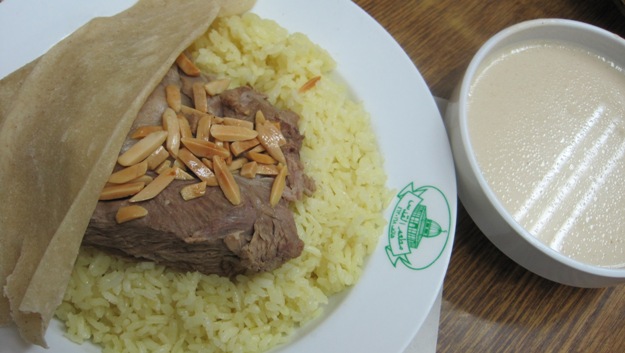 My first dinner of mansaf, lamb and rice with a savory yogurt sauce. $8--a delicious splurge.