I was quickly reminded of the only thing I hate about traveling in Indonesia: traveling in Indonesia. The way bus drivers attack the road makes me berserk. It’s nothing other than pedal to the metal or hard braking. The swerving, the driving on the uneven shoulder at high speeds, the driving on the wrong side of the road if our side has too much traffic—come on, life’s too short for this. We roared past a poor ambulance on an emergency call with its lights flashing and a medic treating a patient in the back. For my sanity I will be doing some hitchhiking.
I’m getting ahead of myself. 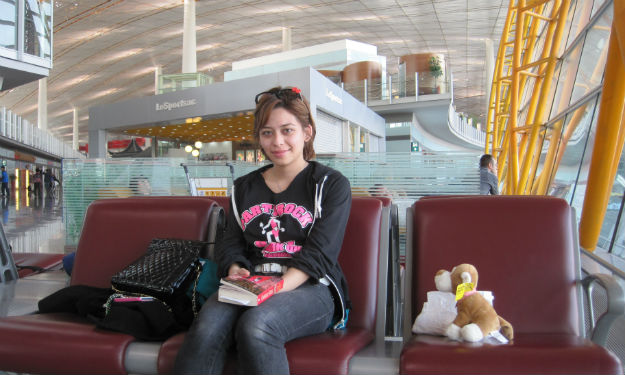 I met this 22-year old Japanese-Brazilian pixie before getting on the plane in Los Angeles. We both had a long stopover in Beijing: 10 hours for me, 12 for her, so we hung out in our deliriously tired states. (I have yet to be on a trans-Pacific flight that wasn’t death-affirming). I showed her how to use the airport wifi, but when I told her that Facebook was blocked in China, she was flummoxed because, you know, Facebook is the internet. I tried to get her interested in TheDromomaniac.com, but it was a tough sell, as it is with everyone else.
Her dream is to go to a community college in Los Angeles. She grew up in Japan and is so much under her father’s thumb at home that curfew is 9pm. She is itching to rebel. She got herself a belly ring, tattoos are being planned, boys have been met.
Our transit terminal was said to be the fifth largest building in the world measured by floor space. (Aircraft hangars, otherwise, are bigger.) The world’s sixth largest floor space would be the shadow under my stomach if I kept eating chips and salsa while at home.
I read a story that in the same amount of time it took Beijing to build the airport from bare ground to completed project, San Francisco made one environmental impact assessment for neighborhood council approval to enlarge its airport. I doubt “environmental impact” is translatable to Chinese. 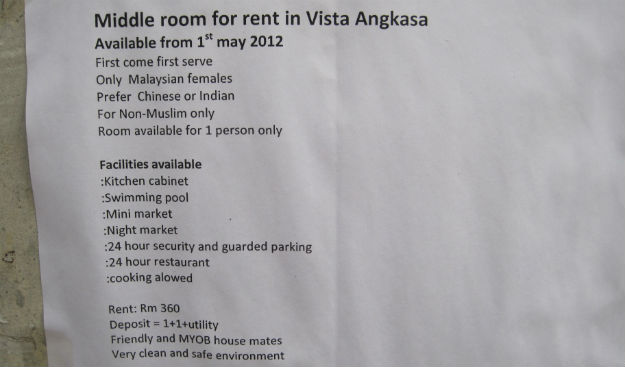 I never get used to seeing these signs, which are very common. MYOB means mind your own business. 360 RM is about $115/mo

For my friends in Kuala Lumpur, an ethnic Indian/christian couple, I have a can’t-miss, free business idea: run around America saying they are persecuted Christians in a hostile muslim country. They could tour the most radical churches where no one knows the difference between Malaysia and Mongolia, and clean up. Rick Santorum’s probably good for a couple hundred dollars.
I read of some enterprising Chinese that did this when they were first able to travel abroad, and that was from an atheist country. This is from a muslim country, so fierce are the sharia laws that they put their theologians on the sides of their airplanes.

I so wish this photo of ex-Prime Minister Mahathir was better.

Speaking of Chinese, another free business idea is to invest in the person who will become the first Chinese Rick Steves, a young backpacker who will capture the imagination of the Chinese and get them to discover other ways to travel. It’s going to happen. I read of a young Chinese girl who went to Taiwan and slipped away from her tour group. (Chinese are only allowed to visit Taiwan on group tours, a very strong admission that traveling opens minds.) She stayed with Taiwanese whom she had met on the internet, a la CouchSurfing, and when she went home and blogged, it was a big sensation. Who knows how many young minds have been stirred by that?
After two days in Kuala Lumpur I flew to Semarang in the middle of Java because it was the cheapest place to fly to, a new-ish route for AirAsia. I think this is my fifth time in Indonesia. Java is the most crowded island in the world. It has about 136 million people and is the size of Florida, meaning it is as if one 40% of all Americans lived in Florida. (My favorite comparison like this is that Bangladesh is the size of Wisconsin and it is as if nearly half of all Americans were crammed into Wisconsin.)
I spent only a night and went to Surabaya, also only for a night, but in just those short hours I was exhilarated to be in Indonesia. I like the big cities where no tourists go. People are excited to see you. There’s a buzz on the street as people even 30 meters away call out to you, “Hello Meesterrr!” It’s the full rock star treatment which is usually genuine and only sometimes like they are poking a stick at a zoo animal. It’s not that I like it because I feel like Mr. Popular, but in these zero-tourist cities where they are so unprepared for tourists, there is no guile, no angling towards a commission or baksheesh, but pure curiosity.
Plus, I have access and see things I rarely see anywhere else. I was chatting with a guy in the market while he was cleaning someone’s eyes with a needle-like contraption that shoots a thin stream of water. He was talking with me and looking at me, while he held this pointed object perilously close to the poor guy’s eye. I’m sure as my time here passes I will have better examples and better photos.
I’ve always thought Indonesians were the second friendliest people on the planet after Filipinos. The difference is that, initially, an Indonesian might give you a hard stare before their smile blossoms whereas in the Philippines they love you at first sight eternally and unconditionally. 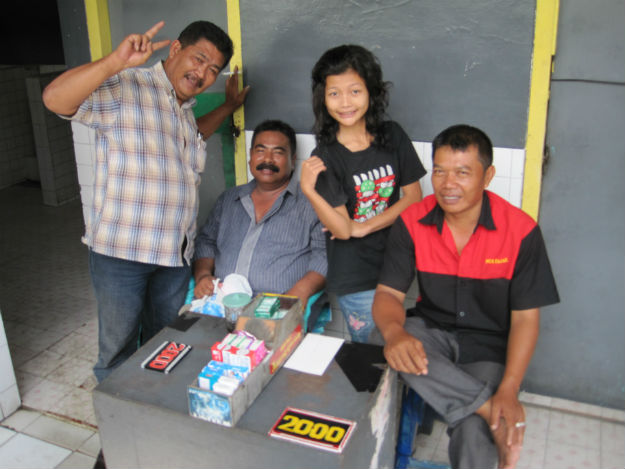 Sorry for the fuzzy photo. I was hanging out by the bathroom in the bus station in Semarang---don't judge---because the girl wanted to take photos with me for her Facebook. She squealed with delight when I agreed. The guy on the far left creepily encouraged me to hold her in my arms for a photo. 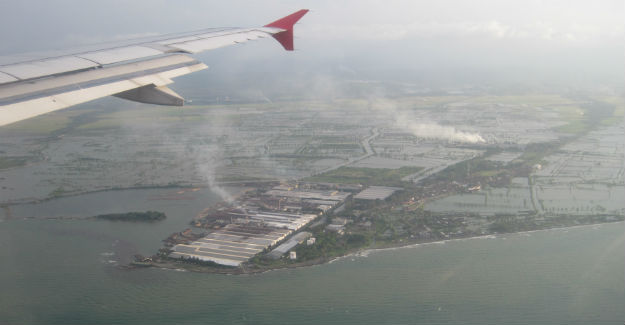 I can't figure out either of these two pix from our descent into Semarang. 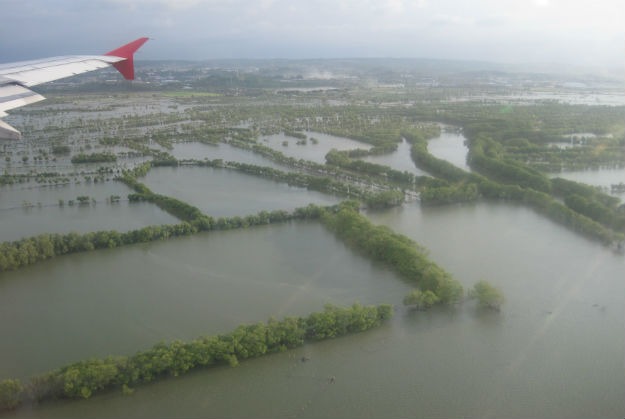 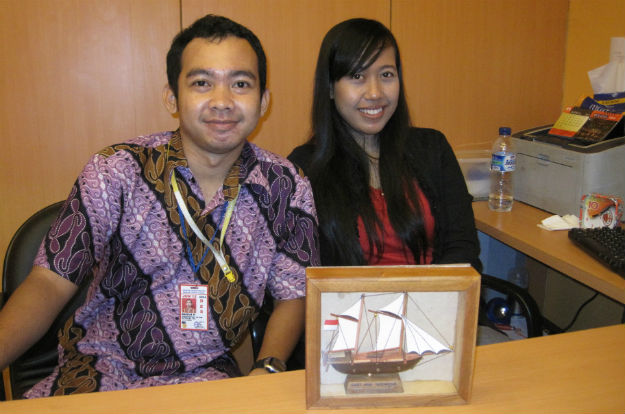 This good-looking twosome are from the Surabaya airport tourist office. They gave me this model ship, a tough thing for a backpacker to carry. 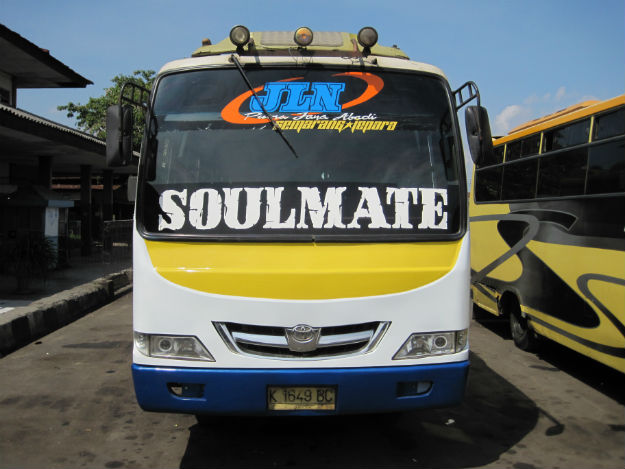