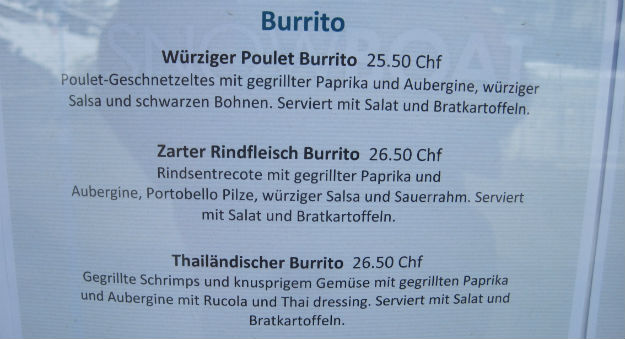 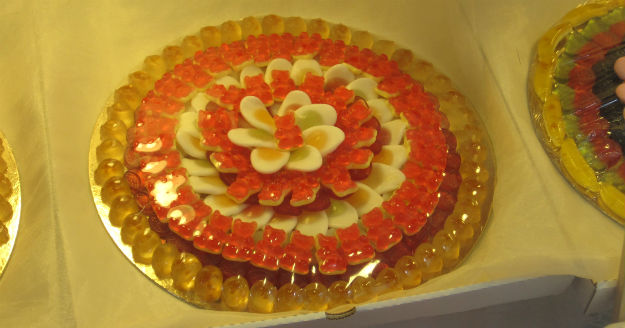 This is my favorite insanely expensive thing in Switzerland out of many, many contenders: gummi bears arranged on a platter. They call this a gummi bear pizza and charge 19.95 francs, or US$21. Four of these cost more than a full-day pass on Zermatt’s mountain trains and ski lifts. Unbelievable.

What can be better than living in beautiful Switzerland? To have a job in Switzerland simply means you are on top of the world. My Mexican friends here pay a woman 33 Swiss francs an hour ($35) to clean their apartment and it wasn’t easy to find somebody. That’s all you need to know about how high wages are. Anyone from a poor, relatively poor or even slightly poorer country (which means everyone else in the world) that has become legal to work here has won the lottery. I would feel that way if I was lucky enough to live here. I’m seriously looking into it, and, in fact, I was introduced to one woman who, after only 30 minutes of having met me, proposed that she would get me permission to work in exchange for making her pregnant with my clean-living genes. Should I do it?
Other than that woman, everyone I know in Switzerland I met outside Switzerland. This is related to the old axiom that if you want to meet Scandinavians, go to Thailand. (I would add: go to a McDonald’s in Thailand.) These are the people I know here:
—a Mexican I met in Russia
—a Georgian I met in the Republic of Georgia
—a Finn I met in Belize (by bizarre coincidence, all three work for the same company now.)
—a German I met in Malaysia
—a Canadian I met in Japan
—a Swiss (I know Swiss people in Switzerland!) I met in India and
—a Swiss I met in Thailand
They are all residents, adding to the multi-kulti mix here. I would guess that people who haven’t been to Switzerland in a while think of its multiculturalism narrowly in terms of its official languages: German, French and Italian. (Yes, I’m ignoring the fourth official language, Romansch, an unserious hybrid spoken by a handful of hillbillies out east). To wit, check out the names of the starting eleven on the Swiss national soccer team:
1  – Diego Benaglio
2  – Stephan Lichtsteiner
5  – Steve Von Bergen
20 – Johan Djourou
13 – Ricardo Rodriguez
7  – Tranquillo Barnetta(!)
11 – Valon Behrami
8  – Gokhan Inler
17 – Mario Gavranovic
23 – Xherdan Shaqiri
10 – Granit Xhaka
That’s a nice representation of who is here. I just had an idea. I’ll make a baby with that woman if we can name the kid Tranquillo. Tranquillo Foster…Tranquillo Foster…nah, it’s probably a bad idea. 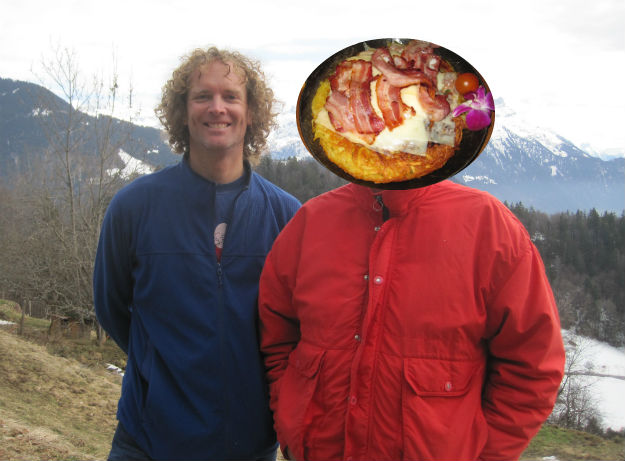 This is me with my friend, Graydon, Master Traveler, in Leysin, and the roesti I ate that night.

Hitchhiking to Zermatt
I hitchhiked from Lausanne to Zermatt shockingly easily and even more surprising, the first five rides were from women. The last woman warned me as she pulled over to let me out that I was entering the inbred part of canton Wallis. It just so happened that we were leaving the French-speaking part of the canton and entering the German-speaking part. I chalked this prejudice up to her being French-speaking, but the next guy who took me, well, I don’t like to say anything unkind to someone gracious enough to pick me up hitchhiking, but his teeth were going a few directions.
The last stretch of road to Zermatt is closed to non-residents (with a 3500 franc ($3700) fine for trespassers—welcome to Zermatt!) Normally you must take a ten-minute train for $8.50 (In India how many hours could you travel for $8.50? 15? 20?) but I successfully hitched it with a Croatian guy, feeling most triumphant.

Zermatt and the Matterhorn!
I’ve been in Switzerland countless times, but never to arguably its most famous place, Zermatt, to see the Matterhorn. I’ve never been in a place like Zermatt. I thought world-famous ski resort towns weren’t for me, but I had an unexpectedly fantastic time. My good fortune started by being lucky enough to stay with a great Couchsurfing host and my expertise helped us come in second place in the pub quiz at Sparky’s. There was excellent weather to go on some scenic walks, and for a long while I sat against a weather-ravaged old barn in the sun by a ski run and watched little kids barely a meter tall expertly ski and snowboard down the mountain.
I got so caught up in the thrill of being in Zermatt I went into the local government office to ask about the possibility of a North American getting a work visa. I went in with both guns blazing, speaking German, showing my newly-shaved face, the irresistible smile, but I was no match for the young girl there who shot me down with evident satisfaction. “Kein Chance!” she said with force, suppressing more overt hatred. I was going to offer to make babies with her to get a work visa, but I had a hunch the proposal wouldn’t be welcomed. Her loss.

This sign strikes me as very Swiss. I should have taken it from farther away as it is in a tunnel in Zermatt and appeared to be unrelated to any danger. It seems to be just a reminder to not come crying to the Swiss for any reason. They don’t have spell-check in Zermatt? Maybe they’d give me a work visa to correct the spelling on English signs before they go to all the trouble of making them. 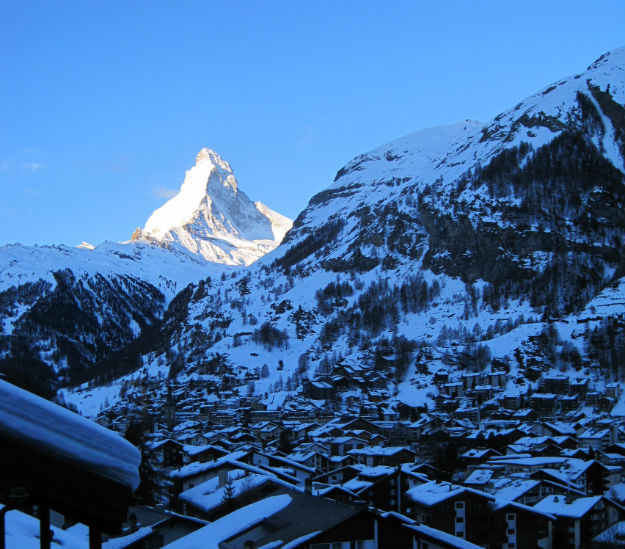 View from my Couchsurfing host’s chalet of Zermatt and the Matterhorn. The only thing better than this is if it were the view from my chalet 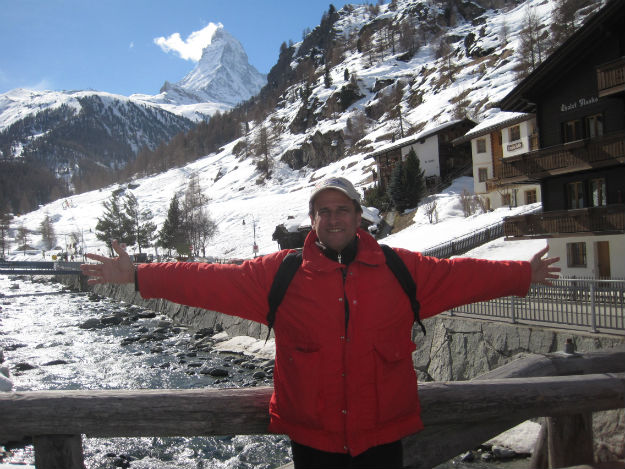 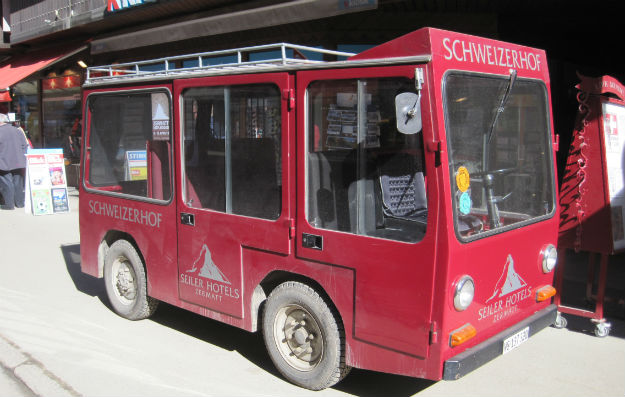 A late entry for most crazy-expensive thing in Switzerland, these electric cars in Zermatt go for $150,000. 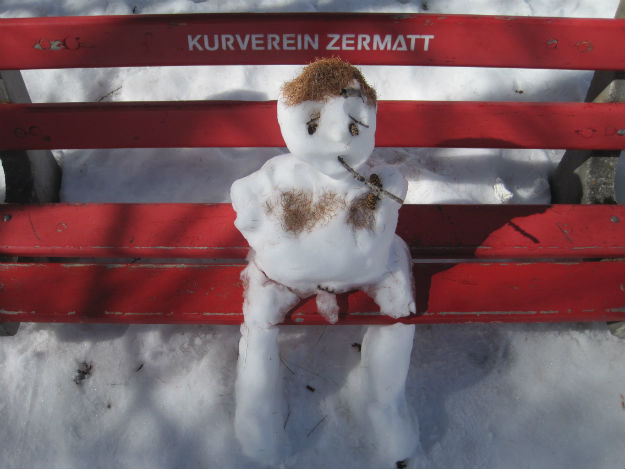 I hitchhiked from Zermatt to Zurich starting out in -10C (14F) frigidity, very happily taking anything that stopped for any distance downhill. It took seven rides, but only one with a woman this time. One ride was from my doppelganger, if I am using the word correctly. (Doppelganger is one of those German words that need 15 English words to explain. I tell German-speaking people that all Americans know the words schadenfreude, gesundheit (from Bugs Bunny), fahrvergnuegen (from a Volkswagen ad campaign) and doppelganger.) The ride was with a guy who left Switzerland when he was 20 and lived abroad for 27 years. He just came back—and he doesn’t like it. The transition’s been too hard. The last two rides were both with Kosovo Albanians, one who lived one block away from my friend in Zurich and drove me straight there. Cha-ching!
I always have a soft spot for hitchhiking in Switzerland because it was here that the most famous person to ever pick me up hitchhiking was: Fernando von Arb, guitarist for 1980’s heavy metal band, Krokus and owner of many engrossing stories. If he had been driving to Sweden I would have gone just to hear more stories. Krokus’ big hit was “Eat the Rich“, an old MTV staple, but he was kind of embarrassed when I mentioned it. Judge for yourself. It’s very pixelated, unfortunately. You only need to watch thirty seconds to get the drift, but the microphone is worth it:

Chance encounters with rock stars aside, traveling in oppressively expensive Switzerland can feel miserable. The most depressing times in my traveling life have been in the horrifically high-cost countries of Switzerland, Norway and Japan. It’s not necessarily the country itself because, ironically, they are in the Top 5 countries I’d retire from traveling, but it’s the heightened feeling that you have less options, particularly when it’s cold.
It’s not as if I am near homelessness. I have money. Rockefeller here is in the five figures these days, but when I go to the bus stop in Zurich to buy a local ticket and it is 4.20 francs ($4.50), I wither. If you live here, you make plenty enough money to enjoy life, and it seems those lucky foreigners shouldn’t be complaining about Swiss strictness or lack of street life or anything else, but for travelers, $4.50 for a bus ticket is downright Oslo-esque.
Norway’s worse because taxes are stratospheric. Here, taxes are low, the Swiss franc is extremely strong—wait, let me dust off my diploma from the University of California at Santa Barbara in Business-Economics before I continue. (My European friends are always surprised to learn that I have a university degree for two reasons: that I sat still for four years to get one and that I don’t use it.) Where was I? Oh—interest rates and inflation are low, and unemployment is 3.1%, which is virtually full employment as anything under 5% means simply that those without jobs don’t want them. The Swiss economy is, if you’ll excuse the heavy jargon used exclusively by us economists, super duper strong, like, top of the food chain, yo! 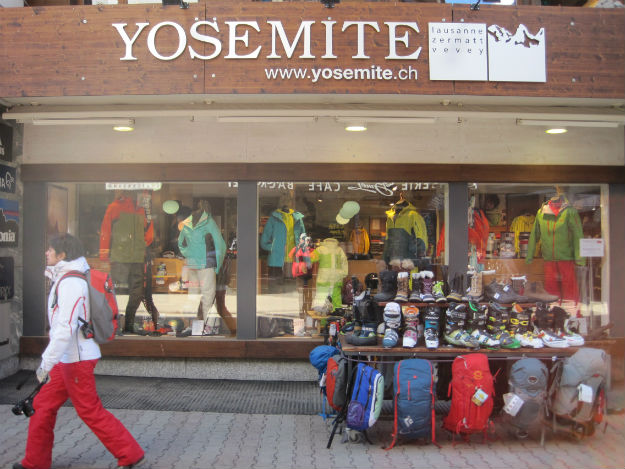 Whoa, whoa, whoa, wait a minute. What’s this all about? You have to drag the holy name of Yosemite to Zermatt? You can’t be proud of your own nature? As a native Californian, I’m outraged, even more than by Thai burritos. 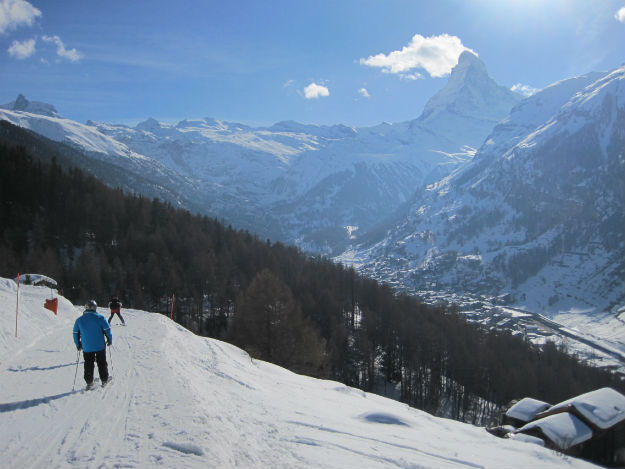 Practical Information
If you aren’t up for hitchhiking in Switzerland and are petrified of train costs, don’t forget rideshare. My old fave, Mitfahrgelegenheit has a Swiss version. For the French-speaking part of Switzerland, a French website is popular, Covoiturage.fr. I used both this time when it was too cold to hitch and they cost less than half the train fare.
Hot news! Zurich airport now has free wifi! I would have paid to see the look on the haughty woman’s face at the airport information desk when they broke the news to her. Last time I came through, I asked if there was free wifi and she gave me a frosty look, leaned back in her chair, crossed her arms, and triumphantly smiled, “Nothing is free in Switzerland!”