I once had a job—no, really, it’s true, but wait, I’m not finished—in Silicon Valley where I gave notice on a Tuesday that I would be quitting in two weeks. Of course my boss was devastated and showed early signs of being suicidal, but as this bombshell news sank in, he asked why I wanted my last day to be on a Tuesday.
Because the World Cup started on a Wednesday.
I’m a huge soccer fan, even though the only World Cup I have ever attended was in USA in 1994. I made enough money selling extra tickets for that World Cup (scalping is such a harsh word) that I could travel for three months. (I had 10+ tickets to USA/Brazil on the 4th of July—cha-ching!—but I also had 10+ tickets for Sweden/Romania, where I lost money and but got smart about it and hustled people in far-away parking lots to buy my $55 tickets for $40. If they had waited until they got closer to the stadium they would have seen that tickets were going for $10.)

The 1984 Summer Olympics final in Los Angeles between France and Brazil.

Yesterday was the 2014 World Cup draw to see who plays whom and where. The where is the under-reported story. Everyone thinks “Brazil!” and assumes that every stadium will be next to the beach, but one venue, Manaus, is deep in the interior on the Amazon, and another, Cuiaba, is way out in the swamps by Bolivia.
I visited Brazil in 2008 for three months; it won me over instantly even though I found it a profoundly lonely place, but that’s neither here nor there. This isn’t the prettiest of my webpages, but hopefully it shows how fantastic Brazil is. Saw four matches in three stadiums in Rio, too.
Hey, I forgot the background music for this post, some obscure early-70s psychedelia: 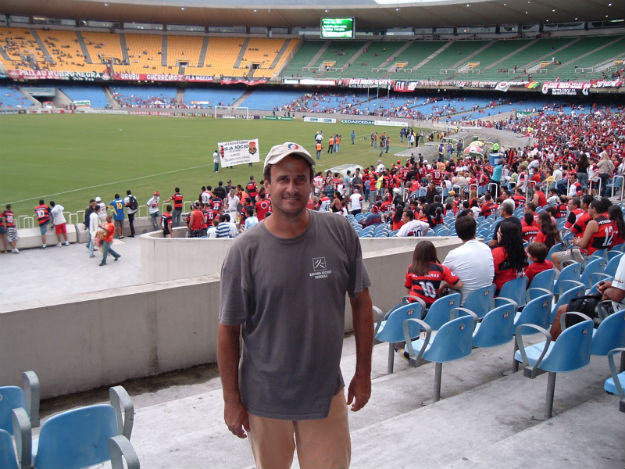 Rio’s Maracana stadium in between renovations. Very sterile, nothing like its glory days.

Five deep, deep thoughts about the World Cup draw:
(1) Idea of the Month: Since USA plays a first round match against Ghana, USA should invite a strong African team such as Zambia to play in Manila, Philippines. It would be a win-win: practice against good competition in tropical heat and have it act as a fundraiser for the victims of Typhoon Haiyan. USA will be playing in some serious heat in Brazil; our warm-up matches should be in similar conditions. Maybe we can play Finland if they can find a sauna big enough there.
(2) It’s absurd that Switzerland is the top seed in their group. Not even the most ardent Swiss supporter on his fifth schnapps would agree with that. Where is FIFA, soccer’s governing body, based? Switzerland. Why? Few other livable countries could handle FIFA’s shenanigans and still grant it tax-free status. I don’t care that Switzerland has a high (FIFA!) world ranking; that stuff is bogus.
(3) Easiest games to get discounted tickets: Nigeria/Bosnia in Cuiaba, Cameroon/Croatia in Manaus and Honduras-Switzerland (only eight million people in each country) also in Manaus. Most tickets have already been sold which means no one knew who would play where until yesterday. There will be a LOT of buying and selling in the coming months.
If you are looking to attend, the cheapest way to get to Brazil is to fly to Bogota, Colombia, fly to Leticia, Colombia down on the Amazon, walk across to Tabatinga, Brazil, then take the boat to Manaus which has cheap flights to Rio and Sao Paulo. If you had to pick one base, consider somewhere near Belo Horizonte in the state of Minas Gerais. Cariocas and Paulistas would roll their eyes at this, but it’s an underrated state with solid people, colonial towns, and hitchhiking isn’t a death wish.
(4) Weirdest big-name match: England vs. Italy in Manaus, the Rumble in the Jungle! This is the only match in the entire tournament that starts at 10pm local time (which means 3am in London and 4am in Rome). All other matches start at 7pm at the latest. Manaus is remote (no road connects it to the rest of Brazil) and hot and steamy to an extreme unfathomable to Englishmen. Imagine all those fair-skinned British fans/hooligans getting blotto and then dying of heatstroke. I’m buying stock in Brazilian hospitals.
(5) Did you see the woman on stage who assisted with the World Cup draw? Let’s just say that the 2022 World Cup in Qatar won’t have the same joie de vivre. (By the way, what if Israel qualifies for that World Cup? Would they be allowed in? Israel’s national team is getting better and better. Imagine if they had to play Iran in a second round match. It would be the heaviest, most watched World Cup game ever.) 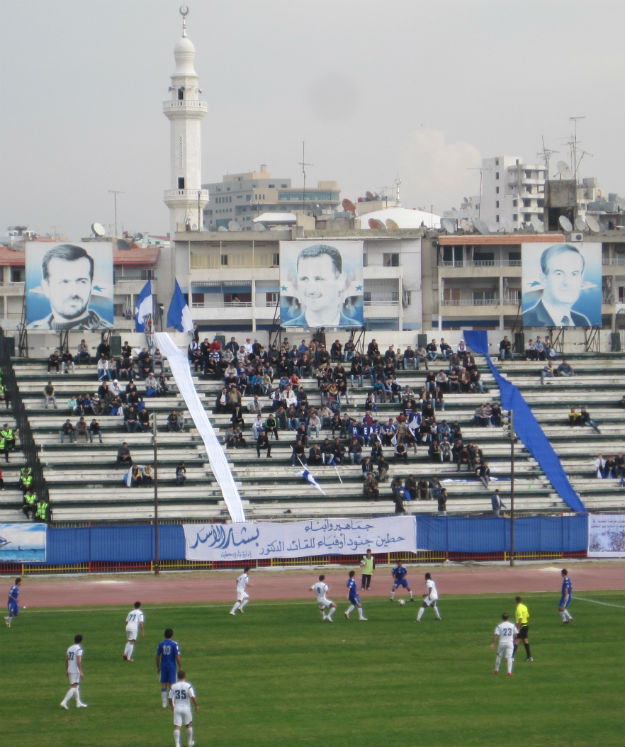 A soccer match in Latakia, Syria, early 2011, a couple of months before it all went to hell. 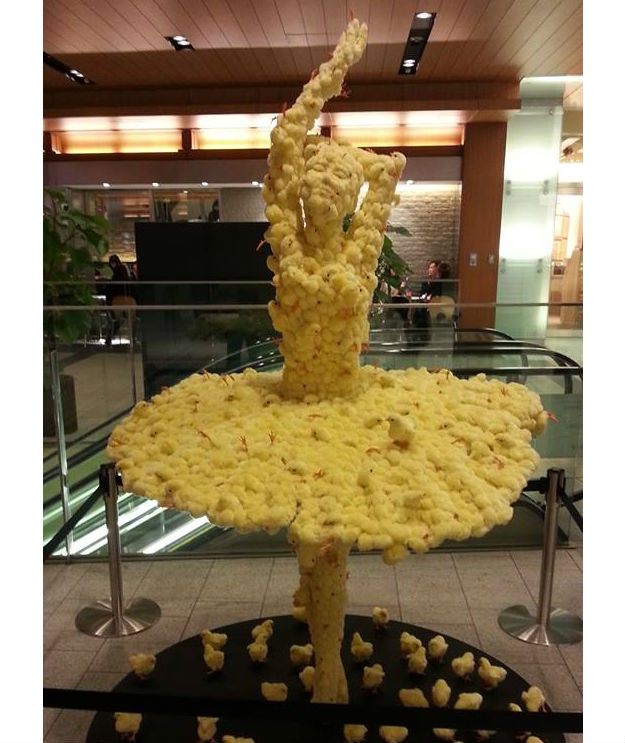 This photo from Japan (I know, it’s redundant to say; of course it’s from Japan) is from Peter Birinszki and is a statue of a ballerina made from small chickens. Japan is in the most wide-open group with Ivory Coast, Colombia, and Greece, but really, it’s just an excuse to show this photo.