I hoped to get through a month in the Philippines without a ferry horror story, but that was irrational thinking. The boat ride from hell turned out to be Odiangan, Tablas to Roxas, Mindoro. A three-hour trip became five in rough seas. What can you do on a flailing boat? You can’t read, it’s too loud to listen to anything, there’s no one to talk to, so you are captive with your thoughts as the horizon disappears and reappears, the boat crashes down, water sprays/leaks/rushes in, and you just wait and wait, powerless. 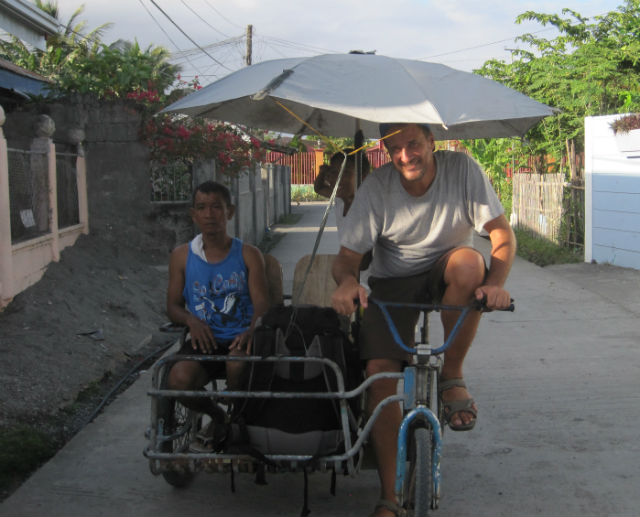 Once in Roxas I just wanted to walk on terra firma, but I came up with a better idea. When a bicycle taxi guy approached, I asked how much to town and he said 15 pesos. I proposed 10 pesos, but I would be the one pedaling, which he quickly agreed to, and everyone in town did a double-take when they saw us. I swear this guy was smiling before and after the photo.

Roxas is yet another of these nondescript Filipino towns that has nothing to offer, but by virtue of its friendly people, has everything to offer, and just hanging out and talking to Deep-Fried Squid Ball Guy, Mango Woman, and Pawn Shop Security Dude was fun. Nonetheless, my visa days were numbered so the next morning, against my better judgement, I took a packed van from Roxas to Calipan City on my way to Puerto Galera on the north side of Mindoro island. At one point nineteen people were crammed in the van, including the rarely seen, passenger-sitting-on-the-left-side-of-the-driver-in-a-left-hand-drive-vehicle maneuver. Then some inbred had his cellphone constantly going off, his message tone was of a child sneezing. What the hell? Who wants to hear that once, much less over and over, loudly?
Fed up with life after that grueling journey, I was determined to hitchhike from Calipan City to Puerto Galera and it was easy. A Belgian/Filipina couple with their child picked me up after a short wait, and I zoomed straight there in high comfort. 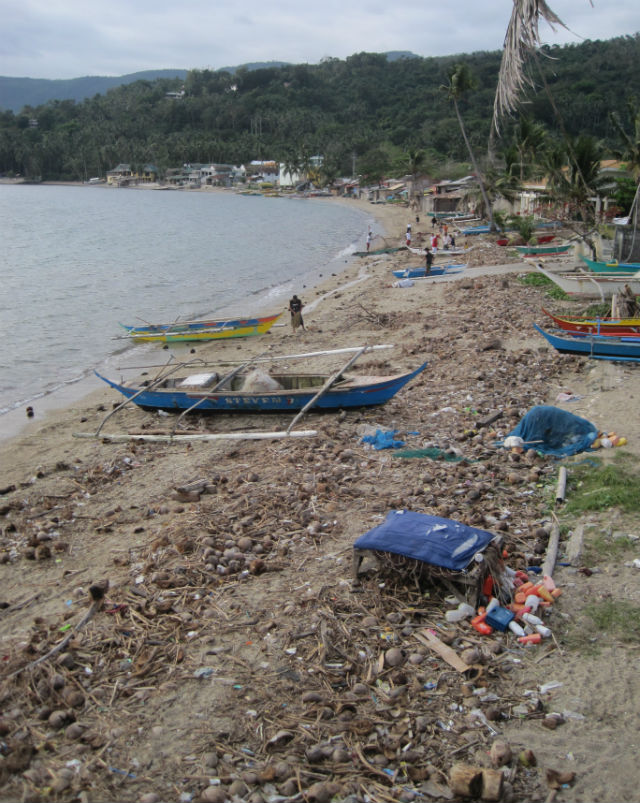 Not exactly the poster for “Welcome to Puerto Galera!” Puerto Galera is the main town. To the northeast is Sabang, an enclave famous among travelers for scuba diving and whoring. To the west is White Beach, popular with Filipinos. It’s probably the closest nice place to Manila, meaning weekends are crowded. 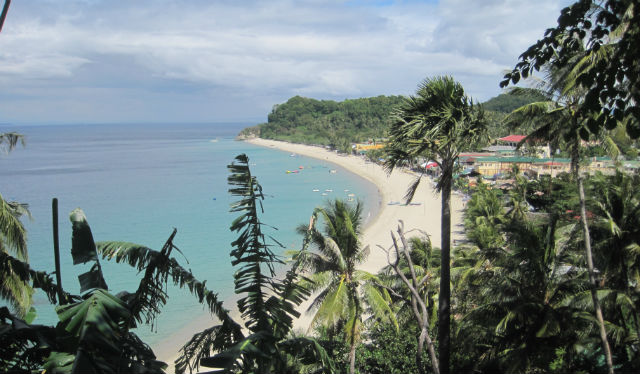 There, that’s better. A view of White Beach from above. 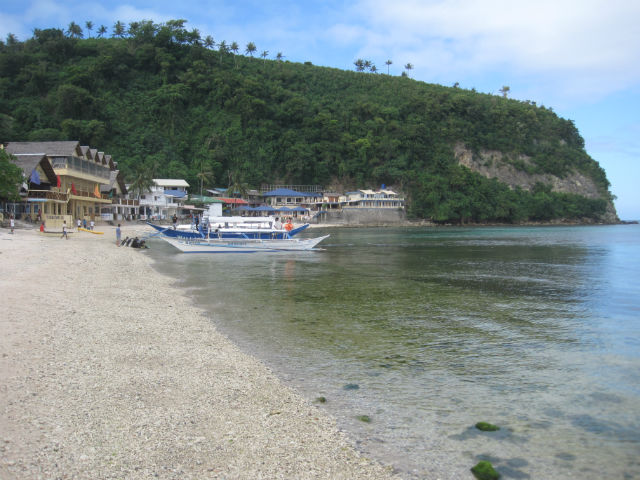 I can’t remember if this is Sabang Beach or one of the Lagunas next to it, but I was impressed by the cleanliness of the water. 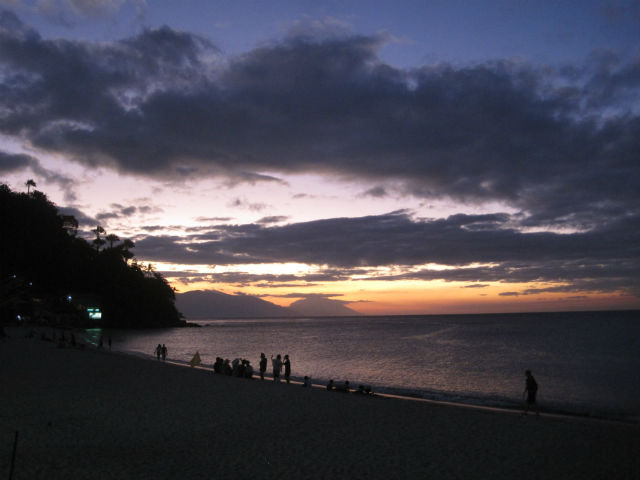 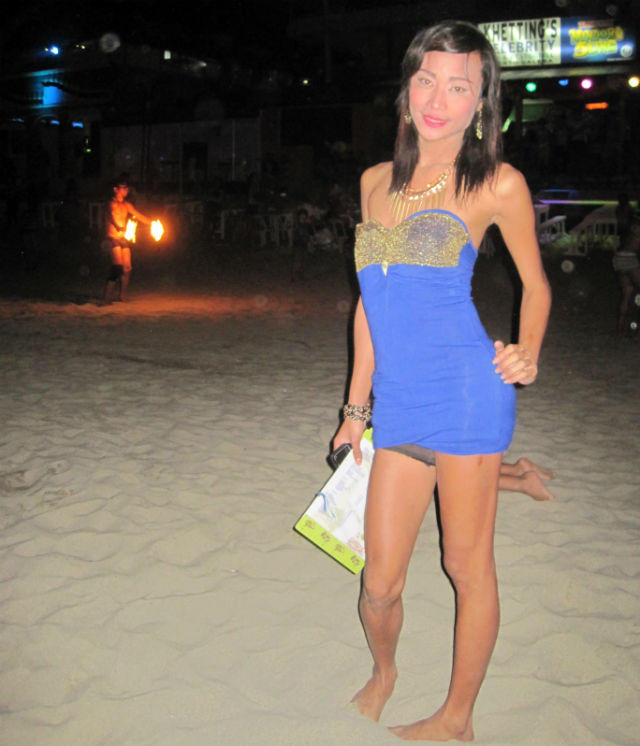 There is a very weird scene in the evening on White Beach where scores of ladyboys come out of the woodwork to sing, lip-synch and dance. Little makeshift stages are erected and there are at least five different shows going simultaneously, all blasting music to compete with each other for small weekday audiences such as this bit of the song, “Domino“. 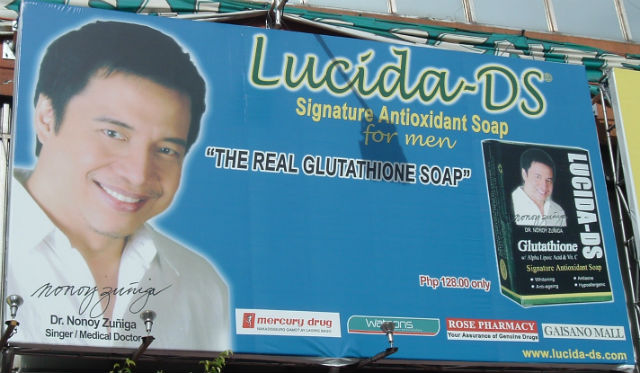 The photo above I took years ago; I think of this billboard every time I am in the Philippines as it encapsulates the relationship between Filipinos and music. The “singer/doctor” in the bottom left corner says it all, the idea that “singer” is more important than “doctor”.This is the country where prisoners—a lot of prisoners—danced en masse to Michael Jackson’s “Thriller.” This is the country where the boxer Manny Pacquiao goes on American TV and sings a sappy 1970s love song.
In Philippines what often happens is that in a shop somewhere you’ll be surprised to hear a semi-obscure American love ballad from the 1970s and then shocked that someone in the shop knows it well enough to sing along, but it happens all the time. In the Carabao tourist office I made a joke about singing an Air Supply song and I started, “I’m all out of love, I’m so lost without you…” and I stopped because that’s all I knew, but all four women continued in unison.
I’ve been in poor Filipino homes with dirt floors but with a karaoke machine as tall as they are. Priorities! My favorite memory from the month I once spent on the island of Siquijor was walking home every night in the near-darkness and hearing in the far-off distance someone singing “Love Hurts” or “How Can You Mend a Broken Heart?” 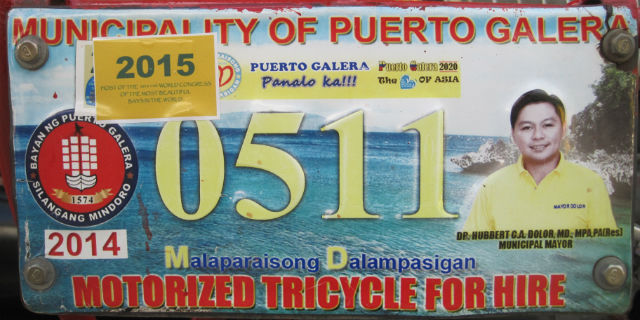 This epitomizes the problem with Filipino politics: those in power love to plaster their name on everything. Do you really need your ugly mug on the license plates? When you get voted out, will the next mayor be happy with your face on the plates? No, so they will need to issue new plates with their photo… 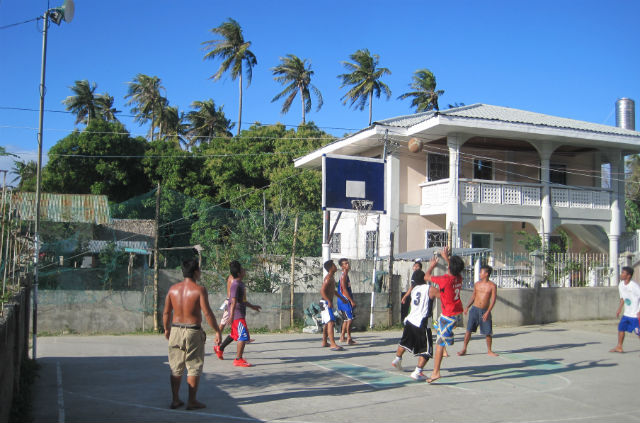 In White Beach I stayed in the annex of Manalo’s Lodge a fair walk back from the beach. The owner is a big basketball fan and when I showed interest I was summoned to play with him on a hidden court nearby. He was giddy about my size. They played for 20 pesos a game, he said, and he could smell victory. “We’re gonna drink rum tonight!” he exclaimed. But I was awful again, super slow, can’t jump, an embarrassment to the sport. After the debacle the owner kept saying it was OK, but I must have disappointed him. I disappointed myself.

PRACTICAL INFORMATION (45 pesos = US$1)
Manalo’s Lodge Annex (tel 0917-6096072, 6674077) is only 400 pesos, cheap for White Beach. Discount possible if you play pesky defense, hit corner threes and can run the pick and roll on the weak side high post. White Beach is another of those places that it is impossible to get information about cheap accommodation on Google, but walk inland from the beachside resorts and you can find something.
Hitchhiking isn’t for everybody, but taking the bus or jeep isn’t so fun in the Philippines, especially for someone my size. Then the bus brakes too hard and too often and the jeep stops at every tree, both with annoying air horns. I think I am getting old. 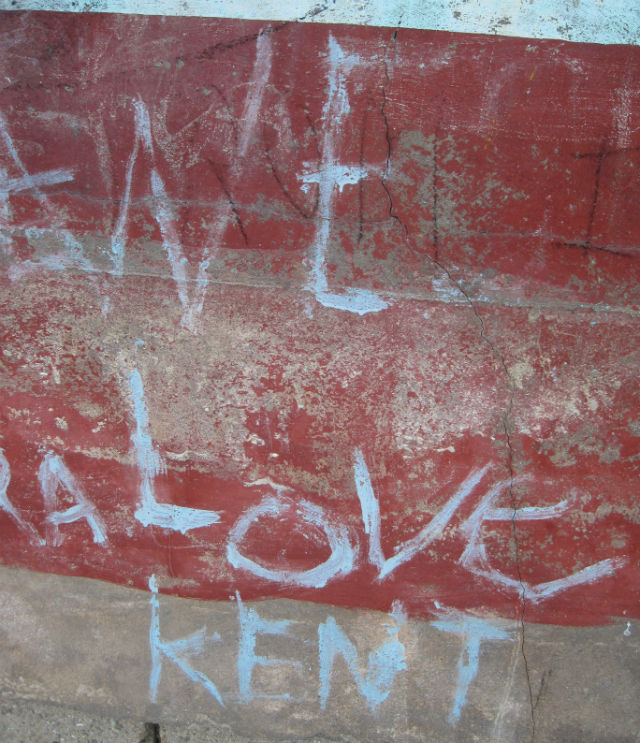