MEMORY LANE
The bad old days. It was bread and cheese all the time. It was hard to find anything else. I would go into the small stores, get my bread and cheese, maybe some sunflower seeds, gamble on something new if it had intriguing packaging, and bring my meager lot to the stern babuschka at the counter. Cash registers weren’t always to be found, and in their place was an abacus. An abacus! The babuschka would aggressively slide the caroms to and fro, and then look at me impatiently, waiting for money. I would feebly ask, “Skolko?” (How much) and I’d watch as her face tightened and she would gesture with her open palm to the abacus between us with an exasperated look that said, “It’s right in front you, Jackass! Can’t you read?!”
I heard rumors of Georgian restaurants, but I could never find one. If I found a guy selling plov (rice pilaf) on the street, I ate enough for two meals. Pelmeni (dumplings) restaurants were also cause for celebration.

I’ve become a toilet snob. If it isn’t historic, I’m out.

Now it’s all Uzbek/sushi restaurants and everything under the sun if you have the money. The big American fast food chains are here, but Putin is on a western food jihad, banning imports as a retaliation for sanctions and destroying perfectly good food for show. Even the most fanatical of Russia supporters can’t defend it.
I don’t mind the ban. I don’t even notice the ban, which seems selective, as western food can be found without much trying. I can eat at a stolovaya or bistro, both cafeteria-style food that is much better than it sounds, all day, every day. Great selection, reasonably priced, and very Russian. Big fan. 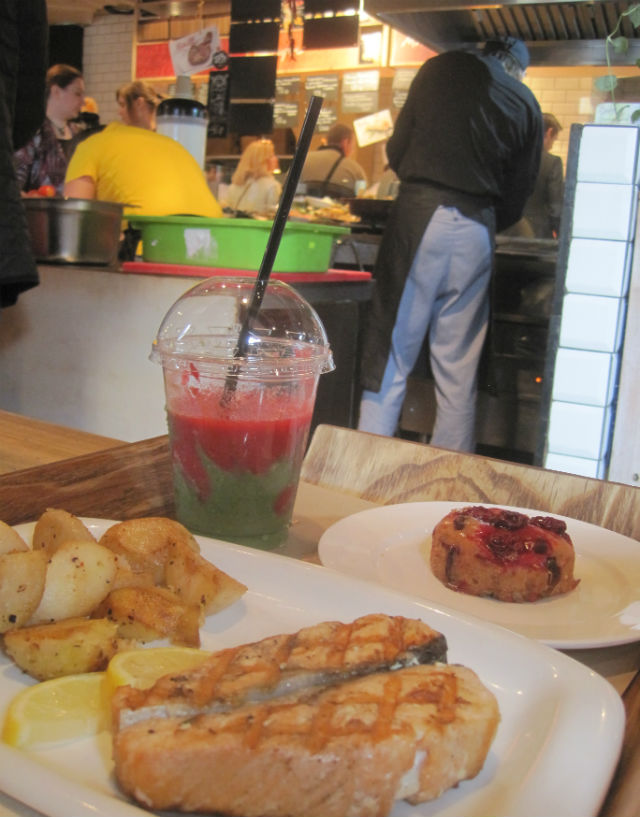 This is Market Place in St. Petersburg, a high-end stolovaya. I think it is a chain. I hope it becomes a worldwide chain. It wouldn’t be out of place in California one bit, right down to the strawberry and basil smoothie. The salmon steak, potatoes, dessert and smoothie was about $8. 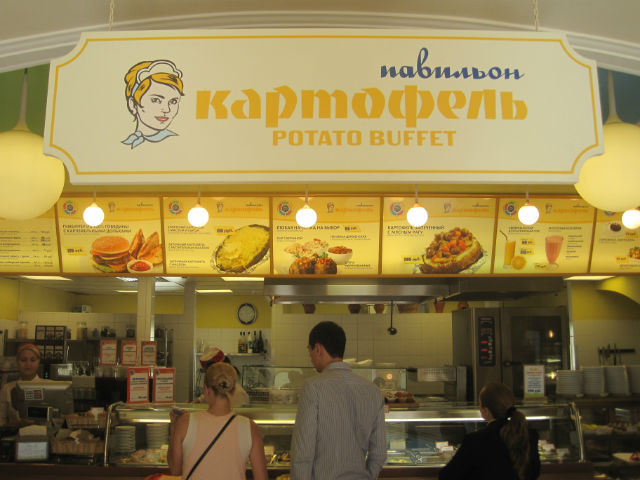 In the otherwise completely fifi GUM department store/mall off Red Square in Moscow, on the top floor is a place where normal people can eat. This isn’t really a potato buffet, but it’s a good time to point out that Russians love dill. It’s unavoidable, and as we all know, if even a microfiber of dill is on something, that something tastes of dill and only of dill. 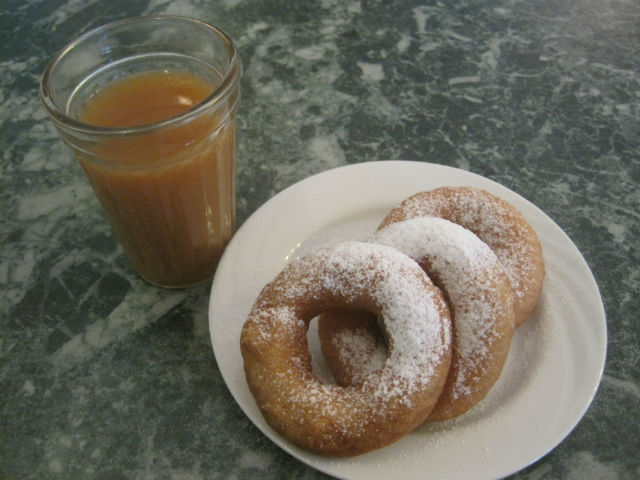 There’s a very old Soviet-era donut place in the middle of downtown St. Petersburg on Bolshaya Konushenaya. They are called pushki, though I’m somehow unable to pronounce it correctly. 13 rubles (20 US cents) each. Thick juice is another 25 rubles (40 cents). 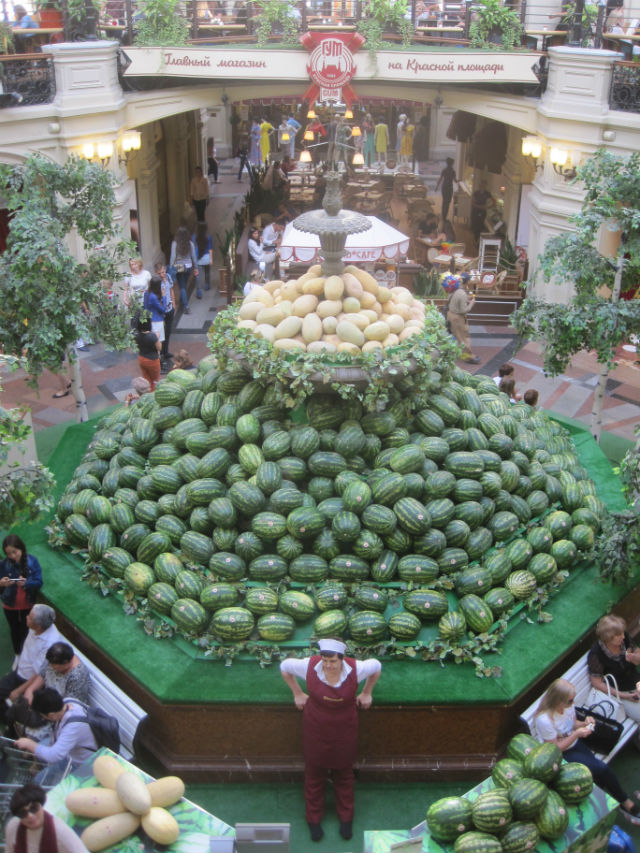 This was a fountain covered in watermelons in GUM. 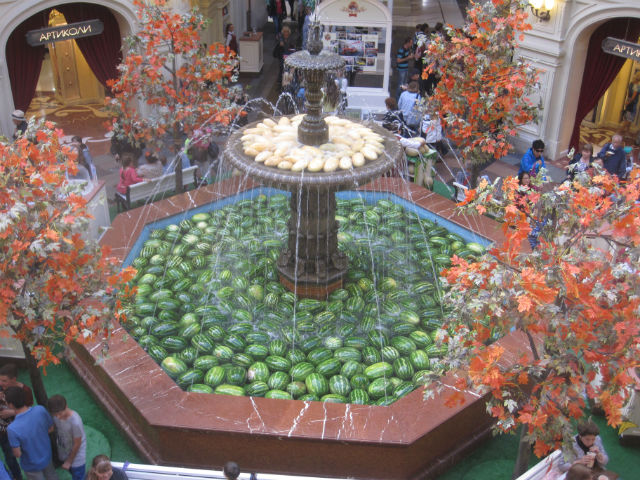 And then the next week the watermelons were in the fountain. 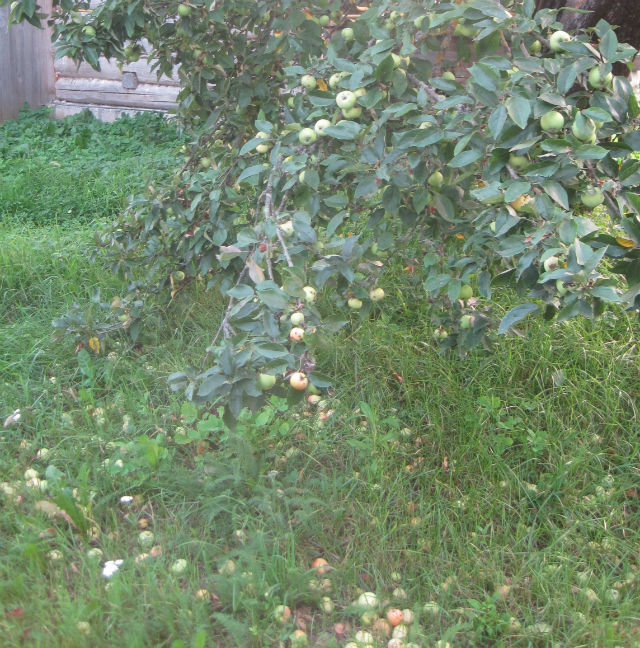 A common sight: an apple tree groaning under the weight of a zillion apples. I know they’re in pain because every time I walk by they are yelling, “Get these apples off me!”