There was some miscommunication between Sam and I about what he wanted me to bring to USA. I thought it was two loose CDs, but it was a factory CD set that was uncommonly heavy.   In other words, Sam put me in an awkward position.   Taking something like that to USA is a lot to ask. Florida and Texas are the two worst states for messing with the law, and it made me nervous.   In Bogota airport I sought out the canine police and had the dog smell and slobber on it.   The police  seemed sympathetic, the dog seemed unconcerned, and a policewoman inspected it further by taking out a sharp object and trying to pry the CD cardboard open.

I thought it was the last of my worries, but at immigration in Fort Lauderdale I got a long interrogation.   I answered truthfully, but it was stranger than fiction for the immigration officer.   He seemed incredulous that someone would spend a month in Colombia as a tourist, and that it was my 4th time there.   And I am going to Switzerland next week.   And that I travel so much. And my passport wouldn’t scan. And it was my 5th passport.   And so on.
I didn’t help my case when he mentioned that I had been in Calgary last year.   I was caught off-guard by it and had a blank look on my face. Was I in Calgary?   “Oh!   Yes, I was in transit from Europe,” I recovered gamely, but the damage had been done. I was asked to provide more identification.   That’s never happened before.   Since when is a passport insufficient?   It dragged on, and in the end he marked my entry form with a big fat red pen “1A” which meant my bag had to be scanned at customs.

I got out eventually, dazed, wondering if the immigration computer system is going to label me as a troublemaker and I will have to  give the same unsatisfactory answers every time I arrive in my country.

Minutes later I was being fed ceviche and mahi mahi on a TV cooking show being taped right inside the terminal.   Wha’?!   Huh?   They needed people to be the audience and I looked the part.   It was for a guy who calls himself Chef Allen, and I was happy to show enthusiasm while being fed three courses. 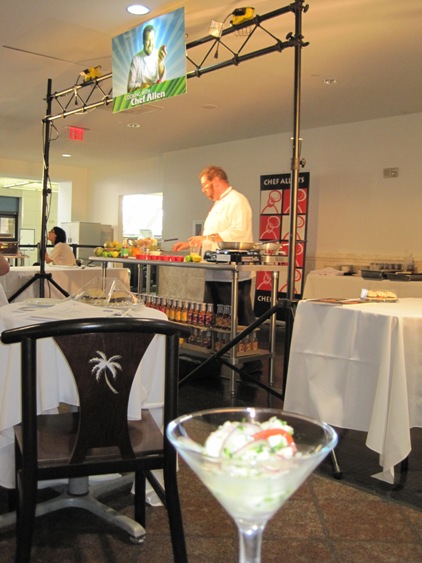