It’s a great feeling to take the ferry from the Asian side of Istanbul, Kadikoy, to the European port of Eminonu, with the whole central area laid out in front of you. Istanbul continues to be an amazing place despite it being the scene of two travel disasters for me, namely getting so sick I couldn’t fly out once and getting pickpocketed at a Galatasaray soccer match.

In the hectic city it’s nice to duck into a cool, soothing mosque. I went into the Yeni Cami (“New Mosque”) by the Spice Bazaar. Only in Istanbul could something called “New Mosque” be 450 years old.

I see a word or two here and there that is the same in Hungarian: csorba (soup), pogacsa (bakery item), alma (apple), kapu (gate), sapka (hat).   The original Hungarians, the Huns, migrated through this way from the other side of the Ural mountains in Asia, before settling in “Macaristan”. 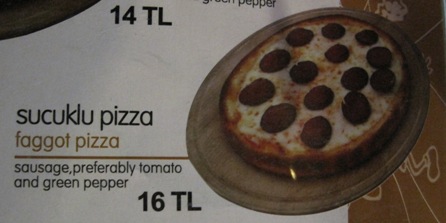 I don't know any more than you do about this

Istanbul is full of mid-range hotels that have breakfast buffets, and there are so many tourists that it would be easy to mix in amid the lax security and enjoy the food. Not that I would ever do such a thing. A-hem!

I told the staff at my hotel that a “very important” letter was arriving from America. I won’t open it in front of them because it is really just my mom sending a USA flag for hitchhiking. I am looking forward to trying it out this weekend. 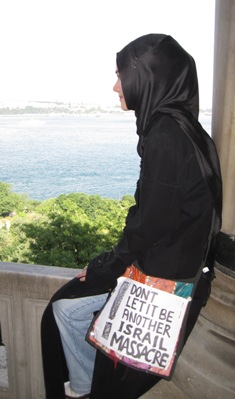 Where in the world is it easiest to buy a USA flag? Wouldn’t the answer be Iran since they are used in so many anti-USA demonstrations? I imagine every department store has a stack of them in the Burnable Goods section.

Speaking of Iran, I am still waiting to see if a friend can get me a visa. If I went it would be in the scorching hot summer and yet it isn’t the done thing to wear short pants in such a country. I heard that only when you are playing sports can you wear shorts, so my idea is to wear shorts and walk around all day and night with a tennis racket in my hand. Genius idea?

Turkey is in the news right now. There have been riots outside the Israeli consulate in Istanbul because of an attack on a boat full of activists, many Turkish, outside Gaza.