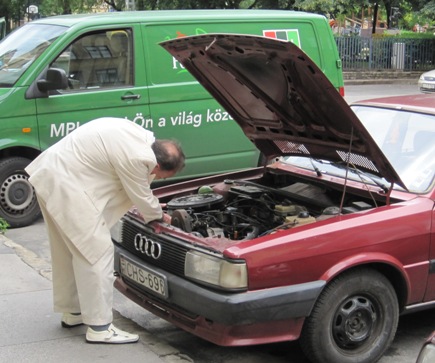 "Honey, I am going to put on my white suit and go work on the car!"

When I watch these World Cup games I like to see how cold and bundled up the fans are and how many empty seats I see.   It is the middle of winter in South Africa, and many stadiums are well inland, making for some chilly evenings. The next World Cup in Brazil won’t be any warmer in the southern host cities.   Sao Paulo in June?   No thank you.

I was in Denmark watching the first game on TV of the 1994 European Championships between Romania and Bulgaria in Newcastle, and there were tons of empty seats.   Up until that point I had read of massive sellouts, but I decided then and there to hitchhike to the ferry and I went to England. I saw three games in three cities, buying tickets for reasonable prices outside the stadiums, and found three places to stay with little problem. The point is to just go and it will work out, something I will expand upon in my website relaunch this summer.

When I am filthy rich (North Korea on 10,000-1 odds to win the 2014 World Cup—trust me) I am going to buy stadium advertising for the World Cup just to promote a friend’s business like Nelli’s Tutoring or Peter’s Corner Bar.