I’m contemplating where to stay when I go to Amman, Jordan next week to start my trip. My last time waaaaaay back in the 90’s I stayed where everyone stayed, the Cliff Hotel. It’s one of those places where you felt compelled to go for the information exchange with other travelers. I remember it also being horribly dingy and overcrowded and I kept bumping my head on the doorway as I entered; there was a deep groove in the wood from the many who had done the same before. 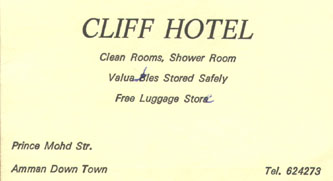 All the photos from my first Middle East trip were purposely destroyed, and it's a story that still riles me up when I think about it, but that's for another time. For now I only have paper things like this for memories.

Google tells me that the Cliff is a magnet for Japanese travelers on their way to Iraq, though I don’t know how old that information is. The last time I read anything about the Cliff was in 2004; a Japanese traveler wanted to go to Baghdad to see for himself what was going on. He had been staying at the Cliff and the owners had tried hard to persuade him not to go, but the next anyone heard from him was in a video where he was beheaded.
It seemed very Japanese to not be aware of the danger. There are little booklets in Japanese to warn travelers of the many scams and ripoffs in America, many over-the-top, but for other countries Japanese can be woefully uninformed.
I love meeting Japanese and they are very interesting travelers, but it isn’t necessarily a good thing to stay where they stay as they can serenely endure the worst scumpit guest houses, a state of mind I have yet to achieve.