Before I get started…I was checking out the departures board in the Damascus airport and I was caught by surprise: a flight to Caracas, Venezuela on Conviasa. How about that route: South America straight to the Middle East? South America to Europe is a black hole for cheap flights; what if Caracas to “Damasco” was an option? I’m filing it in the back of my head. I may tattoo it there, too.

I said I’d eat my passport if I saw anyone else on the Damascus-Bahrain-Addis Ababa flights, but I wasn’t thinking of 10 or 15 Ethiopian maids returning home. I’m a man of my word, though, and I needed the fiber anyway. 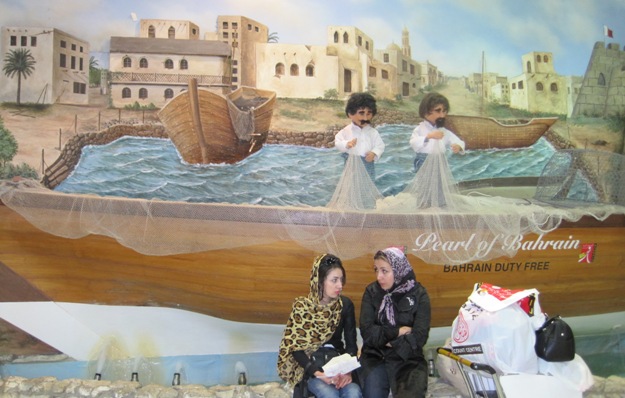 In Bahrain I was wondering why they were boarding the plane 40 minutes before departure, but it became apparent quickly enough. Nearly the entire 737—you know, an aisle down the middle, three seats on each side—was occupied by Ethiopian maids going home with a lot of baggage. I was the only westerner and one of only a few men. It was an animated group speaking in high, chirpy voices with lots of giggling.
The woman next to me, a clothes importer coming back from Dubai, explained everything. These girls go to the Gulf as maids, earning about $100 a month in addition to room and board on three-year contracts, and finally they were going home. She stared glassy-eyed as they were trying to cram as much as possible into the plane and stuffing it in places that was making the flight attendants work. “It makes me so sad,” she finally said, shaking her head. “You know Arabs…,” her voice trailed off.
Oh, I know the stories about Arabs all right.
I should make the distinction between Middle East Arabs (such as Syria, Jordan, Lebanon, and Egypt) and Gulf Arabs (Bahrain, Qatar, Kuwait, Saudi Arabia, etc.) On the surface, Gulf Arabs dress ostentatiously in their floor-length, full-body garments known as jalabiyas, often with head scarves smartly tucked under the black rope thing that I should know the name of. The essential difference, however, is that Gulf Arabs are wealthy through oil. Middle East Arabs regard Gulf Arabs as indolent buffoons who lucked into riches and subsequently became fat, lazy, and dumb. Saudis especially are the butt of hillbilly jokes.
Gulf Arabs are also infamous for abusing their maids like slaves. There are countless sad stories ranging from the mundane (wages withheld for made-up fines or fees, passports taken away to ensure fealty) to the serious (beatings, torture, sexual abuse, and outright murder)—and those are just the stories that make the news.
For all the jobs that poor women leave home for out of desperation, nothing is worse than being a maid in the Gulf except for being a prostitute in the Gulf. When I was in the Philippines, the global leader in exported women, I heard the stories all the time, and yet, if you are at rock bottom, what else can you do? You go to the Gulf.
But why Ethiopians? There are only so many Filipinas in this world (they are trying hard to keep up with demand), but why not Egyptians or Sudanese, people with a more common language, culture, religion and just as poor? The cynic in me thinks it is precisely because Ethiopians ARE different.
They are easier to exploit. They are less likely to complain—to know HOW to complain—to know their rights, so they keep their outsider status. The Ethiopian government is hardly going to complain as these women bring hard currency back home, saving them from supplying jobs. If Eskimos were as destitute, they’d be in sky-high demand in the Gulf.

The boarding was turning chaotic. The woman next to me somehow knew who needed to be rearranged to sit with whom, which was done easily and without quarrel even though she was a stranger and we left only 30 minutes late. I told her she was like a mother to everyone and by way of explanation she stated plainly, “I didn’t receive my mother’s love.”
After the meal (gotta love the girl who went up and down the aisle with a barf bag collecting everyone’s unused tiny packets of butter and cheese from the meal; let’s not waste food indeed!), the different moods on the plane amplified. It became more raucous with singing, clapping, shouting for friends sitting afar, and some turned angry. One girl had to be restrained from fighting another in the aisle in a feud about money, I was told. Another woman started screaming at everyone else to shut up. When it got noisy all the lights were shut off and we sat in the dark, a tactic to calm everyone down, but this group was unstoppable. It was the loudest flight I have even been on.
If someone sang a song or yelled something, a bunch of others would yell in support, “Ayayayayayayayaya!” like kids do when they play cowboys and Indians (cowboys and Mexicans?) In a quiet lull a woman summed it all up with a primal exclamation: “The past is over!”
It was the strangest feeling to sit in a darkened plane, hearing these cathartic bursts of emotion being released around me. I just sat there, yet was exhausted. I was relieved to finally begin our descent. Everyone felt it at the same time and roared.
The flight attendants had abandoned ship; they stayed in their seats even though people were standing in the aisle just before we were about to land. There was a stern voice on the intercom demanding that they sit down, but who is the genius at Gulf Air who thinks it’s a good idea to have neither an Ethiopian flight attendant on board nor any announcements in their language? On the other hand, can you imagine being a regular flight attendant for this route? I wonder what the mood is like on the outgoing flight.
As I expected, the back wheels of the plane had barely touched down when there was the loudest eruption yet, and in an instant someone leapt out of their seat and bolted for the door. I’m sure if no one had stopped her, she would have gone for the handle at 250 miles an hour.
As we all waited in baggage claim, behind me I saw a woman who cleans the toilets in the airport leaning forlornly on a pillar, looking at the group. I couldn’t tell if any of the women on the plane had caught her eye, or how many might have wished they had that job instead of going to the Gulf.

Lastly, if the first few days are any indication, blogging in Ethiopia will be difficult. I will write stuff offline and upload it when I can. I always answer emails, but please have patience with me while I am here. Pretty please!