I’ve never been anywhere near Ethiopia. It feels like I haven’t been in Black Africa for a long time. (Is it not PC to say that? Should I be saying, “Sub-Saharan Africa”?) though I was in South Africa only four years ago. It’s strange to be in such a new country where everything feels different. Stepping out of the airport into the 2355 meter (7726 feet) elevation of Addis Ababa (“New Flower”) was exciting and exhilarating, the best kind of strange. It didn’t go unnoticed that the taxi was quiet with only one or two honks, and I felt comforted for some reason when I saw a Hungarian “H” sticker on the back of a Lada. 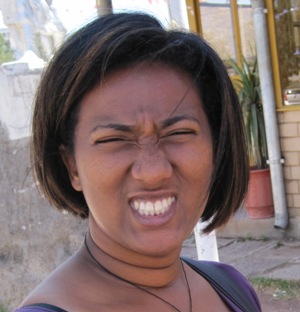 I’ve had enough of travelers hotels the last few weeks. I’ve put up with short beds and sharing rooms with a cast of noisy characters: the Korean teeth grinder, the 5:30am praying Turk, German party animals, and on my last night, an amorous Dutch couple on one very creaky bed. And those don’t include the snorers, who come in all races, creeds and colors.
The research I’d done on Addis Ababa, I read more than once that I should spray down the room with poison an hour before I want to sleep to get rid of bedbugs. What the heck is that? I can and have put up with a lot over the years—more than most people—but bedbugs is the line I don’t cross.
I tried for a Couchsurfing host here in Addis Ababa and lucked out with my first try, an event organizer named Eskedar. I’m way out in a distant suburb, but I like being the token white guy in a regular neighborhood. I checked out the part of town where travelers stay, and touts hassle me. Here I am seeing how Ethiopians live, and I’m learning things I wouldn’t have if I’d just hung out with other travelers. Even if it sounds like I say this in passing, this is no small thing and I feel grateful, if not indebted, to Eskedar.

Unfortunately, I committed a cultural insensitivity when I was paying Eskedar back some money, and I did it on the street corner. White guys paying black women on the street just doesn’t look good, no matter how innocuous the truth is. She was a little embarrassed and laughed about it, but since she doesn’t know many people in the neighborhood and people do stare, she might have been serious when she said it might be better if she had only female guests.
The big downside to being far from the center is that it’s a pain to get anywhere in Addis Ababa because public transport is almost entirely in vans, and there aren’t enough. At rush hour it’s only-the-strong-survive to get in one if there is space. I don’t know how women get anywhere. It has significance for me because Eskedar was robbed two of the four nights I stayed with her. In both cases she was preyed upon because she was rushing to try and get in a van and in the scrum she lost money out of her purse. It wasn’t too much because she puts only pocket money there, but they also got her cell phone and besides, who appreciates being violated like that, no matter what the amount? Eskedar was down, but remarkably sanguine (is that how the wod should be used?) about it, to her credit. I’d be in a very sour mood. I tried to cheer her up so we watched “School of Rock”.
Trying to find an alarm clock in Ethiopia is like trying to find a Walmart in San Francisco. No one needs one, so why do I keep trying to find something that doesn’t exist? One guy told me, “In Africa time is meaningless,” or something like this, but I’d like to watch him argue that point with the bus company that sells nonrefundable tickets for 5am departures. Again, I had to impose on Eskedar to run around and make it so I could wake up on time.

So what is Addis Ababa like? Can I tell you later? I have to return after I do a northern loop of the country. For now, it’s a place where good food is found in gas stations and people are quick with a smile. They also speak better English than I would have guessed, which makes for more interesting conversations. Next: upcountry—if I can catch the bus. 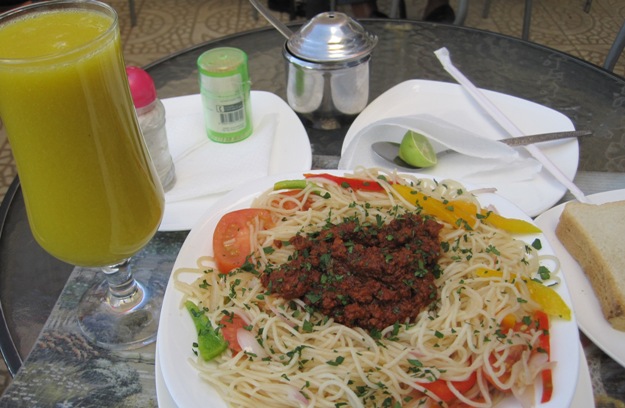 This above is from a gas station cafe. Fresh mango juice and pasta (did you know Ethiopia used to be occupied by Italy?) with a spicy tomato sauce, about $2.00.