It’s the early afternoon. I’m in a stationery store. I ask the woman what time it is. She says, “8:30.”
It’s not 8:30. It’s the early afternoon. I must have misheard her. I ask again. “8:30,” she says.
I look her up and down. She runs a business. I haven’t done anything for her to yank my chain. She doesn’t even know I’m American. I ask, “Are you sure?”
We look together at her cell phone. It says 8:30. I thank her and leave the store confused. Only later it dawns on me that Ethiopians measure time based on their own calendar and the Ethiopian day starts at sunrise, which they call 12:00 and what everyone calls 6:00. Got it?
And the present year is 2003. 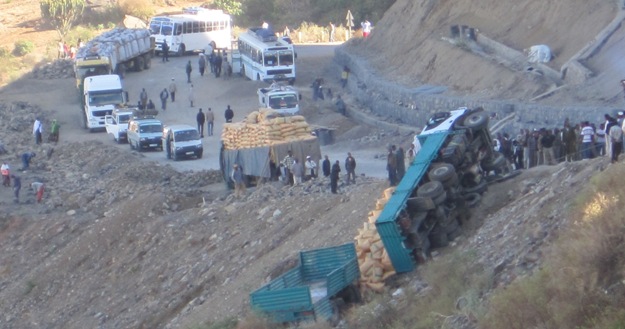 Addis Ababa to Bahir Dar was a stereotypical African bus trip that I am perpetuating. The (only six month old!) bus broke down a couple of times, and then there was this delay. 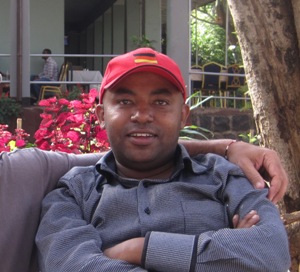 I keep thinking I should be coming up with deep thoughts and Truths about what being in Africa is about, but I’ve only been here a week or so and am still feeling my way. But what about this: at the Ghion Hotel I proofread and edited some documents for Bisrat, the manager in exchange for a hot shower in his office and a discount on a boat trip the next morning—and I don’t even stay at the Ghion!
The point is to have the liberating feeling that anything is possible. Tomorrow I may feel the opposite, but just to have the feeling, however fleeting it may prove to be, makes being here exciting.
Everyone gravitates to the Ghion. It has an ideal, relaxed setting next to Lake Tana, good food, cold drinks, soothing breezes and horrendous mosquitoes at dusk. Bisrat is a fixer, able to arrange everything you could need: transport, hotels, tours, communications, etc. I like him because he not only looks like Charles Barkley, especially when he raises his eyebrows, but he has a sense of humor that I like.
He had an employment poster for a new hotel opening in Addis Ababa and I said he shouldn’t show it to his staff or they might leave. Without missing a beat, he deadpanned, “I hope they leave.”
He made a call for me to a hotel in the next town I am going. While on the line he said to me, “They’re full.” As a joke I said, “Tell them I’m American.”
In an authoritarian voice he barked into the phone, “He’s American!” and then with professional comic timing, “Hello?” faking that they hung up on him. 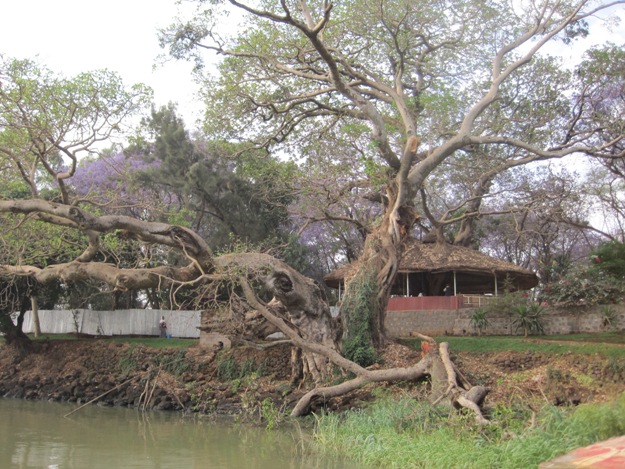 The Ghion restaurant behind the giant tree

Mellow Bahir Dar is a good place to get settled into Ethiopia. It lies 575km northwest of Addis Ababa on the shore of Lake Tana, which is the source of the Blue Nile River. And of course you know that the source of the White Nile River is Lake Victoria on the Uganda/Kenya/Tanzania borders. And we all know—it’s common knowledge by now—that the two rivers meet in Khartoum, Sudan before rolling north through Egypt to the Mediterranean.
These days Egypt is pretty miffed with Ethiopia for damming rivers for hydroelectric projects. Ethiopia doesn’t get along with any of its neighbors very well, it seems, save the pseudo-country of Somaliland.
A few of us “faranji” (foreigners) made a trip to the Blue Nile Falls about 35km out of town. It was market day so the trail was busy with people bringing livestock and whatever else they have to sell. We walked a loop of about two hours and didn’t see any settlements whatsoever; they must have been walking a while. Below are some whole, dried cow hides being brought to the market. 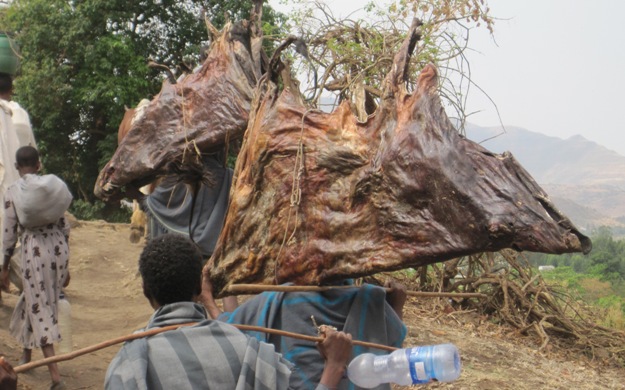 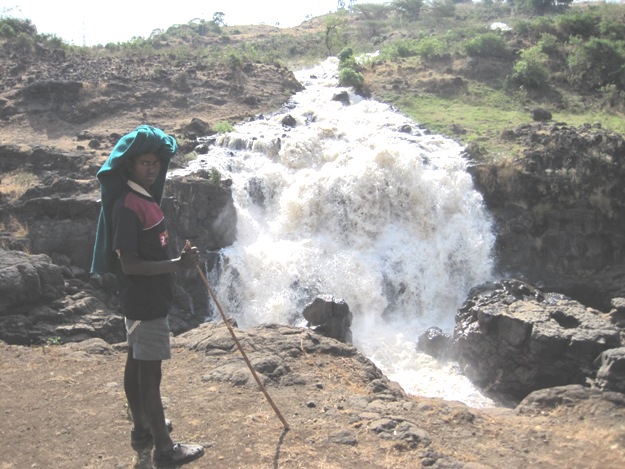 Doesn't this look like it's from a movie studio set? A button is pushed and water comes pouring down the hill. 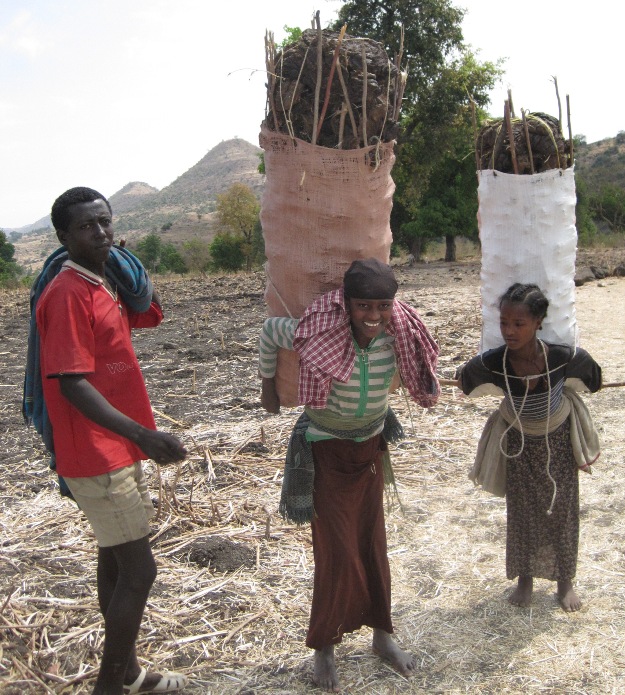 I gave this girl in the middle my shirt that is around her neck. It's incredible that women---young girls---carry such big loads. This guy came over and I assumed he was going to carry it for her, but he merely made sure she was balanced OK. I hope she doesn't give him the shirt. 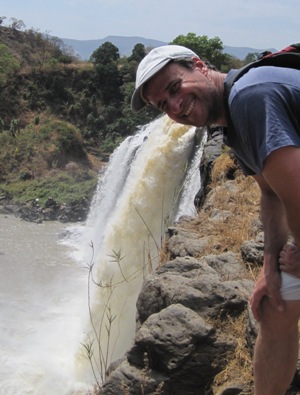 One reason I came to Ethiopia is that much of it is at high elevation with few mosquitoes, meaning a negligible malaria risk. Malaria pills mess up my head and I want to avoid them. Only recently did I read in Lonely Planet that in Bahir Dar, elevation 1800 meters (5300 feet), “Malaria is endemic.” Great. At sunset I dress like a mummy. 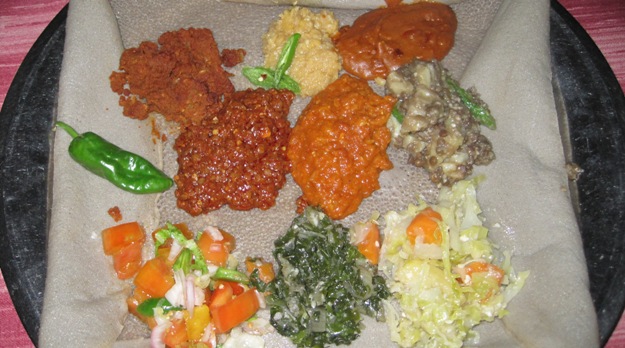 The most common thing to eat in Ethiopia, beyaynetu, a melange of vegetarian delights. $1.30. Ethiopians are magicians with chickpeas and lentils (which are five of the top six items you see on this platter), so why do I not see falafel here? It really wouldn't go over well? They deep fry potatoes on the street. Why not take it to the next step? Another free business idea from The Dromomaniac!

Another tour was done on the lake, visiting a church with these mural images: 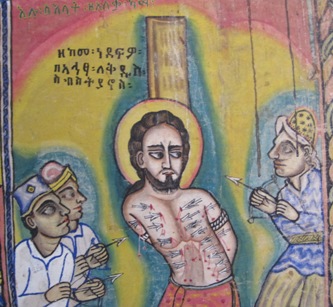 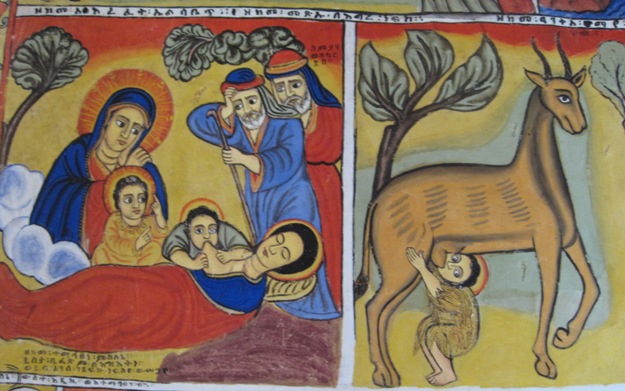 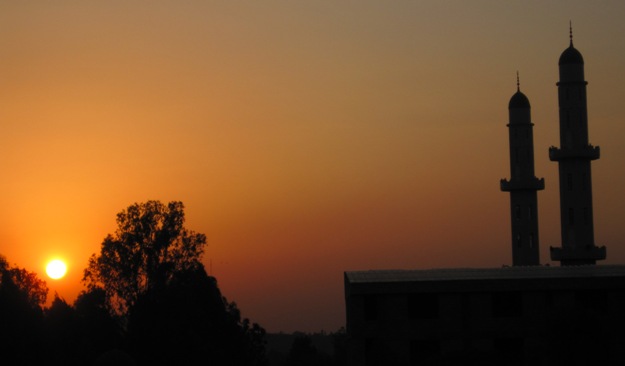 Mosque at sunset. Ethiopia is about 1/3 Muslim and 2/3 Christian.