It’s not fun being sick while alone, while alone in another country, while alone in a village with no pharmacy, no electricity for a day and a half, and no healthy food options. I have to say, I have a huge latent appreciation for electricity. Big fan.
Been sick a solid eight days. Now it’s all about my coughing and hacking phlegm by the liter, plus my voice is like Darth Vader’s.
There’s no pharmacy here in Lalibela but there is a clinic over the hill where I did get some cough syrup, but the bottle is empty by now and I’m no better.
It is seriously incredible how much phlegm is in my system. Every night I sleep with a plastic bag or some papers on the floor next to the bed so I can lean over and spit out phlegm in the dark and hopefully hit the target. I can summon up a gooey, greenish glob at will just like others can belch at the drop of a hat. How did I get so much? Is there a Guinness world record for Most Phlegm, middleweight division? (I’m getting closer to middleweight. I’ve lost about 10 pounds (4.5kgs) already on this trip. It would be something to celebrate if I didn’t balloon up to morbidly obese before I left home.)
I saw a doctor—two doctors—sort of. I met two Swedish medical students who had a look at me. In lieu of a tongue depressor we used my ballpoint pen. Their diagnosis was a virus that I just have to rest and get through. Then I met some Austrian nurses who gave me some pills. 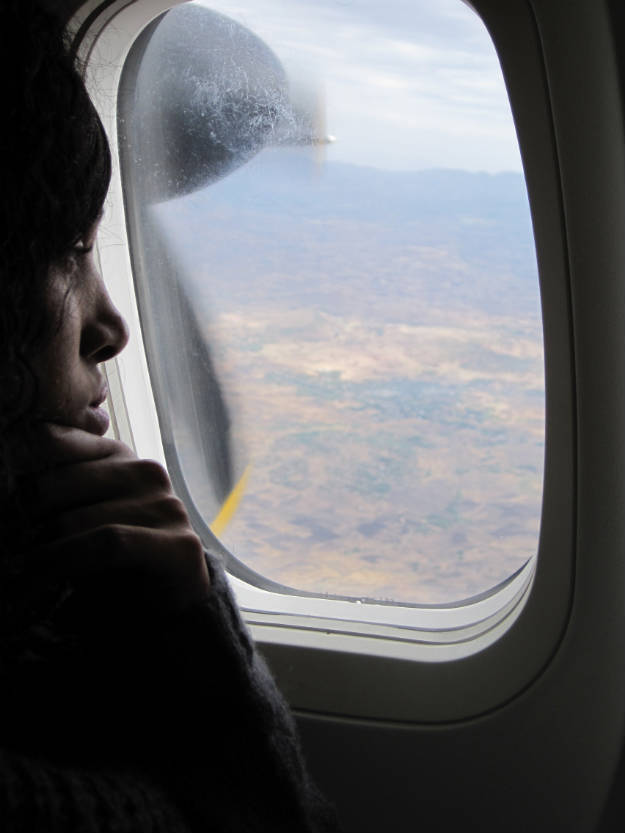 Look at this artsy photo of the girl next to me on the plane. I'm a scary talent.

Gonder to Lalibela is a 12 hour journey east on two buses with a 5am start and two hours on a dirt road to finish—or a $28.50 domestic flight. Young Kent Foster might have scoffed at not doing every segment overland, but for Decomposing Kent Foster, it’s a no-brainer—and you can bet I am going to try and accrue frequent flier miles, no matter how few there are.
When I first got to Lalibela a few kids hanging out near where I stay asked me my name and I said, “Abebe Bikila”, a famous Ethiopian marathon runner from the 1960s. Somehow word got around and whenever I step out of my hotel and on to the street, there are always shrieks of “Abebe Bikila! Abebe Bikila!” It was fun in the beginning when I was buzzed to be here, but now I have no energy to respond when I huff and puff up the street like a decrepit 80 year old man.
Other times I hear people call out to me, “Shifta!” That’s another thing I regret saying in my failing health. If I register in a hotel and the form asks for my occupation or if someone asks me my job, I say, “shifta”, which always gets a laugh. It means “bandit” and is the only local word I knew before I came here since I often read of problems with shiftas near Ethiopia’s southern borders.
In Hindi the word for bandit is “dacoit”. Just showing off. 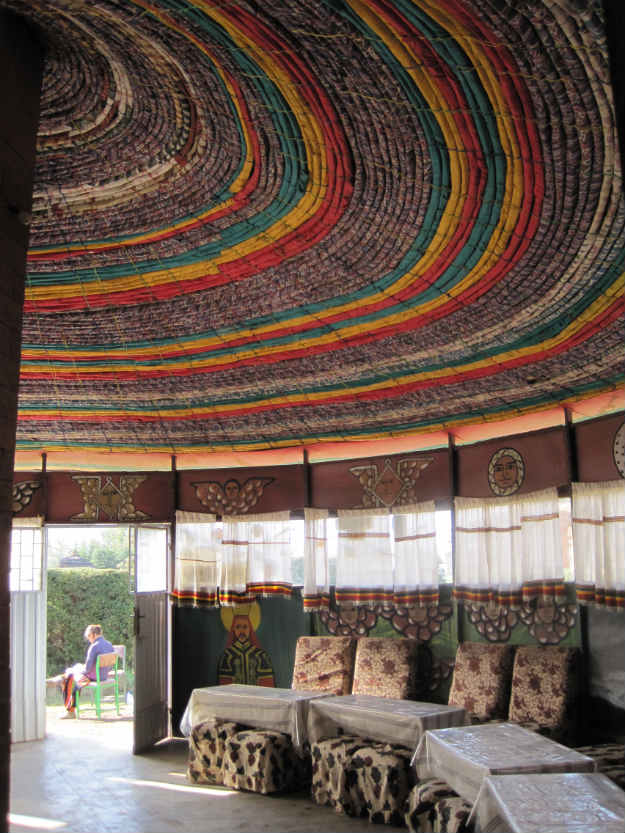 This is the restaurant at the Lalibela Hotel, the cheapest place in town but the coolest restaurant

To match my Simiens debacle, I thought of going the whole perverse nine yards by staying in Lalibela for four nights and not seeing the churches which are arguably Ethiopia’s number one tourist attraction, but I summoned up the requisite energy and did it. I’m not afraid of this conversation either:
“What did you do in Lalibela for four days if you didn’t see the churches?!”
“Oh, I had a Filipino movie on my laptop I had been wanting to see. Stuff like that.”

Lalibela is know for its 11 churches carved out of rock, and not into the rock, but carved entirely away from the surrounding rock. It’s an incredible thing to imagine how that was managed so many hundreds of years ago. I grumbled about the 350 birr entrance fee for the area ($21), but when I saw Bet Gyorgyis below, I was awestruck: 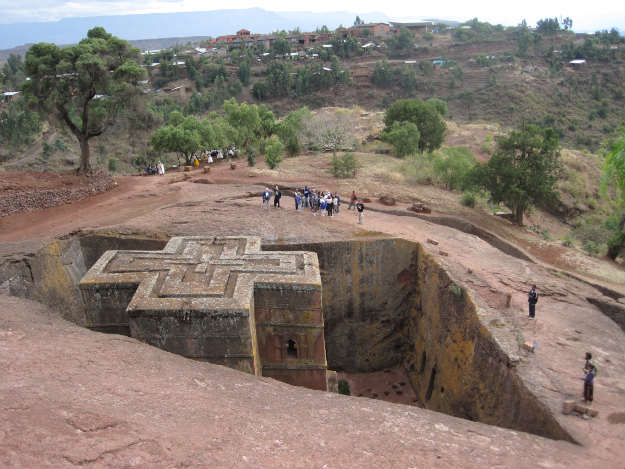 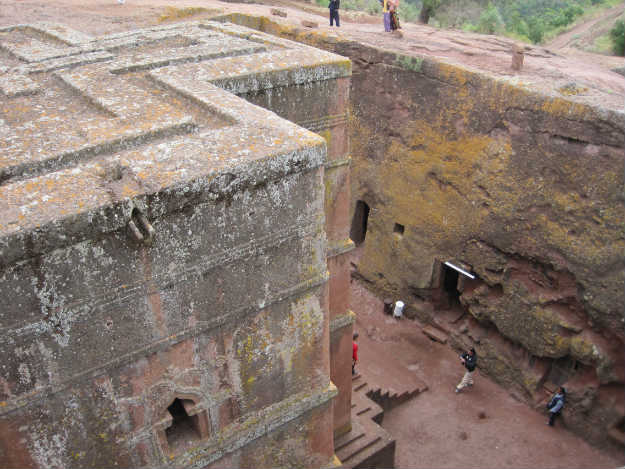 I flew from Lalibela to Addis Ababa today. The choice in this case was a two-day bus ride or a $53 flight. By “two-day bus” I mean two separate days, not overnight. There is no night transport in Ethiopia. Is it because of the shiftas? Again, in my health, I only agonized about this decision for a few minutes.
I’m thinking of getting a Somaliland visa tomorrow. From what I hear, it sounds like paradise, even if I do need a police escort anywhere I travel. Shiftas, you know.