I like embassies. I’m not crazy about running around town trying to find embassies or paying for visas, but it’s an interesting introduction that is usually representative of traveling in the country. There is a North Korean embassy I might visit if I was feeling better. Why would there be a North Korean embassy here? Any ideas?
Normally I really need a visa and want to make sure everything goes right at an embassy, but in this case, if the Somalilanders refused me, I wasn’t going to be devastated. I even thought of putting “shifta” (bandit) on the application for my occupation, but decided against it. So when I paid $50 for my $40 visa fee and they asked if they could pay me in Ethiopian birr for the difference, I wanted to know at what rate. They wanted to shortchange me 5 birr (about US 30 cents). I was non-committal about it, saying I might pick up those 5 birr when I returned for my visa in the afternoon.
In possible retaliation the girl slyly dug out my visa application again and asked, “How old is this photo?”
Ouch! That hurt. She was good. That photo was at least 10 years old. I am always trying to fob off ancient visa photos. I tried not to appear unnerved. “One or two years, maybe.”
She looked back at the photo and then at me again with skepticism, so I went on the offensive. I coughed and said with my gravelly voice, “I’m sick. I only look 100 years old now because I am so sick. I feel 200 years old and look 100 years old. And I forgot to shave.” I coughed some more and she was mollified enough to overlook this obvious transgression or she was simply eager to have this bag of germs leave.
When I went back in the afternoon to pick up the visa and said, “Habibi, how about those 5 birr?”, her eyes got big at my chutzpah. I protested, “That’s two and a half injera!” Injera is the national staple food, and economic comparisons to the cost of it always and instantly make sense to Ethiopians, even if they are always and instantly amused at a white guy making the case for it. She had the other woman in the office scrounge around for 5 birr, and when they could only come up with 4.95, I said that it would be OK this time, but I was going to keep my eye on them.
They knew I was talking nonsense but were ready to throw me out of the embassy compound anyway. 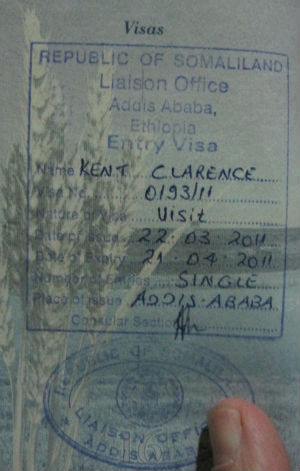 The Somaliland visa stamp. You're telling me you couldn't forge this? They botched my name, but I won't hold it against them.

Two things I learned about Somaliland that give me pause for thought:
1–My visa starts today, even if I don’t intend to go there so soon. No matter when I go, I have to be out in a month from now.
2–Somaliland is an all-cash place: no ATMs, credit cards, travelers checks, etc. I might fly out of there, so I will need a lot of cash to buy a ticket. You would think I would therefore be a juicy target for shiftas.
Quick story: This was the same situation in Vietnam back in the early 1990s. One day our group passed a cement truck that had been robbed and everyone killed right in the middle of the road. The thieves targeted it because they knew they had just made a delivery and had cash. They got away with about $200. I had $800 in cash on me. Everyone in our van was similarly loaded.
Then, as now, there is no American embassy.

Semi-unrelated to anything: This link shows a map of what percentage of people in each state in America have passports. New Jersey has the most per capita and Mississippi has the least. I thought for sure California would have the most.

On the advice of my Italian doctor (I like saying that), I am taking antibiotics, Cipro, to be exact, but three of the past four nights have been hellacious as I try to sleep while in a coughing frenzy. I simply cannot stop coughing. Drinking tea or taking pills provides only temporary relief. It’s horrible, in case you weren’t sure.
I could have relied on the medical advice of the local pharmacist, but I was distracted by her shirt being unbuttoned halfway to her belly button. There are several kinds and prices of the same drug based on where it was manufactured. Do I want it from Switzerland, Cyprus, Kuwait, or India? I went with the Swiss at 75 cents a pill.
If only I could find a buyer for all my phlegm. I would be rich!